Austin Lucas Announce New Album ‘Between the Moon and the Midwest’

Austin Lucas has announced the U.S. release of his forthcoming LP, Between the Moon and the Midwest. The album is out May 27 via Last Chance Records.

When Austin Lucas began thinking about the follow-up to his critically acclaimed 2013 album,Stay Reckless, he had a lot on his mind. The Indiana troubadour wanted to do something not only different from his own previous work, but unlike anything else happening in the realm of country and Americana. Between The Moon And The Midwest marries traditional and cosmic country sounds with sharp, vivid storytelling in a fully realized concept album.

“The songs for the new record began to emerge back in 2011 leading up to the sessions for Stay Reckless,” Lucas says. “It was a tumultuous time in my life. I was on the road virtually nonstop, and my marriage was falling apart. To cope with everything, I started pouring all the pain I was experiencing into these fictionalized characters. Really, I was trying to avoid reflecting on the state of my personal life.”

Two years later, Lucas was deeper into the void, battling crippling bouts of anxiety and depression. Out of desperation, he returned to the old character-driven songs he’d written and shelved, this time with an even darker perspective. Drawing on his life experiences in rural Indiana, Lucas began crafting an intimate song cycle that captured the intricacies of friendship, love and betrayal.

“Writing these songs was therapy through escapism,” Lucas says. “By using characters, I accidentally created an environment where I could speak openly—oftentimes about things that were buried more deeply than I’d normally express. For example, the spiraling depression that cast a shadow over the final months of writing and recording the album. There were moments of frightening and nearly insurmountable darkness that I never would have expressed the true nature of if I’d never had the freedom of fictional characters to hide behind. It allowed me to pull no punches about the anxiety and depression that nearly swallowed me whole.”

Lucas eventually emerged from the darkness with Between The Moon And The Midwest. Citing influences Buck Owens and George Jones, Lucas had wanted to record a straight-up country album since 2011’s A New Home In The Old World. So he enlisted the help of his good friend Joey Kneiser, guitarist and vocalist of Tennessee roots rockers Glossary, and they crafted a sound that—while rooted in outlaw country—was dusted with ’60s psychedelic pop flourishes and recorded using modern indie production techniques. The result is an impeccably arranged record layered with guitar and vocal harmonies, centered around gritty yet hook-laden story songs, and wrapped in a gorgeous atmospheric halo of sound. Between The Moon And The Midwest is truly unique in its mix of sounds, songwriting and influences.

“Sonically, the seeds for this record were planted while I was on tour with Willie Nelson and Jamey Johnson,” Lucas says. “One night I ate a rather large pot brownie and ended up extremely high at night on a tour bus where everyone else was asleep. Traveling through the desert, with only my iPod and a Cormac McCarthy novel to keep me company, my playlist shuffled through songs—first Waylon Jennings, then The Zombies, Buck Owens, Os Mutantes, Slim Whitman, Willie Nelson, T. Rex, Roky Erikson, Songs: Ohia and George Jones. It was a thing of randomized beauty. As the songs played, it came to me that I could make an album that spoke to my obsession not only with all the classic eras of country music but also ’60s psych-pop, ’70s glam and the darker indie songwriters I’ve always adored.”

From the country-gold sound of “Unbroken Hearts” and the infectious “Ain’t We Free” to the plaintive truths of “Wrong Side of the Dream” and “The Flame,” Lucas delivers a record that is at once timeless and modern. Boosted by guest appearances from John Moreland, Lydia Loveless and Cory Branan, Between The Moon And The Midwest finds Lucas at the peak of his songwriting powers, while taking his music into exciting new territory. 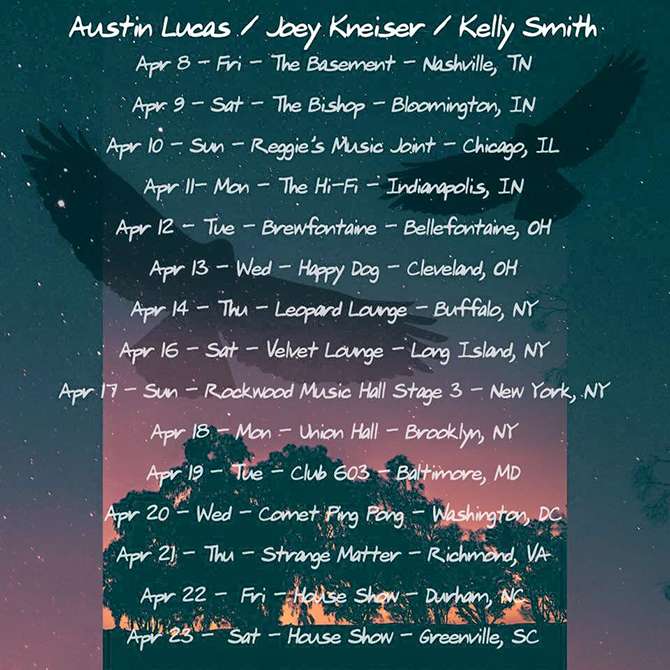