DIY Spotlight: Is This Venue Accessible?

Interview with Sean Gray | By Tim Anderl | Photos by MLloyd

Sean Gray – vocalist of Birth (Defects) and figurehead of Fan Death Records and Accidental Guest Recordings – conceived the website and community builder, Is This Venue Accessible?, out of necessity. “I have cerebral palsy,” Gray explains. “I use a walker to walk. I have been going to shows, be it DIY ones or otherwise, since I was 14 or 15. Growing up, I just got used to venues and places that were not accessible to me. A lot of the time, I would have help from friends, but others, I just wouldn’t be able to go due to the inaccessibility of the venue.”

“In my mid-20s, towards my tail end of college, I started to dive into disability studies a little bit, which helped me sort of ‘own my disability’ and realize the world is inaccessible to me,” he continues. “I also realized that an inaccessible world to me is a form of oppression. Through this, I started to see the world differently. Not in a pessimistic way, but in a way that was realistic. I started to realize that ableism does exist. It may not be front facing, but it was there, and not being able to get into buildings, venues, or other places is a form of that.”

Is This Venue Accessible? really took off after Gray was unexpectedly laid-off. “I was down and out and stayed inside for most of the week,” he remembers. “Around the end of the week, I wanted to get out and see a band I’d been meaning to see for a while. I knew this could be a way to sort of mourn my job. I did what many do today, which is look up the event on Facebook. I realized it was at a place I knew was not accessible. Feeling down and rejected, I got angry.”

“At first, I thought, ‘I could call out the venue or make a big public stink,’ but in today’s web 2.0 world, a lot of that can get pushed down to the bottom. Also, accessibility is not a ‘sexy issue.’ I thought about calling out the band, but that really wouldn’t do much good either. I have been lucky enough through running record labels and playing in bands to be able to go to shows and have a community to help me. I decided that I would map out every venue in Washington, D.C., I have been to. I wanted to catalog what is and isn’t accessible about it and give as much detail as I could. After seeing the data, even I was floored at how many venues were not accessible to me. I live with inaccessibility, but this still did something to me.”

Originally, the purpose of Is This Venue Accessible? emerged as an exercise for Gray to track the accessibility or inaccessibility of places he’d visited or not been able to visit. Quickly, the idea began rolling downhill at a rate impossible for Gray to ignore. He realized it could be a detailed catalog of information about accessibility at music venues for use by others, and that it might also encourage show spaces—both DIY and otherwise—to change if they weren’t accessible. “I started a Tumblr and just called it ‘Is This Venue Accessible?’” he explains. “I just wanted the data for me, really, but as I thought about it, I realized that I also have been lucky to go to venues all around the U.S. and the world. Why not add them too? Why not ask friends to help? It just snowballed from there.”

Today, information for Is This Venue Accessible? is largely crowdsourced. “That’s what is great about it,” Gray beams. “It’s totally built off the backbone of community. It also gives those, abled-bodied and not, a sort of stake in this. It makes it feel like to really help this, it’s on you, the show-goer. At least a few a week come in. It’s been growing.”

Although there is no “one size fits all” solution to inaccessibility in physical spaces, information is valuable and powerful, and it takes a larger community’s awareness and commitment to provide this type of information. “There are certain sites that are doing the same thing in terms of buildings and their accessibility, but many of them tend to try to quantify accessibility, which in my mind you cannot do,” Gray asserts. “What does a 9.0 mean or four stars mean? Disability is a spectrum, and, while this sounds pessimistic, there will never be a building that is truly accessible. Accessibility is about having information and as much as possible. It’s not just about if there are stairs—what about the bathrooms? Going to shows is a social experience, and if you’d like to get a drink with friends or something, but can’t even get to the bathroom, that’s inaccessibility. The venue is cutting off, for many, an important part of live music.”

According to Gray, the size and scope of the venue are also concerns. “One of the big things people tend to forget—even some in the disability community—is invisible disabilities,” he notes. “Just because one does not have a mobility device, does that mean that they don’t have a disability? We just added a max capacity field when submitting a venue, and I think that is super important.” 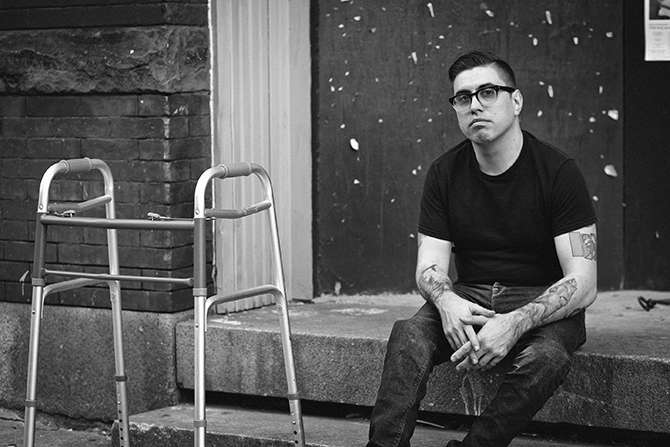 Music fans aren’t the only users who’ve provided Gray with feedback on the site. He says that performers have also used Is This Venue Accessible? when booking shows and tours. “A few artists have told me it has become a useful tool for them when deciding what may be the best place for them to play,” he says. “The biggest thing I have seen is more and more promoters are using it as a tool. It is 2016, if you can put information from ‘all ages’ [to] price to ‘safe space,’ you should have accessibility information or a contact to give that information. I truly believe if you are not even trying to do that, even if the venue may not be accessible, you are screwing up.”

Gray says the issue of accessibility is larger than physical spaces; it’s a question of who has access to art and culture in general. In March, Gray did an unofficial panel at SXSW on accessibility at venues, adding that SXSW rejected it officially and picked a panel on disabilities as a marketing demo of sorts. “One of the questions I asked the crowd, which I believe was made up of mostly abled-bodied people, was: ‘How many of you here have been to a show that has changed your life?’” he recalls. “All of them raised their hands. I then said, ‘Imagine never going to that show, not because you had to work or something came up, but because you weren’t allowed. Would your life be the same?’ You could see and hear people say, ‘No, my life wouldn’t be the same.’ That’s how much music and art can change someone.”

“When you have a disability, socially, you are viewed as not being able to feel certain things like anger, sexuality, and I believe art and culture fall into what we are not allowed to have,” Gray continues. “I am here to change that perception. I am not the only one with a disability who cares about music such as hardcore or noise and wants to be involved. I know for a fact I am not. People say, ‘Well, I don’t see people with disabilities at shows,’ and that’s because we don’t have the information to feel like we are allowed at these shows. I assure you that with information and acceptance, you will see more people with disabilities at shows.”

Moving forward, Gray says that he’s currently in the planning stages for an Is This Venue Accessible? app. “We have some really great things planned,” he teases. “This will be a completely different user experience than just what you see on the site. It won’t be a replication. From front to back, it will be an app that you can use to help you get to that show. We will be doing crowdfunding for it in June.”

In the meantime, Gray is hungry for feedback, not just because it helps him with the project, but because he’s hoping that others with disabilities will be encouraged to emerge as leaders.

“Disability is a spectrum, and my story is just one of millions and millions,” he asserts. “While I feel very lucky to do interviews, I hope me speaking up helps others with disabilities tell their stories, become leaders, and to tell me and others what more we can be doing. That is important and I truly believe that will happen.”

Learn more about Is This Venue Accessible? here.

The purpose of “Is This Venue Accessible?” is to provide detailed information about accessibility at music venues. I hope it also draws attention to the fact that many show spaces–both DIY and non-DIY–are inaccessible, and maybe somehow we can help change that.

There is no “one size fits all” solution to inaccessibility in physical spaces, but information is powerful. If you would like to contribute to venue listings in your state or city and provide information about their accessibility or inaccessibility, or if you have comments or questions, please email Contact.ITVA@gmail.com

For DIY venues ran out of basements/houses/warehouses, etc: please note I will not list an address unless that address is already public. I would though, like to list some kind of contact information. If you see that your address is here and would like it taken down (or vise versa) please email me.