Downtown Boys and Malportado Kids are sister bands, focusing on different aspects of a single central idea. Downtown Boys is a frantic, six piece punk band including vocalist Victoria Ruiz, guitarist Joey DeFrancesco, saxophonists Adrienne Berry and Emmett FitzGerald, drummer Norlan Olivo, and bassist Dan Schleifer that sings about social and racial issues. They also have killer sax. Meanwhile, Malportado Kids is an electronic duo composed of Ruiz and DeFrancesco. They are also very frantic and discuss social and racial issues, but tend to approach these topics from a more personal perspective.

“We’re not communists as per the strict definition of the word,” says guitarist Joey DeFrancesco. “When we say Full Communism, we mean a stateless utopian society. Our music is angry, but it’s also hopeful and we wanted to convey that. Maybe it’s an impossible idea, but we need to believe in it.”

While the band’s lyrical concepts run akin to Crass, their live show is anything but the stiff lipped frown of traditional political punk. Live, Ruiz is a dynamo. She flies around the room, bouncing off the walls and snapping around like lawnmower blade. She’s one part Ari Up, one part Poly Styrene, one part Alice Bag, and one part Annabella Lwn. That is to say, she’s berserk.

As she sings, she’ll fly away from the beat, spitting out tangled, sharp lines about race relations and class structure, sometimes snapping back to the rhythm and sometimes abandoning it all together. Meanwhile, DeFrancesco stands just to her left, shouting out responses to Ruiz’ treatises, in a chaotic one-two punch. And during the whole thing, the band smashes along, sometimes using the three chord thrusting of punk rock and sometimes abandoning structure altogether in a wonderful, cacophonic mess. The saxophones in the band—which constantly blurt out nasty notes—only make the whole thing that much more unpredictable.

Ruiz, who often sings in Spanish, focuses on the Latino identity in her music. “The Latino identity is super variable right now,” she says. “For example, neo-liberalism has made it so that we ‘want’ to see Latinos in suits and ties. They ‘got out of the hood’ and no longer have an accent. Rather, the American identity must be seen as different because of the Latino population.”

In fact, fighting the status quo runs through Ruiz’s blood. She says, “The reason that my great grandparents emigrated from Mexico to America is because they were getting paid to hide people out. They weren’t political; they were poor and just needed the money. My great grandpa got in a fight with someone, because they suspected he was being paid to hide someone. They said they were going to hurt my family, so they came to the United States.”

Both Ruiz and DeFrancesco are involved with community activism. Ruiz works to improve the treatment of bank tellers and call center workers, while DeFrancesco is part of a boycott to improve the treatment of workers at the Renaissance Providence Hotel. If you poke around YouTube, you can find a video of him quitting his job at the hotel while a complete marching band follows him as he marches out the door. Of course, ever the dynamo, Ruiz literally bounces through parts of the video.

“I’m not that interested in transforming ‘punk’ into a better thing,” DeFrancesco explains. “What’s more interesting is when we can bring together all sorts of people who would be punk or people who like politics or people who like to dance, and they can get involved, even if they have asymmetrical hair or not.”

“There is no barrier between culture and politics,” Ruiz continues. “Our music is a means to an end. We’ll give up our ‘cool factor’ live so we can talk about racial profiling or minimum wage. We definitely want to use every moment that we can when we have people together.” 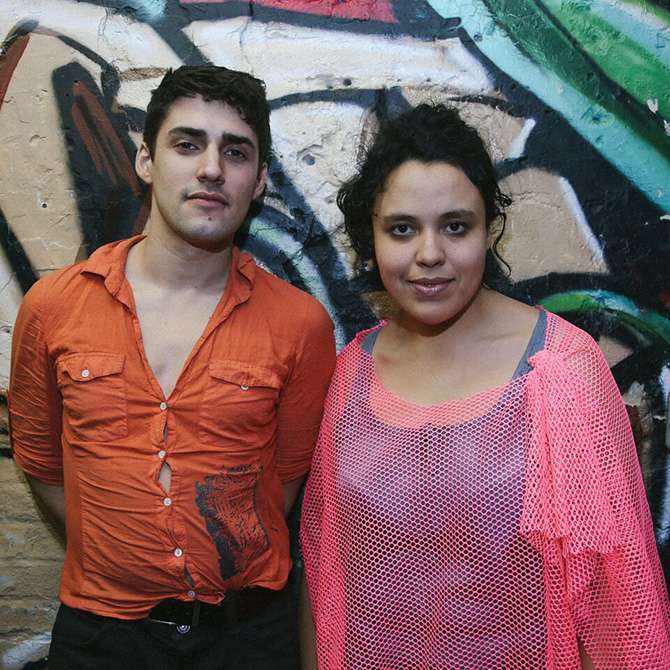 Malportado Kids is the hyperactive, ADD-jarred, erupting sister to Downtown Boys. An electronic duo composed of Ruiz and DeFrancesco, Malportado Kids base their music in Cumbia: a high energy, percussive, South American genre that mixes pre-Columbian music with pretty much everything else. “Malportado Kids is dirtier,” Ruiz says. “It’s not as ‘classic.’ The songs are mostly in Spanish and are meant to be strategically divisive to the status quo.”

“We’re talking to all sorts of people,” DeFrancesco continues. “By putting those songs in Spanish, there is a targeting of the Latino audience that has not been reached out into punk rock music. But, it’s also for everyone involved in the system. Everyone needs to address the currents system at work and how they are defined by it.”

Ruiz adds, “Malportado Kids is for retaking and reclaiming ideas that have been used to describe the throwaways, the not-so-great ones, the misbehavers.”

The group’s upcoming June 2 release, the Total Cultura 10” available via Dead Labour, makes this transformation of ideas its focus. In fact, one of the releases’ fundamental points is that culture—not politics, not economics—is what drives human behavior and change. “Culture determines everything that we think,” Ruiz says. “That’s why art is so powerful. It washes people’s minds, for better or for worse. Total Cultura, which is ‘total culture,’ means that everything that we want to be for and by the people, we must take through culture itself because culture determines everything.”

One of Total Cultura’s most arresting moments comes when the band closes the release with a cover Bruce Springsteen’s “I’m on Fire.” On the track, the band reclaims the central message by replacing the E Street Band’s blues based heft with a Kraftwerkian synth track. Then, the Boss’s gentle, dusty voice is tossed out in favor of Ruiz’ striking howl.

“First off, we love Bruce Springsteen,” says DeFrancesco. “We are obsessed. We are very pro-Bruce.” As DeFrancesco says this, Ruiz shouts out, quite loudly, “Obsessed!” DeFrancesco continues, “We are inspired by his energy and political content. A lot of his music is about personal stories of desperation in the face of economic oppression. He usually works from a white working class perspective. It’s this day to day struggle that [comes] across beautifully.” Ruiz and DeFrancesco are so obsessed with Bruce that, in a nice bit of symmetry, they also close out the new Downtown Boys LP with a different boss cover.

While Malportado Kids seem to be having a bit of fun appropriating the New Jersey legend, the focus of Total Cultura comes from a more personal space. In fact, all the other tracks are in Spanish and most of them don’t rely on reference to outside sources.

Ruiz explains, “In Downtown Boys, I feel an urgency with how we relate to oppression as groups of people. But, in Malportado Kids, it is much more a personal reaction to how I am treated by structures of supremacy. Take my mom, for example. Because she’s Latina, people make certain assumptions about her. But, she’s usually not those assumptions at all. When I was younger, I didn’t have many friends to go to punk shows with. I would find out about punk shows in these weird ways, and my mom would drive me to the shows and wait in the car for me until it was over. She’s always been very supportive of what I do. Her upbringing in life was very different than that of my grandmother, so I don’t think she has expectations for me.”

“Also, people have expectations of me,” Ruiz continues. “We have a song called ‘Chingona.’ That word is used to describe a ‘dirty punk.’ It’s not something thought of to be powerful or intelligent. I want to reclaim and redefine that identity.”