Whether you were stockpiling canned food in preparation for Y2K or dancing your ass off to Prince, 1999 was a hell of a year. Twenty years later, End Of The Century looks back at some of the most iconic albums to drop right before the new millennium… 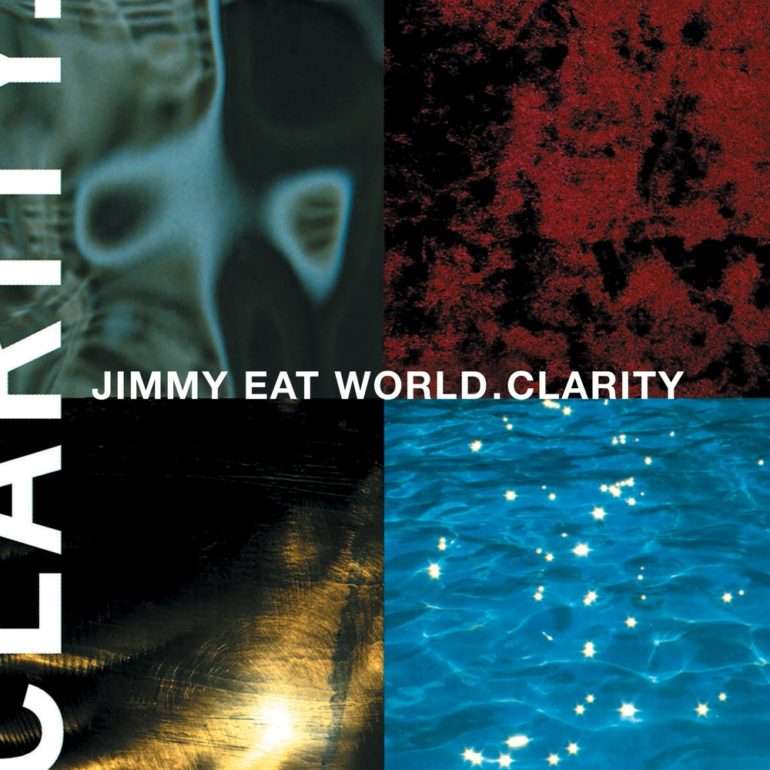 We need a new word to describe the record in a given band’s catalog that came out right before the one that blew up. These are often the entries that longtime fans claim are the actual best albums in that band’s discography, even if sales figures disagree. Think along the lines of Deftones’ 1997 sophomore full-length, Around the Fur, and its nu-metal-mutating follow-up in 2000, White Pony, or At The Drive-In’s In/Casino/Out from 1998 living in the colossal shadow of 2000’s Relationship of Command. The breakthrough albums get the most attention, but the ones diehards hold closest to their hearts are the raw steppingstones that came along the way.

If there’s one emo—to use that term loosely—album that embodies this phenomenon the best, it has to be Jimmy Eat World’s Clarity. It was the band’s second major-label release, following 1996’s Static Prevails, back when the genre was first gaining a foothold in the mainstream. No one quite knew where to place the record when it was released in 1999, up to and including Capitol Records, who were ready to part ways with the band after taking two swings at commercial success and whiffing at the plate twice in a row, allowing DreamWorks to pick them up and cash in on 2001’s explosive Bleed American.

Too challenging for mainstream rock radio but too polished for the underground, Clarity found its fans, but it wasn’t immediately received as something that would eventually become a rite of passage for generations of kids discovering emo beyond the t-shirt wall at Hot Topic. According to Wikipedia—not the most trusted of sources, but we have little else to go on here—it was initially panned by Pitchfork in a review which appears to no longer be live, while a now 17-year-old comment thread on a 2001 review from Punknews.org has preserved an—at times crass—debate over its relative merits. It’s safe to say that underground opinions were split at best, while mainstream attention was nearly nonexistent.

The next part of this story, however, was well-documented. Frustrated with the lack of promotion, Jimmy Eat World bought their records back from Capitol and struck out on their own to write their next album. Without anyone else’s expectations placed on the end product, they went wild and wrote whatever the hell they felt like. DreamWorks rolled the dice on the results, and that gamble paid off when Bleed American’s lead single, “The Middle,” spent 36 weeks on the Billboard chart, peaking at number one for four weeks in the spring of 2002.

Ironically, the road to radio success was paved with do-it-yourself grit, but in the process, the band had become more polished, moving away from their noisier roots toward something closer to power pop—which earned the album a 3.5 out of 10 in a scathing Pitchfork review. Whether the indie rock scene at large cared ultimately proved irrelevant as the band dominated the airwaves, joining acts like Dashboard Confessional and, shortly thereafter, Taking Back Sunday in bringing something that vaguely resembled emo—and even if it sounds like it, that isn’t meant to be a slam—to suburban malls and MTV.

Such an extreme stroke of fortune is nearly unprecedented even now, but while Bleed American was cementing itself as a cultural cornerstone, Clarity’s notoriety slowly simmered in the background. It was the record your more pretentious friends would tell you was the “real” Jimmy Eat World, the one that made you feel like you knew something casual fans didn’t—even if Bleed American was how you heard them first, and especially if you wouldn’t admit it. To understand just how universal that experience is, British emo band Moose Blood even dropped the line “I’ll introduce you to Clarity” on the track “Bukowski” from 2014’s I’ll Keep You In Mind, From Time To Time. (Note: That band’s history of sexual harassment allegations is worth mentioning for anyone unfamiliar.)

Of course, it’d be reductive to say that Clarity is nothing more than the obscure predecessor to an album that outsold it by several orders of magnitude. Sure, that lesser-known mystique is part of the appeal for some, but there are deeper reasons why it’s endured as a classic in its own right.

Give the record a spin, and after the dulcet opener, “Table For Glasses,” the bass-heavy intro and verse of “Lucky Denver Mint” quickly give way to an earworm of a chorus that manages to be hooky and dynamic without relying on the stark and cliché quiet-to-loud changeup so prevalent on radio rock circa 1999. According to Ian Cohen writing over at Stereogum, that wasn’t by accident: This was supposed to be “the hit.”

Perhaps ironically, the next track, “Your New Aesthetic,” alludes to dissatisfaction with what mainstream music outlets were giving airtime—possibly the same outlets that would later help propel the band into the stratosphere, and the song’s listing on SongMeanings.com has preserved a back-and-forth debate about that point from 2002. It arguably isn’t until the fourth track, “Believe In What You Want,” that Clarity presents the immediacy and accessibility of something resembling a single, with its sparkling guitars and soaring melodies perfectly embodying the record at its most moving.

By the middle section, it becomes clear the album is never going to settle into a comfortable sense of rhythm: “A Sunday” calls back to the bells from “Table For Glasses” while sticking to a mid-tempo pace, while “Crush” quickly picks the energy level back up before “12.23.95” takes things in a more chill direction. At this point, one can easily envision a Capitol exec listening for the first time, wringing their hands over what the hell they were going to do with this record, hoping something would jump out of the speakers.

That moment comes with “Blister” near the album’s end, an anthemic track that invokes a defiant attitude against the world with the line, “And how long would it take me to walk across the United States all alone?” If you were to tour across the country, only to play mostly empty venues while a major label expects a return on their investment, then it’s easy to imagine that’s the kind of question you’d start to ask yourself. Regardless of the track’s actual inspiration, it’s one of the most powerful hooks on the album, offering a triumphant blast that permanently etches itself into your long-term memory.

If writing a record without many obvious hits and featuring lyrics laced with dashes of cynicism wasn’t a surefire way to test the limits of emo’s economic viability outside of the all-ages basement show scene, then capping it off with the 16-minute jam “Goodbye Sky Harbor” certainly was. It’s easy to overlook how daring a move that could have been, especially given how iconic the song has since become, earning a reference in The Wonder Year’s “Solo & Chewy: Holdin’ It Down.” Much like the narrative surrounding the album itself, it’s the definition of a slow burn, riding a singular extended, looping melody line as the record fades out.

The fact that one of the most popular pop punk bands of the past decade would cite the final track from Clarity might tell us more than anything else about the album’s real legacy. It might not have been Jimmy Eat World’s biggest success by any objective measure, but it may have been the one that inspired your favorite musicians to start bands—particularly if you’re someone who reads New Noise. Twenty years later, you can still hear traces of its influence all over the rosters of most modern emo-adjacent labels, striking a similar balance between accessibility and abrasiveness.

With that in mind, though Clarity’s impact was not the loudest, it’s the one that will likely stick around the longest. We don’t have a word that summarizes that kind of record concisely, but maybe we don’t need one. Maybe just calling it Clarity will do.