Exclusive: Hatchet Tour Diary – On The Road with Doyle – Chapter 1

Hatchet have hit the road for a tour across the United States opening for Doyle, and in the spirit of keeping the world informed, we’re hosting a tour diary with the band. Check out the first entry below, and go here for all their tour dates and ticket info.

I [Clayton] volunteered to head our tour diary series for the simple reason that I need an outlet to express my perspective of the #tourlife and all it’s horrid glory. Unfortunately, my writing style always reflects my current mood, so please forgive me as I cycle through the emotional spectrum over the next seven weeks.

Life on the road is funny. It’s only night 2 of the tour (Trenton, NJ), but it’s already been over a week since I kissed my parents, girlfriend, and dog goodbye. The beauty of starting a tour in New York when you’re from San Francisco lies in the four days of straight driving followed by another four days of rehearsal at Kody’s house in Pennsylvania (Thanks Barba’s!!).

The one thing that truly resonated with me on the trip East is how difficult it is to connect with anything…in the way you make meaningful bonds when you’re home. It’s like life is on standby, especially when there’s no show in the immediate future to look forward to. For example, Ben and I met a gorgeous Alaskan Husky and his happy family at a truck stop in Iowa – an encounter that served as a depressing reminder of how far away my dog, and the rest of life outside music, really is.

Yesterday (Tues. 9/22) I woke up from a three-hour nap just in time to wait another three hours for an interview in Manhattan. Julz and I met up with the awesome Leo (of The End Records), who took us up to the Eleven Seven office HQ to speak with Louder Noise about the new album and some adorable internet cats. Luckily, we were able to walk around a bit and see all the framed Five Finger Death Punch, Papa Roach, and Motley Crue records they had lining the walls. Immediately after the feature, Leo led us into the heart of Brooklyn to meet the rest of the fabulous staff at The End. Following a quick tour, pizza party, and rooftop-smoke-sesh, we were bound for St. Vitus for the official first show of tour.

Here’s the thing: I’m a homebody. I love being at home, being a recluse with my girlfriend. And I know I have a tendency to write melancholically, but there’s a reason I’m out here. The first show of tour was the most incredible reminder why I’m about to spend two months living in a van. Brooklyn sure as shit brought their A game (on a TUESDAY night) for some long-hairs from SF. Crowd response was incredible from the get-go, even for the new material, which gets me excited as fuck for this album to finally drop next month. The cherry on top of the ego-sundae came from The End’s president, commenting on how solid the new lineup is and how heavy we hit live.

…And that was just the first show. 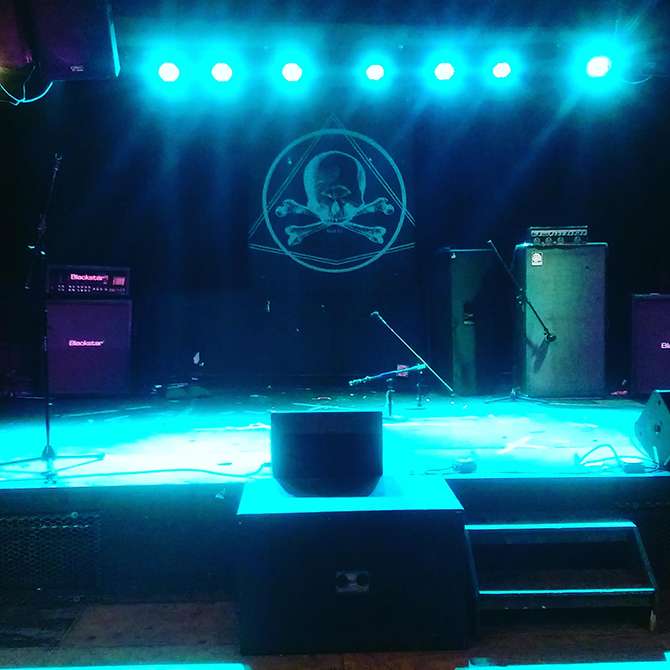