Fat Wreck Chords Bands Share Some of Their Favorite Memories

My favorite Fat story is when Fat signed NOFX. I asked NOFX if I could put out our records on FAT and leave Epitaph. They asked me what kind of a better deal could NOFX get from FAT. I said nothin. I said I will give them the same exact deal Epitaph gave us. They asked me why should we switch to Fat when Epitaph was a great label. I told them that I would be making the profits off NOFX instead of Mr. Brett. I told them that I couldn’t give them a better deal, but that I would be stoked. The three other members had a meeting and said to me,”sure”. How fucking cool is my band?

My favorite Fat memory is seeing Mike in Vegas for Punk Rock bowling a few years back . We had just finished a really long grueling tour and hadn’t  spoken to Mike in a while . We were long overdue for a new album and weren’t  quite sure where we stood with the label or even with each other .  I think Mike could feel our uneasiness and after watching our whole set came back and told us how much we meant to him and the label.  It was exactly what we needed to hear evidentially  because it led to one of our best records in years , Transmission . Alpha .Delta . It also led to a renewed sense of family within our band and the label . I get this feeling everytime I hear of a hard working band complain about their label situation and I am thankful.

When Useless ID went over to the U.S for our first time, back in 1996, We played as many shows as we could in the Bay Area… 924 Gilman street, Berkeley Square, Bottom Of The Hill…just to name a few.
We would have been a homeless band if it wasn’t for the kind people of the Franklin house in S.F that took us in and let us ALL stay with them at their sweet punk rock house.

Devon and Floyd from the Franklin house used to work at Fat Wreck and as soon as they took us over to the old Fat offices it became one of our favorite spots to hang out, buy records and bug Fat Mike with our ultimate goal – “Bringing NOFX to Israel”.

I still have all the records that I bought at the old Fat warehouse (often from Chicken of D.T.M!) and yes, we totally convinced Mike to come to Israel with NOFX, but more than anything the great memories are bigger than anything else that went down.

The Gorge in Washington, Warped Tour 2001.  Everyone was watching Me First from the stage, the sunset was amazing as the stage looked over the Gorge.  I climbed up on top of some sound equipment to get a better view of the show and crowd.  He won’t remember, but Fat Mike turned around while playing and looked at me with a, “what the fuck are you doing, look”. I knew then that we would be friends one day.

And her favorite releases
– Lagwagon:  Duh, Hoss, Let’s Talk About Feelings.
– Against Me: As the Eternal Cowboy, Searching For a Former Clarity
– Masked Intruder Self Titled- when I’m sad about a boy I play, “Why don’t you love me in real life” over and over again while I get ready to play my own show.
– Home Street Home: Songs from the Shit Musical (very special to me as this is part of my life’s work and I left my heart on the studio floor singing the part of “Sue”)

Want this in writing? Then grab the print issue by clicking the image below!
The issue comes with an exclusive Fat Wreck CD comp! 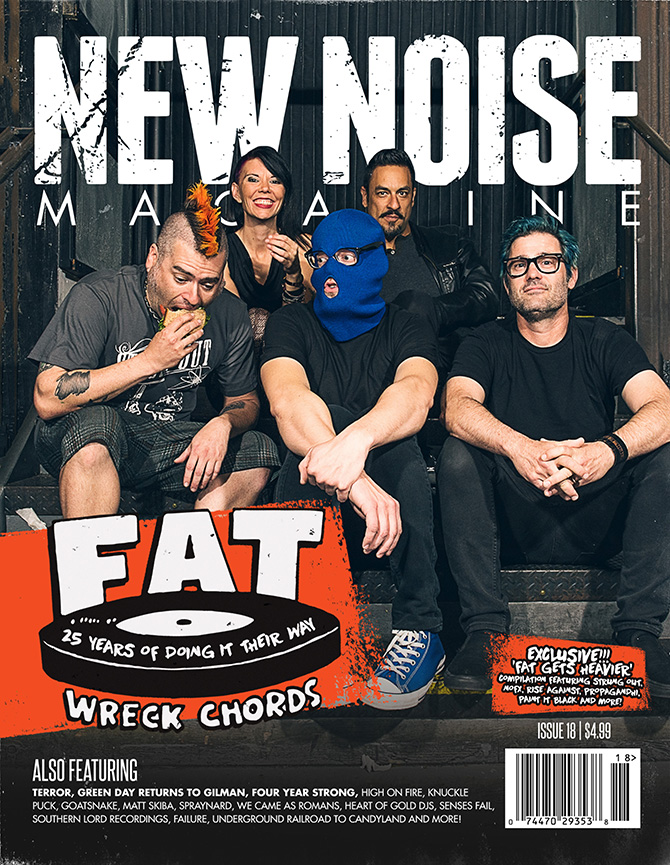 Fat Wreck Chords is celebrating 25 years of being alive with a HUGE Fat Wreck Tour. Purchase tickets, see who’s playing and where, here.

The label is also holding a 25 year anniversary party in San Francisco. More details on the event here, or by clicking the image below.