Audrey Zee Whitesides is a New Yorker by way of the South, an embodiment of DIY punk ethos with an academic background in poetry, and an artist with the ability to make slyly political statements in a deeply personal and irresistibly relatable way. She is a multi-instrumentalist, lending her vocal, lyrical, and guitar prowess to the queercore/transcore trio Little Waist; playing bass for the momentous punk rock darlings, Worriers, and incisive singer-songwriter Mal Blum; and helming her own acoustic solo project as Audrey Otherway. 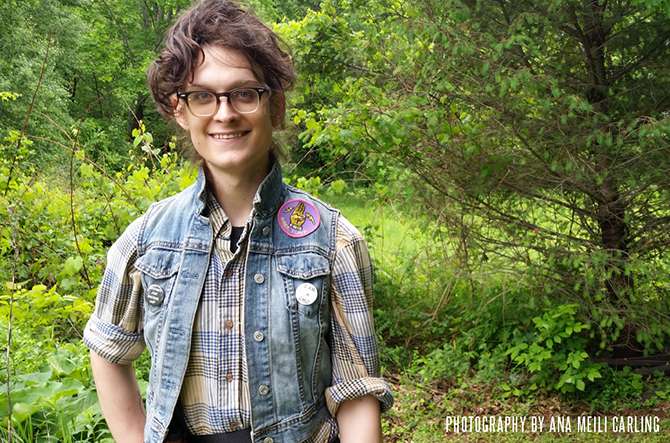 On Ability and DIY Culture:

I have scoliosis, which, as a condition, is far from the most debilitating thing. [It’s] something that isn’t fun to deal with as a musician, but also is mostly manageable. Mostly, it just means I am generally in a little bit of pain and, sometimes, in a lot of pain; can’t do any heavy lifting or be at band practice for too long; and when I’m on tour, I have to bring a good air mattress and lie down in the van when I can. Fortunately, I have bandmates who understand this and make sure to help out and have someone else carry the amps.

But, it also means I have to be really careful about what I do with my body, and people in DIY don’t often expect to accommodate other people’s physical needs. I definitely have dealt with lots of venue employees or even fellow musicians who I ask for help carrying something or getting it on the stage, only to have them shrug and be like, “Oh, that isn’t that heavy. I’m sure you can get it if you try.” Which, like, no, I can’t, unless I really want to be in pain.

Venues aren’t really set up for people who experience pain. Even on a good day, I have a hard time standing up for two hours without getting sore. So, if a venue doesn’t have seating, it means there’s a good chance I’m not going to feel very good if I try to go to the whole show. Either I have to go early and leave before the end, or miss the first bands and just see the headliner. On a day when, for example, I had work earlier, my body just can’t do it and I miss a lot of shows. If I do go to shows, there’s always a chance of getting knocked into by people dancing—I never go to hardcore shows, even though I like hardcore—or getting told by band members to stand up and get closer when it’s like, “Yeah, I’d love to be able to see you, but I don’t feel so hot.”

When I play, often standing up for the 30 minutes my set lasts is about all I’ve got. So, I end up missing out on other bands while I lie down in the van [or] green room, and miss getting a chance to just be a part of the crowd.

But I also feel like my experiences—which, again, are manageable, and, while I have to give up some things, I can still play shows and access venues—really just highlight how DIY has a lot to do in terms of meeting physical needs. I can make things work only by advocating a lot for myself and apologizing a lot for what I can or can’t do, and I am a relatively able-bodied person. It’s hard to come up with concrete solutions for making punk accessible. Like, if a prominent venue is in someone’s basement down a flight of stairs, that’s not necessarily due to anyone not caring about that space’s accessibility, it’s just the only thing they can afford to do.

I guess all I know to ask for is for people to try to think about what expectations they bring into spaces—do they assume everyone can handle equipment as easily? Do they assume people aren’t real fans if they are sitting in the back instead of dancing in the front? Do they assume it’s OK to have every space they book be upstairs just because no one has ever complained about it?—and work from there. I really believe if people asked all these questions, we could see some important change.

Talking about intersectional punk stuff, we always have to consider physical ability. Which, in some regards, is way harder than, for example, making punk queer inclusive, because it requires such an overhaul of physical spaces rather than just putting different people into those spaces. Not that [queer inclusivity] isn’t a huge challenge too, but it definitely is easier to think or talk about, I think. 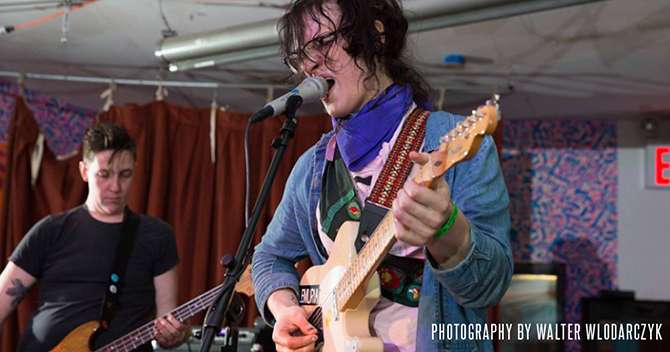 I have a really strong desire to find a sense of home through my communities. As a queer trans woman, I feel really distanced from the Southern small towns I grew up in in Kentucky, South Carolina, and Virginia, and, while I do enjoy living in Brooklyn, it doesn’t necessarily feel homey or open to me. Sometimes, I feel like exiling myself from the South means I’ll never really feel at home—either lonely, isolated, and scared where I’m from or longing for something I lost somewhere else.

I do really feel so much kinship and a sense of family with queers across the country. It’s always a little easier to choose someone as family if they don’t trust their birth family or place of origin either. Of course, lots of the people I think of as chosen family—like my roommates and bandmates and partner and best friends—are mostly both queer and DIY musicians, but I do feel connected to so many people in DIY regardless of identity. I think the kinship I feel with people in DIY music in general is different, but definitely still there. Growing up in the South, I had ideas about hospitality and doing stuff econo around me, and it feels familiar and homey to have total strangers open up their homes across the country, just doing the best they can with what they’ve got and totally willing to share.

I don’t know if I’ll ever really feel at home anywhere unless the South becomes a lot more welcoming, but maybe a lot of little pieces of home across the U.S. make up for the lack of one central home.

I want to shout-out country music, which I love so much, from the classic stuff it’s cool to like—Willie Nelson—to the bro-y guilty pleasure stuff—Florida Georgia Line—to the straight up pop that’s as good and catchy as anything on Top 40—Little Big Town. It’s a big part of my musical make-up. Special shout-outs to all the women who keep it so real and express emotion in direct, heartbreaking, and vulnerable ways—there aren’t many albums I like more this year in any genre than Ashley Monroe’s The Blade or songs more tear-jerking than Cam’s “Burning House.” Also, [country is] a genre where women regularly make scene anthems out of feminist revenge songs about horrible men, which never happens in straight up pop and even rarely in punk. What more could you ask for?

PrevExclusive: Read Gnartoons’ Comic Taken From ‘As You Were’ Volume 4
Tour Diary #2: Hodera Tour To SXSW And BackNext