FQP shines a light on the joys and heartaches that lie at the intersection of the LGBTQIA+ community and the world of alternative music. While queer representation is often refracted through the prism of normative curiosities and concerns, FQP features queer voices saying whatever they want, however they want. Don’t fear the realness.

“When you become the image of your own imagination, it’s the most powerful thing you could ever do.”
– RuPaul Andre Charles 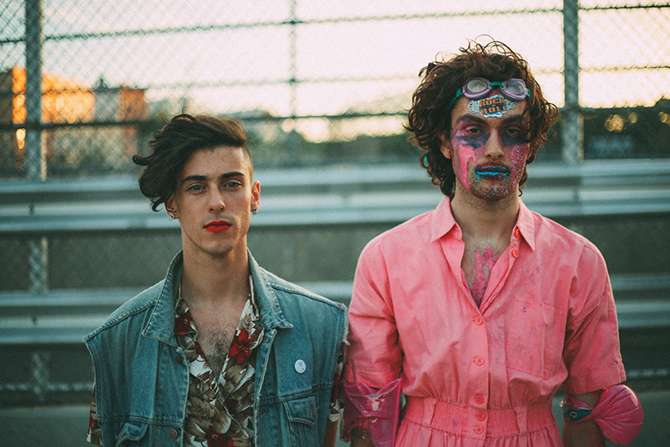 New York’s preeminent “genre-queer” duo, PWR BTTM, have become the image of their own imagination, a harmonious blend of fuck-you drag and openhearted punk. Liv Bruce and Ben Hopkins seem to possess an instinctual understanding of the oft overlooked motivations behind the cultures they so seamlessly blend—the way punk’s high masculine aggression helps disadvantaged youth feel powerful and how the high femme fierceness of drag allows marginalized people to transcend their cultural bondage. PWR BTTM effortlessly embody this shared ethos: that artifice allows us to tell the truth about who we really are. Pick up their new record, Ugly Cherries, via Father/Daughter and Miscreant Records, and catch them in November on their East Coast/Midwest tour with Mitski and Palehound. After that? “Our deaths,” adds Hopkins. “Look out for our deaths.”

BH: In a way, our music is for queer people, sure, because we’ve taken conscious steps to be transparent in our use of [gender neutral and queer] pronouns and subject matter. But, ultimately, it is, in a way, for anyone who feels misunderstood. That philosophy comes from an acting teacher of mine in college named Jack Ferver, who uses it as his sort of artistic mission statement. He says that the purpose of art is to take your personal myth—like, your story—and relate it so that it becomes iconic, or bigger than your own personal story. Ours are queer stories, but I think what we’re trying to say is, like, if we do our jobs right, it’ll be bigger than even just that, and [since] music is always inherently figurative, we try to tell queer stories in really big ways, so that they can go beyond the specifics of our personal lives and infiltrate other things we can’t possibly predict.

LB: I have a couple of distinct memories from when I was figuring out my sexuality around the same time I was figuring out my interest in playing the drums. I was very worried that I would never get to be in a band or write songs that people wanted to hear, because no one would relate to them… Because I was, you know, such a freak. I knew about Freddie Mercury and Elton John, but they seemed like exceptions to the rule. The rule being, “Queer People Can’t Rock Out.”

So, I guess what I’m getting at is that I’m trying to write the songs my younger self would have taken comfort in hearing.

BH: When we were starting out, I personally felt like it was very easy for people to see us as a gimmick. Like, not only as a queer project, but as a queer drag thing. There’s this story Maria Bamford tells in “The Comedians of Comedy” about how there was this comic when she was starting out who always wore a Hawaiian shirt, because his opening joke was about the Hawaiian shirt. I think it was easy for people to see us as that sort of weird thing. But that sort of compelled us to really push our craft. For me, specifically, I spent, like, a solid year playing guitar every day, a few hours a day at least, and that sort of otherness really brought a sort of purpose for us to prove them wrong even further. The only advice I’d give people is: don’t try to be “different,” strive to be honest. Our honest is queer drag punk; it’s what we need to say right now. It’s what makes us different and relatable—hopefully—at the same time, because it’s just what we want to say and how we want to say it.

LB: I think it can be very scary to put yourself out there, but it’s so necessary if you want to find your people. Many of the people who have been very supportive of us are people who came up to us after shows and said something. Just from a practical standpoint, standing on a stage in a room full of people and telling them your story—through song or otherwise—is the most efficient way to link up with people whose stories have something in common with yours.

BH: We literally just keep mentioning Alyssa Edwards in these interviews and she won’t, like, love us. We used to watch “Alyssa’s Secret” before every show. I would say “Drag Race” has provided a weird language for us. Like, queer people have always been creating a language for ourselves. “Drag Race” and its infinite quotability equal a whole vocabulary we share.

LB: Ben can say to me, “I feel very attacked,” and I know that he means he specifically feels the way Laganja [Estranja] felt in that episode of [the RPDR after show] “Untucked.” I can tell Ben that something was the “face crack of the century,” and he knows it was an event akin to Alyssa seeing [her rival] Coco [Montrese] walk in.

BH: It’s like a weird half-meaningless, half-completely-meaningful thing. It’s code. It extends beyond “Drag Race” into movies like “Paris is Burning” and “The Queen” and, like, queer ephemera of all kinds.

LB: Queer people have spoken in code for, like, ever. Someone told me recently that gay men using female pronouns for each other is a relic from the early days, when they could be fired, shunned, or killed for talking about a male sexual partner. And, even though Ben and I make a point of being as indiscreet as humanly possible in our work, talking in code is still in our cultural lineage as queer people. And, thank God! We’d be nowhere today without those queens of the earlier days, talking about their boyfriends with female pronouns at the watercooler.