Fear Of A Queer Planet Featuring Felix And The Future

Some people look at the night sky and feel small, quivering in terror at the vastness of the universe. They shrink at the thought of the cold, soundless vacuum of space, littered with long-dead stars that still haunt our view.

Others gaze at the night sky and feel wonder, marveling at the boundless explosion of glittering celestial bodies, the infinite galaxies, the uncharted depths of existence.

Under the dark indigo tapestry of a night sky—at least, the sections that aren’t obscured by towering skyscrapers—Felix And The Future just looks up and sees home.

Spiritually caught between the moon and New York City, Felix is one part Brooklynite singer-songwriter and one part bona fide Moonman. Suited up in an avant-garde aesthetic and equipped with challenging high-concept theatrics and a warm, gently wavering voice, he explores all the facets of New York nightlife and the Milky Way and incorporates them into his grand cosmic opera.

His most recent release, Holy Hands Vol. 2—released via Coconut Shake Records on Feb. 2, but recorded in the distant future, naturally—charts his travels through space and time as he interacts with a cast of vivid, surreal characters and slips into blackholes of doubt and deception. The record’s musical backdrop gestures toward artists ranging from Kate Bush to Bat For Lashes to David Bowie to Hedwig Robinson. The 10 tracks swell with humming strings, robust synthetic pulses, and percussive electronic heart murmurs, all supporting impressionistic lyrics and vocals that shun perfection in favor of volatile, unpredictable emotion.

The record may live, as all records do, in the aural realm, but the totality of Felix And The Future comes into focus with the addition of its visual counterpart. The Michael St. Onge directed music video for the album’s opener, “Karen,” is a perfect primer, containing all of Felix And The Future’s crucial elements: horror, danger, glamour, power, gloss, grime, truth, artifice, drag—notably, Brooklyn’s Untitled Queen and Lady Simon—hypersexuality, and a queering of religious ritual that sits in conversation with the Mexican-American artist’s Catholic upbringing and his experiences traveling through Thailand. Yet, the final product transcends such atomization, coalescing to evoke primal gut feelings, as things that are totally alien often do.

When you don’t fit into a box, most people either try to force you into one or they ignore you altogether, because their brains aren’t wired to accept the unexpected. I write music to express the most extreme version of myself. That version changes from song to song. Felix is both a sensitive, cosmic crooner and, also, a hyper-violent banshee that lives on the moon.

The internet offers you the ability to connect with such a large audience and can also make you feel incredible insignificant. But sometimes, it connects me with strangers in faraway places. The uplifting moments are the messages that I get in the middle of the night from listeners in Florida or Frankfurt or Jakarta. Or the strangers who wander into my show and connect with me while I’m performing and offer me their beautiful openness.

On What People Should Knock the Fuck Off

I’m sick of wealthy, privileged, well-connected musicians [and] artists saying in interviews that it was an accident that they got a career—that it just fell into their lap. Fuck off. Who is that supposed to inspire? What do you actually stand for? Apathy?

The one good thing my dad did for me was accidentally take me, my cousin Zieke, and my brother Jesse to see “To Wong Foo, Thanks for Everything! Julie Newmar.” He had no idea what it was. We did. We lived for that movie. That movie stirred a rebellion in me like no other.

There was an old man who lived in an apartment in the Upper West Side with a view of Central Park. His building was sold, and the new owners tried to kick him out so they could remodel and charge millions of dollars for the new units. They did everything they could to drive him out, but he was a stubborn old coot. He knew his rights, and he wasn’t going to move his whole life just because some multimillionaires wanted to make more money. He stayed through the construction for years, and, finally, they caved and offered him 17 million dollars and a new apartment a few blocks down with a better view of Central Park that he would only be charged one dollar [per] year for rent. He is the true spirit of New York City. 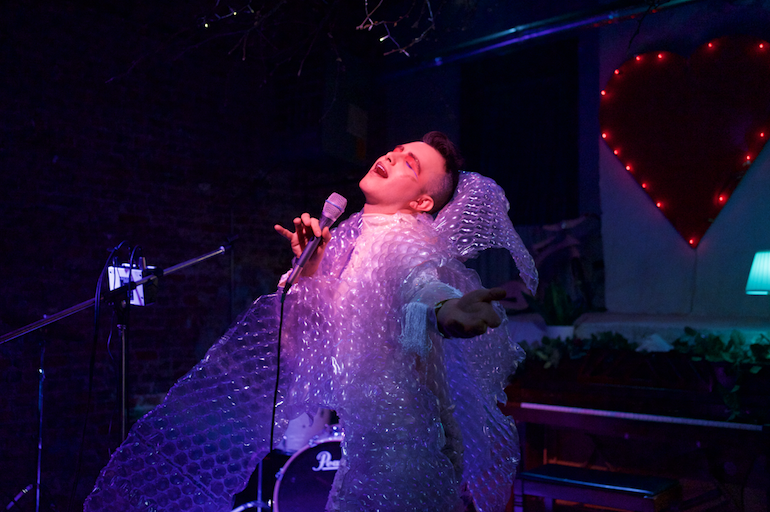 I think every artist who is making work that is personal is blazing their own trail. Creating anything that comes from within is all about creating your own yellow brick road, brick by brick. It might lead you to Oz, or it might lead you to Hell.

As for me, I make my own costumes, I write my songs, I direct my videos, and I try to use every facet of my artistic ability to speak from my point of view. My work can be polarizing—and sometimes, difficult to digest—but I don’t give a fuck. I’m not going to dumb down my work emotionally anytime soon.

I’m a Moonman with a plan. I cough up glitter after my shows. There’s a lot about me that sets me apart from my contemporaries, but I’m mostly looking for those things that bring me together with other artists and listeners.

On Self-Care and Community Care

I do yoga, meditate. I avoid dairy to keep my voice healthy. I bathe in moonlight to keep my feminine mystique.

I try to see queer performances at least once or twice a week, whether that be drag, music, acting, or just the late-night drunkard grinding on a pool table wearing a shake ‘n’ go.

On What He’d Rather Be Discussing

I will watch any horror movie. My first movie memory was “Night of the Living Dead.” My grandma and I watched horror movies my whole life. She raised me on the macabre. We also used to hide and scare each other all the time. One time, I thought I gave her a heart attack, because she turned red and grabbed her chest. I started to call 911 before I heard her laughing at me. She was pretending. She was a sick, sick woman. And I loved her for it.

On What Keeps Him Up At Night

Will Daenerys Targaryen sit on the iron throne? Or will she self-sabotage?

What is glitter made of?

Can glitter cause Black Lung?

Should I go to the gym more?

Should I be touring more?

Should I have made it by now?

Have I failed at life?

What about Sansa and Arya? Are they gonna share the throne?

On Finding Your Place in the Universe

Before I was a Moonman, I was just a simple Earthling. Who got beaten and kicked around and called fag and was laughed at for not being what I was supposed to be. I tried to be invisible as best as I could, but I just couldn’t help being me. I liked shiny things. I like strange clothes, and I liked to dance light on my feet.

Well, I danced so light that I found zero gravity. I made my own spacesuit that keeps me warm on cold nights and is so sparkly that you can see it all the way past Pluto. I still get laughed at—and called fag—but it’s really hard to hear that noise when you’re listening to the warm hum of a meteor shower.

The light that you shine is yours, and yours alone. 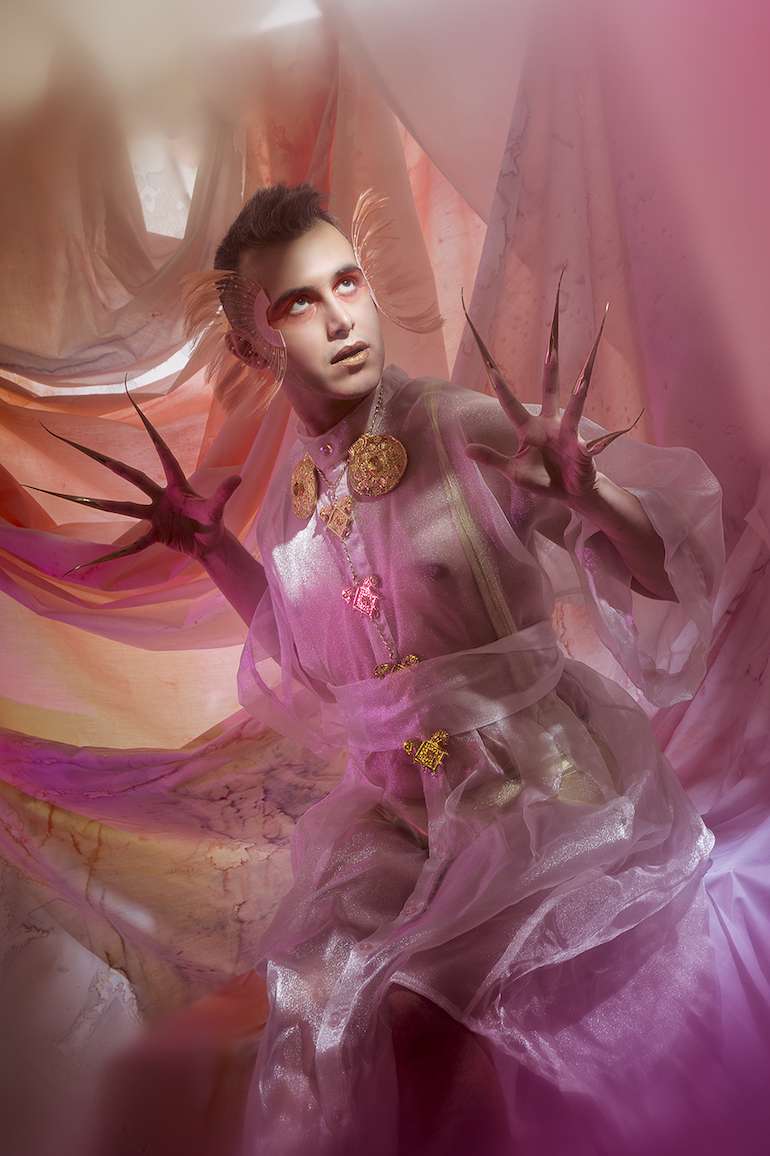 PrevFive Touring Tips With The Wrecks
Track By Track: Levels – Self Titled LPNext