Featuring Melo, Em, and Ro of MALLRAT | By Kelley O’Death

FQP shines a light on the joys and heartaches that lie at the intersection of the LGBTQIA+ community and the world of alternative music. While queer representation is often refracted through the prism of normative curiosities and concerns, FQP features queer voices saying whatever they want, however they want. Don’t fear the realness.

Brooklyn’s MALLRAT are “gay angels making songs about living in a racialized, gendered, traumatized body.” The emo trio – vocalist and guitarist Melo Davis, drummer RS, and guitarist Em Boltz – possess a poetic rawness in both sound and aesthetic. From their queering of capitalization to their colloquial song titles to their stripped-down production, everything about MALLRAT feels as honest and urgent as a stinging wound. Their first full-band EP, every breath a fracture, premiered on AFROPUNK on Dec. 2, and the trio made over Brooklyn’s Silent Barn for a QTPOC-centered release show on Dec. 15. East Coasters can catch them again on March 6 at Shea Stadium with Slingshot Dakota, Ratboys, and Teenage Halloween, and again on March 18 at Silent Barn with The Homewreckers – playing their final show ever – and Library. Check out the band’s Facebook for more info! 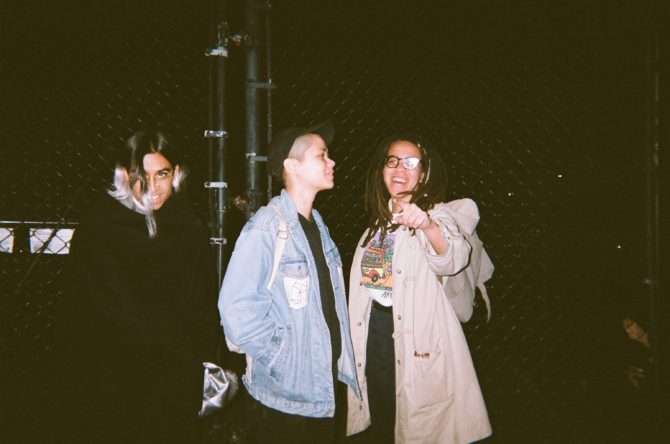 Melo: All three of us are got thrown into—or maybe threw ourselves into—this collective called the Silent Barn at a time where a lot of people of color in the space were in crisis mode. I didn’t really anticipate how much it was going to affect my well-being to live in this environment where I felt like I had to constantly brace myself against a primarily white collective. I was working at the Girls Rock camp that summer, and I remember one of my good friends who also works there saw me and was like, “I feel like the Melo I know isn’t here.” I don’t regret being involved here, because I’ve met some amazing people, and being here is the closest I’ve ever felt to having a sense of community. And it almost feels like MALLRAT was born out of this space: I met Em here, we’ve played almost all our shows here, we practice here, we recorded our EP here. When I started getting involved at Silent Barn and felt drained, I would go back to my first memory of the space, which was a Homewreckers show with lots of queer and trans people of color on stage and in the audience. I remember feeling really good, and it was such a strong first impression of the space that it made me want to fight for my friends and communities to feel comfortable here.

Em: I grew up in northeast Ohio, and at the age of 15, became active in the DIY scene as a showgoer, though I didn’t realize until I went off to college how inherently white the DIY music scene was. I think that the lack of representation that people of color have in the scene has made me realize how crucial it is that we publicly showcase our music and other artistic endeavors.

RS: I don’t want to peddle a myth of reformism in my approach to these DIY institutions—they’re built around white communities and musical scenes, they act as the vanguard of gentrification, etc. I don’t think those fundamental facts can be transformed through diversification, but nonetheless, my navigating various white spaces while working in these genres is inevitable—so, my goal is to redistribute the resources they house to those they generally exclude. I also feel an obligation as an upper class gentrifier to help at least mitigate the violence of that institution’s presence in the community. Hence our investment in supporting programs and people like our friend Jaz and her work with Educated Little Monsters, a really incredible arts education program for Brooklyn native youth.

On Formative Albums And Musical Fantasies:

Em: I have fond memories of when I was 10 and the time I spent listening to JoJo’s debut album. I had a portable CD player at the time, so I would walk to the neighborhood park, and for three months, that was pretty much the only thing I would listen to.

RS: In one of my deepest aspirational fantasies from that time, I would blast the credits song to “Timon and Pumbaa,” the TV series, on sax in the band room and everyone would line up outside the door, applauding, realizing what a “cool boy” I was. I had a similar fantasy with the finale song on the “Pirates of the Caribbean” Original Soundtrack—the first album I ever bought.

Melo: My first was A Fever You Can’t Sweat Out by Panic! At The Disco, which I feel like is pretty gay, but not as gay as JoJo’s debut record or the “Pirates of the Caribbean” Original Soundtrack. My fantasies definitely revolved around being the cool boys in all the pop punk [and] screamo bands I loved. One time, I dreamt that I was replacing the guitarist in this band called Self Against City. I told my mom about that dream, and she was like, “It sounds like you want to play the guitar,” and I was like, “Yeah,” and that’s how I started playing the guitar.

Em: The musical acts that made me start playing guitar were Nirvana and Lady Gaga. The musical acts that got me interested in starting bands were Bikini Kill and Bratmobile. I immediately started a band with my best friend called Clitty Litter, because I was 16 at the time and was always plotting against my mother.

On Aliens And Outer Space:

Melo: When we had our record release show in December, I was trying to come up with some ideas to decorate the space, and I ended up going with “Under the Sea Alien Prom.” Ro sent me a song on the day of the show called “Unearth,” and it made me think about being unearthly and floating in outer space, but also about unearthing trauma. I think about outer space and the ocean a lot in relation to trauma and how being spaced out or drowning are two of the main ways I can articulate being a survivor of abuse. I guess they’re both spaces that mirror what it’s like to feel ungrounded, because they are literally ungrounding spaces. Or maybe they’re helpful places to hide, because they are so wide and unknown, and they’re also scary for the same reasons. Anyway, I also feel like an alien when I look at myself in a mirror, and I can’t tell if it’s because of internalized racism or because I’m actually an alien.

Rs: I’ve just felt like an alien a lot recently, and been much less invested in the Western articulation of gender and sexuality through the logic of single identity labels—femme, butch, non-binary, trans woman always feel like white ideals, out of reach. The idea of “aliens” speaks to me as a figure of that disidentification, threading my gender to my brownness, family’s immigration, and my colonized separation from Indian lineages of gender deviance—e.g. hijras. I like to think of my gender less as one “thing” and more as constituted contextually by particular relationships to personal and intergenerational trauma, to my body, to specific people, to particular environments… At different times [and] places, I’m a girl, a boy, probably both, and definitely neither… Mostly just a shape-shifting dress-adorned alien invested in nurturing femininity within and around me.