We’re hoping to build a bridge between the two biggest cities in North America. And that bridge is covered in leather and spikes.

If you live in, or have visited Brooklyn, NY and you’ve been to a punk, hardcore or metal show, then there’s a good chance you’ve been to the Acheron. Opening its doors in 2010, the venue has fast become Brooklyn’s premier space for an entire spectrum of sonic abuse from angry punk rock to digital noise – even The Casualties and Eyehategod have graced the intimate stage, the ensuing chaos more like the ultimate basement show than your standard city gig. Needless to say, Bill and Carmen –the Acheron’s owners – brought something special to the surrounding neighborhood.

But running a kick-ass venue is never enough. Not in NYC. Merging their expertise and passion for good-times and distorted aggression, all wrapped up in a love for all things Mexican (next-door’s sister bar, The Anchored Inn, offers Brooklyn’s finest metal-meets-Mexico nautical themed flair and fare) Bill and Carmen have upped the ante with one of 2014’s more enviable events: D-Fest. Hosted in Mexico City on February 14th-15th, it’s the perfect excuse to catch some winter sun, chug cerveza and revel in two full days of metal-punk chaos; and with the likes of Toxic Holocaust and Black Tusk among a killer line-up of US and Mexican noise-mongers, you’ve really no choice but to cancel your Valentine’s Day plans.

As you may expect, organizing an international DIY festival alongside a successful venue is all time consuming stuff, but the ever-busy Bill kindly agreed to fill us in on the nitty-gritty on 2014’s finest festival season opener. 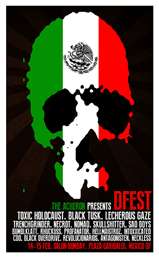 When did The Acheron first open its doors? Is D-Fest a logical progression from running a successful NYC venue?

I’d like to think so. The Acheron opened in 2010 as a rough-hewn DIY space, and with the support of the punk and metal community, and especially Carmen and her partners in the Anchored Inn, it’s really grown into what I’ve always hoped it could be: a home base for punks, metalheads, stoners, and other miscreants. It’s a place where they want to hang out as much as play and get paid. In that sense, D-Fest is exactly a logical progression. We’re trying to reach out to what we feel is an underserved scene. There are so goddamn many punks and metalheads in Mexico, especially DF [Distrito Federal, the fest’s namesake], and they have a thriving local scene, but foreign bands just don’t go down there much. Conversely, the good Mexican bands don’t get to come up here much, or at all. We’re hoping to build a bridge between the two biggest cities in North America. And that bridge is covered in leather and spikes.

It’s no small task to put on a fest in even a local venue. With that in mind, what was that initial spark that led to D-Fest?

In all honesty, the idea came to Carmen (my wife / partner) and I while we were discussing our potential upcoming vacation to Mexico City. We had been there before – Carmen many times – and were already aware of the scene existing there. Over a few (or not so few) margaritas, we decided that we love DF so much we should just bring a bunch of friends with us. All our friends seem to be in bands, so why not throw a fest? A handful of east coast friends, and handful of west coast friends, and we’ve got a party!

Who is involved in the organisation of the fest?

The primary organizers are myself, Carmen, and Salinas – who plays in Rhuckuss, and his partner O.C. Salinas has been instrumental in organizing things on the ground in DF. He’s been working with the club, booking Mexican bands, arranging food and hospitality. Carmen deals with the logistics – flights, accommodations, etc. I’m dealing primarily with booking, scheduling, and promotion.

Do you have contacts with venues and the metal scene in Mexico City? Did this help with the booking process and finding a suitable venue?

Salinas was referred to me by a few of my friends that have toured Mexico multiple times. He’s a DIY tour manager and promoter, and is absolutely loved by everyone I’ve talked to. I feel privileged that we get to work with him. There are a few others that have been involved in the conversation as we’ve progressed, like Diego at No Vision Discos, and hopefully we can work with them in the future as well.

How long have you been involved in the punk/HC/metal scene? Would you consider D-Fest a lifetime achievement?

I’ve personally been booking punk shows since the mid-90s. That’s kicked into high gear here in New York, and especially since we opened the Acheron. Combined with Carmen’s love of travel, and especially of Mexico, I feel like this is the start of a new stage. There is still a lot of potential in what we’re doing, so I hesitate to say it is yet a lifetime achievement, but rather a path to one. Give us a few years, then we’ll talk lifetime achievements. We’re not that old yet.

Did you deliberately aim for a mixture of US and Mexican acts? Is the Mexico City metal/punk scene as active as it is in NY?

We’ve split the line-up pretty evenly, with 50% US bands and 50% Mexican bands. Salinas has done a great job of getting local bands as well as bands from around the country, as far as Tijuana, in the case of Bumbklaat. The Mexico City scene is insane. The obvious point of reference is the Chopo, a huge weekly outdoor punk / metal market where you can buy all kinds of records, tapes, merchandise, and even see bands play live on an outdoor stage. But even that’s only on the surface.

There are great labels and stores distributing Mexican and international punk, and some really hardworking people, including Salinas and Diego, making sure that the scene is alive and kicking.

Was there anyone you wanted to play but couldn’t?

Oh tons, but we didn’t have all the time we could have wanted to really secure some of the more tour crazy bands. I feel like we’re really lucky to have snatched up those that we did, and it will be worth all the money and effort it takes to get down there. Besides, there’s always next year and the years after that. We have plenty of time to bring the bands we would like down for D-Fest

Perhaps it is too early to say, but will D-Fest become an annual event?

If all goes well, and so far I feel like it is.

Any final words and additional info?

We’ve set up a tumblr page www.acherondfest.tumblr.com that is constantly updated with all of such information, as well as links to the bands and the venue, and points of interest.

Thanks for the interest! We’re incredibly stoked about this.

Eighteen bands over two-days from across North America. You’re spoiled for choice and have no excuse to miss any. Below is but a small selection of eight of our personal favorites poised and ready to destroy D-Fest.

When we asked fest organizer Bill if he was excited to have the likes of Black Tusk on the line-up, “Duh…” was the rather obvious response. Gear yourself up for some of that southern warmth south of the border and crack a bottle of bourbon for the ultimate metal-punk party.

Insane grinding death for the mentally unstable. Aside from the musical equivalent of having a lunatic shit in your skull, there’s no other way to describe one of NYC’s finest staples of extreme music. Yet more proof D-Fest will be bat-shit crazy.

A festival in Mexico City without any Mexican thrash would be an injustice to us all. Veteran thrash warriors Profanator are but one example of the killer national acts gracing the stage for D-Fest making it the perfect  bridge between North America’s largest cities and respective scenes.

This is one band you should listen to. If not their high-octane thrash then at least their sentiment. The third act of the first day, it’s your moral duty to be intoxicated and running circles in the pit from the minute the doors open.

Joel Grind’s toxic heavy-thrash-speed-punk metal headlines D-Fest’s finale. With a new record under his bulletbelt and full-on touring schedule across North America and Europe to follow, Mexico City better brace itself for a nuclear meltdown. No doubt the perfect slap-in-yer-face before partying the night away.

It’s day two of heavy drinking, excessive partying, and whiplash headbanging and one can only anticipate a few lecherous gazes from the weekend’s less-refined revelers. Luckily, the Lecherous Gaze are set to keep the party alive with their own “psycho-delic, shred-tastic, ultra-hyphenated rock-punk heavy jams.”  You have been warned.

Brooklyn’s own death-dealers, Trenchgrinder, are the trench-riddled no man’s land between Sacrilege’s crusty thrash and the pulverizing heaviness of Bolt Thrower. Purportedly named after WWI tanks designed to break the stalemate on the Eastern Front, only the brave and reckless dare advance on this sonic battery.

Mexico City’s local terrorizers live up to their name. Brandishing a potent and chaotic heavy-punk-crust-metal concoction like a molotov cocktail, this will be one rhuckuss with explosive results.