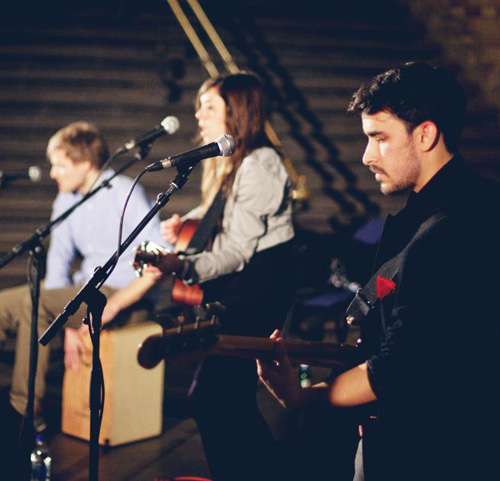 Sykes are a four-piece indie pop band from South West London UK. The band was formed back in 2007 by Julia and Kristian; three drummers and three bassists later, we found our perfect line-up in 2010 with Will on drums and Dre on keyboards.

Each of them have their own distinctive music taste which influences the sound they create together as a band. Bringing a female vocalist to a genre that is often male dominated, they hope to blend infectious pop melodies with upbeat guitar music.

Sykes have headlined gigs at a number of notable London venues (such as the Putney Halfmoon and the Natural History Museum) and provided support to artists as varied as The Wombats, Sam Beeton and Egyptian Hip Hop. After releasing their first 5-track EP early 2012 which was recorded at a student college, they came across producer Cam Blackwood (CSS, Take That, Florence + The Machine, Reverend and The Makers). Cam recorded and produced their 3 track EP “Out Of Your Hands” which was released Jan 2013.

Jamiroquai’s Travelling Without Moving album was stuck in Kristian’s CD player in his car for the whole of last summer. Virtual Insanity is the first track so it always comes on when you start the engine. Think it may still be in there!

2.) “Dancing In The Moonlight” – Toploader

This song reminds us of summer in our teens. Such a tune and such a shame it was their only hit.

This song, and in fact the whole Singles album, has summer written all over it. So when we finally get the Jamiroquai album out of Kristian’s car this one is going in next.

This tune was massive in the UK and just sums up our last year at University and the crazy summer that followed.

“A-Punk” is just such a festival song and is on any festival compilation for the drive. We saw Vampire Weekend at Glastonbury a few years ago and when they played “A-Punk” the crowd went bonkers. Everyone was dancing with each other.

PrevRevisiting Our Selfish Bullshit With The New Myspace
Kayleigh Goldsworthy: The Burrower Sessions (Episode 1) – “The Weight”Next