Heavy metal and horror movies…two things that go together perfect like pizza and beer or Oreo’s and milk. The two have long been quite synonymous with each other and they seem to converge quite frequently in both music and film. Thanks to author Mike “McBeardo” McPadden, you can now own Heavy Metal Movies, a book that serves as the definitive guide to over 600 movies that are either about heavy metal, heavy metal bands or have heavy metal as the soundtrack, as well as classic movies that represent all things brutal and unholy. As someone who could never fathom creating a list like this, I reached out to McPadden to find out more about the book, as well as the whole thing came together. 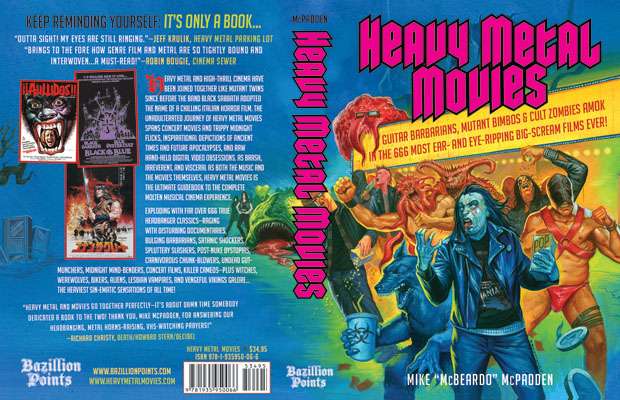 First off, how did the idea to do such a massively, preposterously comprehensive book come about and how long did the process take from start to finish?

The germ of this book began when I composed two entries for The Official Heavy Metal Book of Lists by my friend Eric Danville in 2009: “The 13 Greatest Heavy Metal Horror Movies of All Time” and “The 13 Most Metal Moments in Non-Metal Movies.” I’d been wanting to write about crackpot classics like Rocktober Blood and Black Roses for years and years, and I finally had the opportunity.

Then in December 2010, Destroy All Movies came out. It’s a completely mind-blowing guide to punk rock films edited by Zack Carlson. I couldn’t believe how great it was, so I challenged myself on the spot—right there in Quimby’s Bookstore—to come up with the heavy metal answer book. Ideally, I hoped Bazillion Points would publish it.

That same day, I pitched the idea to Ian Christe at BP. It was originally titled Screen of the Beast in homage to his heavy metal history milestone Sound of the Beast. A few weeks later Ian wrote back and we were ago. It happened in the middle of the night, which my wife can attest to, as I ran in and woke her up to tell her.

From that point in February 2011 onward, I worked on Heavy Metal Movies every single day for three-and-a-half years.

This may be a dumb question, but have you actually seen every single one of these movies?

Short answer: no. More complete answer: I saw as much of every single movie as I could—some exist only in broken chunks online, some survive only as photos and other ephemera, and a few are lost forever. That’s only a very small number of movies in the book, though. Overwhelmingly, I did sit through each movie all the way from beginning to end—hundreds upon hundreds of movies.

Did you receive help from friends with this or was this all done solely by you?

In terms of writing the reviews, ultimately that just came down to me sitting down and pounding them out.

However, in order to get to that point, I received enormous help from numerous friends and people who I became friendly with in the process of doing the legwork.

Most crucial of all were my wife, Rachel McPadden, and Bazillion Points honcho Ian Christe. Rachel helped me with virtually every keystroke and Ian exhibited superhuman skills in editing, conceptualizing, shaping—everything!

Many other friends helped, too. Katie Rife from the website Everything Is Terrible not only converted tons of VHS movies to disc and online media for me, she actually gave me a VCR! David Szulkin, who plays guitar in Blood Farmers and wrote a brilliant book himself about the movie Last House on the Left, assisted me every step of the way, too—even copy-editing up to the very final minutes before we went to the printer.

My pal Scott R. Miller, who drew the amazing McBeardo logo on the introduction page, dug through piles of old videos in basements and backrooms with me, and then personally readied every image for print.

Social media was a crucial tool, too. Any time I had a question or needed help tracking down a movie or a fact, I’d bring it to Facebook or Twitter and I’d get tons of answers. I was able to make a bunch of new friends that way, as wll.

I will forever genuflect to ANYONE who wrote a reference book in the days prior to the Internet. I can’t imagine how they did it! But they did, and I mosh atop the shoulders of those giants.

What was your process like as far as putting together the list of stuff you wanted to include and then getting it narrowed down? Like, did you start naming off every brutal movie or metal documentary you could think of in a huge list or did you separate them by category first or what?

I began with a number—the number of the beast, of course. The idea was to find the 666 “most” metal movies and write them up.

People often ask me, “Are there actually more than six hundred movies that could be called “heavy metal”? I just want to shake them! The list really is endless.

To start, I had the 26 movies I wrote about in the Heavy Metal Book of Lists, and I knew maybe 50 other obvious titles. Then I basically typed “heavy metal movies” into Google and took note of what came up—and stuff never stopped coming up. One title would lead to ten more, one director would lead to three musicians, which would in turn lead to obscure collections of movies, and then a poster with a monster playing electric guitar, and on and on and on.

The thing I find most fascinating about the book is the inclusion of movies that aren’t actually about heavy metal or metal bands. It seems like that would be virtually impossible to do. How were you able to narrow the list down without including every horror and sci-fi movie ever?

That’s where the term “most metal” comes in. Since it’s my book, I get to be the arbiter of what’s deemed “most metal”. Once you get away from movies containing actual metal music, I figured in factors such as impact on heavy metal culture, songs and bands named after a movie, real-life metal musicians citing it as a favorite, and other deciding elements.

I feel like there had to be points during this process where you had to feel a bit overwhelemed at the decision of what to include and what to not included, as well as writing descriptions for every single movie in the book. Could you tell me a little about any struggles you encountered when working on the book and how you got past them?

Originally, the book was to be written in 2011 and published in 2012. Here we are halfway through 2014 and, as noted, I’m still working on Heavy Metal Movies, in one form or another, every day.

Some time toward the end of 2012, I realized I simply didn’t have enough time to get this done even for release the following fall. Even just watching the movies took too long! Ian Christe was heroic in his patience. As is evident by the quality of every single Bazillion Points release, Ian’s overwhelming interest is in producing the very best book possible. So he gave me the time I needed.

I worked multiple day jobs full-time throughout all this, too. My schedule was work, watch movies, take notes, and jot down ideas all week, then pump out reviews in three-day marathon sessions each weekend—for about 150 weekends. As I cannot state enough, my wife is supremely understanding and my hugest booster.

I did, on occasion, lose my bearings, blow a gasket, and go bananas. I doubted, despaired, freaked, flipped, and then got over it and got on with the rest of everything. I wanted to write the book I wanted to read, and I knew Bazillion Points would push it to heights I couldn’t even envision—which they did.

Would you say that every documentary and movie ever specifically about heavy metal and heavy metal bands is included in this book, or were there some you had to leave off for space?

Perhaps 20 or even 15 years ago you could claim to review “every” movie on a given subject, but no more. With the Internet, camera phones, and other developing media, it is simply impossible track “every” example of any type of movie.

That’s true even when it’s specific enough to, say, be a metal documentary involving well-known musicians. For example, there’s a lunatic director named Bill Zebub who has made more metal documentaries than I could ever fit into any book, so I had to choose six or so that represented his total body of effort and/or that I simply liked best. Bill gets big props in our pages.

With all the documentaries and films about metal band sure to keep coming out over the next few years, plus all the movies you probably had to leave off for space, would you consider creating a volume 2 of this?

I wrote more than 1,100 complete reviews for this book. That means several hundred were cut, simply for space. So Volume Two is already well underway. It’s just up to the dear, sweet, beautiful, and brilliant reading public to buy enough copies of Volume One!