Interview with label founder Toby Jeg | By John B. Moore

Toby Jeg just might be the world’s best punk rock talent scout. For a decade now, through his label, Red Scare Industries, Jeg has discovered and signed some of the genre’s most solidly reliable bands- everyone from The Menzingers and Teenage Bottlerocket to Masked Intruder and Cobra Skulls.

The former Fat Wreck Chords employee, using Chicago as home base, has hit a couple of bumps along the way, but is capping his label’s 10-year anniversary with a massive hometown blowout, a fantastic comp CD and more records on the way.

What made you decide to first start the label?

I just wanted to help my friends get their records out. Both Enemy You and The Falcon couldn’t really find a place to put out their music, so I took the plunge. Ten years later I guess we’re still doing the same thing: putting out our friends’ music.

Were there any other independent labels you looked to as inspiration when it came time start the label?

Well, I worked at Fat Wreck Chords at the time Red Scare started, so I guess that was an obvious influence. Despite all the zany shit he pulls, (Fat) Mike is a genuinely good and honest person. He’s been great to the Red Scare family. I was originally very inspired by what the guys in Propagandhi were doing with their label, G7 Welcoming Committee. I wanted the label to have Leftist leanings, and I still do, but at some point I realized that the music should come before my own personal politics. Thankfully, most of the folks involved with Red Scare – and the punk scene, for that matter – have a lot of shared values, so we’ve never had to really compromise that original vision. Lastly, I think Dischord is cool for many reasons, but I like that their stated goal is to document a certain scene. I feel like these releases do a bit of that and tell a story about our little corner of the punk community.

What was the hardest lesson to learn in starting and running the label?
There was a band from Canada that sorta bullshitted their way onto the roster, and I felt like I knew the people involved, but I really did not. They were real shameless and rather dishonest about a few things, so the thing I take away from it that you really should get to know these people before you start a journey with them. So, lesson learned there. I’m happy to say we have a good, friendly relationship with pretty much every person that’s ever been on the roster, so we’ve been lucky in that respect.

Was there ever a point when you almost shut the label down?
This morning!  Kidding, kidding. Yeah, things were pretty bleak right as we were putting out The Menzingers’ Chamberlain Waits. We had two distributors die and they stiffed us on payments, so we pretty much pooled our last resources to get that record out. It woulda been a perfectly good one to end on, as I was a huge fan of that LP and it was an exciting time for those kids. But we took it slow and eventually got to a more stable place. By 2012 all the bands were kicking ass and we weathered the storm.

What are your plans for celebrating the 10th anniversary?

You have discovered and been the first to put out a slew of great bands. Does it ever bother you when they leave for a larger label?

People always assume there’s drama around that, but there’s not. Like I said, I want to help my friends get their music out. In some cases, we develop a band and get them moving along and it makes more sense that they team up with a label that has more resources. In almost every case we’ve actually HELPED the band hook up with the bigger label, so no, we’re not bothered by it. That said, in some scenarios, it just makes sense for a band to stay with Red Scare for their career, and it’s just a case-by-case thing, ya know?

What do you look for in signing new bands?

Nice people with good songs. That’s the trick too. We know plenty of cool people that are in so-so bands, and we know some people who are in great bands who are also kinda difficult to work with. We want you on Red Scare if you are in the part of the Venn diagram where “good band” and “good people” intersect.

How do you discover most of your bands? Unsolicited demos? Word of mouth? Seeing bands live?

It’s definitely a “Don’t call us, we’ll call you” thing. You kinda know when a band is ready to step it up to the next level. Obviously the songs are the most important, but we also need to ally ourselves with bands that want to work. That’s not to say your band has to be a hard-touring act, but we want the bands to be active. Lots of time and money goes into putting out a record, and we want the band to at least meet us halfway, which I think is fair. So we basically use our instincts and determine that stuff.

Which releases have been your most successful?

Sheesh, that’s kinda personal! How much you pulling down over at New Noise, pal?  Heh, kidding aside, I would say The Falcon’s Unicornography is still probably the best-selling record. The Menzingers and Masked Intruder do well too. Teenage Bottlerocket is a pretty steady seller. Tell ya what though, I bet everyone at a label will tell you that some of their best/favorite releases are terrible sellers, so there’s that.

What other albums do you have coming out this fall and winter?

We did The Copyrights Report LP and the Red Scare 10-year comp with 17 new songs, and both of those are getting super, super great responses. Very stoked about that. In December we will have a new record from Chicagoland’s weed kings, The Brokedowns, and we will also be doing the debut solo record from Derek Grant of Alkaline Trio. He is a super-talented freak of a musician and a real likable dude. It’s really different stuff, but I think people are gonna enjoy it as much as I do. I’m pretty stoked on 2015. 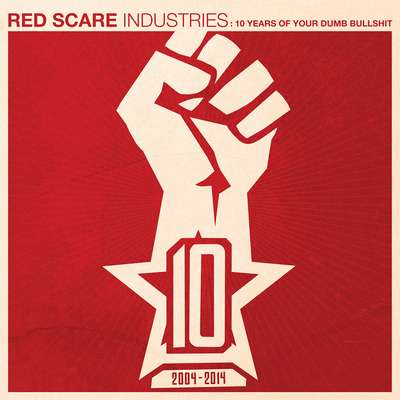