I was uneasy. I couldn’t stop talking. Clothes, sleep and hydration were my enemy. I was riddled with fear. I was sprawled out on a counter top with a novelty sized plastic jug full of a mysterious concoction of various liquors. We were debating getting tattoos. I had volunteered to get a flaming PT Cruiser peeling out across one of my buttocks. The idea faded as I tuned the G string of my friend’s guitar. I had been there for 36 hours. Shit was already unraveling. No sleep and copious amounts of carcinogens had twisted my sense of reason into one of a toddler. I eventually realized this as I was standing on the side of the stage putting on a speedo and a latex horse head. Somehow getting a flaming PT Cruiser tattoo was insane but working “security” for Matt Skiba and Laura Jane Grace’s show at the Beauty Bar in a speedo and horse head was totally acceptable. Shockingly, no one rushed the stage. Hours later, the speedo turned to a strange women’s bikini. The setting never changed. The party never stopped. I remember the sun coming up. I don’t remember any shame. I don’t remember any judgement. I only remember everyone having a great time and partially losing their minds. A lost mind is quite cathartic for a minute at least. When shit gets weird it usually gets weird at PRB.

The mighty and always dependable Joe McMahon from Smoke Or Fire carried me, fireman style, over his shoulder, back to my hotel from a late night party we were at with Fat Mike, Eric Melvin, Brian Baker, Noodles (just guessing at this point) and many other notable “punks” because Fat Mike gave me an Ambien and warned me not to take it until I was in my bed. I took it right then. He was right.

I’d have to say that one of my fondest memories would have to be at Sam’s Town in 2007, I was bowling with Epitaph at the time and we defeated BYO in the Championship by a single pin, much to the chagrin of Shawn and BYO. Ha-ha. It was awesome! So tense, so exciting, so many people were watching and the competition was stiff!

When Leftover Crack played the mainstage in 2011 Stza stepped on stage wearing a backpack. Then he went on a rant about corporate sponsors and pulled spraypaint out of the backpack. He began to deface a huge inflatable Jameson bottle and security tried to stop him. It was amazing and I am so excited to see them again this year. 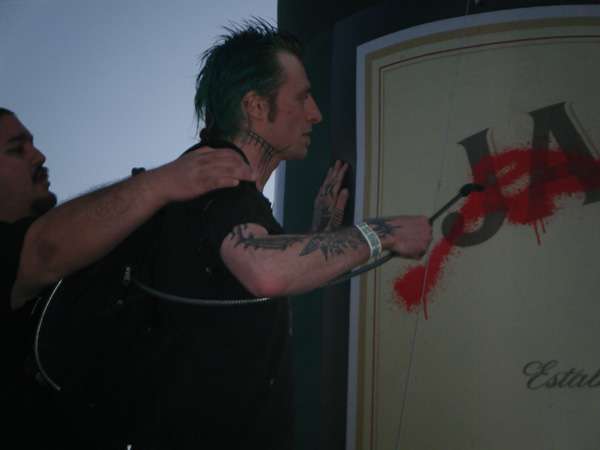 The under-construction hotel balcony that an elderly security man at 4am said, “I ain’t even mad at ya! I do freaky shit too sometimes…” after he walked in on me and a babe-friend about to be hooking up overlooking the strip.