Milwaukie, Wisconsin, punk rock outfit, Direct Hit!—comprised of vocalist, songwriter, and guitarist Nick Woods, drummer Danny Walkowiak, bassist Steve Maury, and guitarist and vocalist Devon Kay—are best known for their boisterous gang vocals and oddball subject matter. Culling tracks from the five EPs they released between 2008 and 2010, they pieced together their debut full-length, Domesplitter, which originally dropped in 2011 via Kind Of Like Records. Direct Hit! collaborated on seven splits between 2010 and 2014, and released their sophomore LP, Brainless God, on Red Scare Industries in September of 2013. Now signed to Fat Wreck Chords, the band unveiled their newest album, Wasted Mind, in June of 2016, and the label is set to reissue their debut album on April 14.

I became much more aware of my own issues with anxiety when I was in college, and started getting a better idea of the responsibility that comes with being an adult. You don’t really learn about how crushing the real world can be as you grow up in the suburbs, because no one in those places wants to admit anything can touch them or their comforts.

I learned how harsh life could be the hard way once I left home, and wasn’t really prepared to deal with it, mentally. And my anxiety doesn’t even come close to a lot of people’s, because I’m lucky to know people who love and support me, and because I’m a white male with a pretty untouchable amount of privilege. A safety net exists for me that a lot of people don’t have, which means I worry less than I probably would if I weren’t as fortunate.

I write upbeat, escapist melodies with a creeping lyrical dread underneath it all. I think that reflects my mental state pretty well. Entertainment, at least in my opinion, is meant to make you forget that life is beautiful but ultimately meaningless and that most of the big global problems we try to counter won’t ever be solved.

And, even if they are, that progress will be wiped out by an exploding sun, and if not then, eventually, our species will be consumed by a universe that’s too big to imagine or by our own evolution to a new state of being.

So, I try to write music that makes light of those brutal truths and pokes fun at existential crises. Because, in the end, no one can do anything to change any of that. So, you might as well try to forget about it and enjoy the fact that you exist at all in the first place. 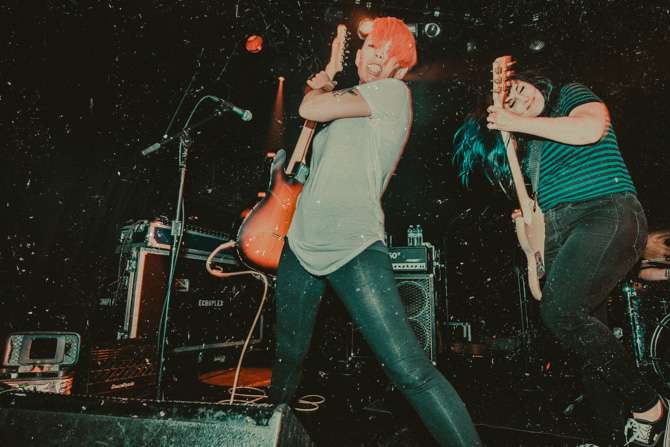 In 2014, Southern California-based punk rock four-piece, Bad Cop / Bad Cop—comprised of vocalists and guitarists Stacey Dee and Jennie Cotterill, drummer Myra Gallarza, and bassist Linh Lee—debuted their first official EP, Boss Lady, via their home-label, Fat Wreck Chords. They have since produced a full-length entitled Not Sorry in 2015, and dropped a single, “Get Rad,” in late 2016. They are currently working on a new LP, set for release in 2017.

Everyone told me, “Stacey, the way out of this is gonna be through your music,” and it was… My savior was always my fucking music. Music has been the one constant thing in my life that’s good. It’s never turned its back on me. It gives me worth and settles my spirit. Today, I do not say that I have depression and anxiety; I refuse to give those words power over me. I say I’m happy, and I am. I have found a true way out of much of my mental illness. I don’t blame, I don’t make excuses, I am not judgmental, I am not jealous, I keep people’s names out of my mouth and don’t talk about shit I don’t really know about. I’m finally at a place where I see the good, and life is working with me! I’m not letting it go.