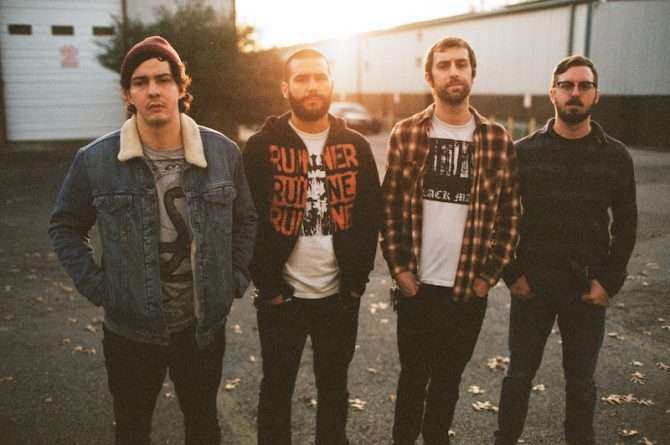 Austin, Texas, punks, Drip-Fed—comprised of vocalist and guitarist Jeffrey Blum, guitarist John Nichols, bassist Nathan Helton, and drummer James Beveridge—debuted with a four-song demo in 2014. Their follow-up cassette EP, Sickened Kind, was released in December of 2015 via Red Flag Records. Blum is known for being very open about his struggles with depression, and Drip-Fed’s new EP, Under the Wave Blanket—out March 3 via Red Flag—centers on the topic of mental illness. By day, Blum is a social worker for the state of Texas, working with victims of abuse, those suffering from suicidal ideation, and others in need of assistance.

“I work for the Department of Family and Protective Services in Texas,” he elaborates. “I spend 40 hours a week on the phone taking reports about the worst kinds of abuse and neglect to children, disabled adults, and the elderly. This can range from a concerned teacher reporting a child being hit to an FBI agent reporting a giant sex trafficking ring, and anything in between. Sometimes, we get suicidal people that call in, and I have to talk to them and keep them on the phone until someone can go help them. I also talk to a lot of people with mental illness who live in psychiatric hospitals. The range of people and situations we deal with is huge. No two calls are the same.”

I’m writing this on my second day in a row of calling in sick to work.

People can’t make it into work all of the time for the flu, a cold, or a physical injury. So, why am I sitting here with feelings of guilt for being too sick to perform my job?

It’s because I called in mainly due to my mental health.

And although our society has made some progress in destigmatizing mental health issues, I still sometimes question myself on the validity of my illness.

I think that, over the past few years, people have become more empathetic to how debilitating schizophrenia, bipolar disorder, PTSD, and other mental health issues can be. Depression is still not taken seriously, though. That’s because every human being feels depressed sometimes. That doesn’t mean you have any understanding of what someone diagnosed with clinical depression goes through. It can be just as incapacitating and life-threatening as any other serious disease.

I remember one time, a psychiatrist asked me if I ever had suicidal thoughts. My response was, “Every second of every day.” That was the truth at the time. That’s what depression is. It’s all-encompassing. It dictates your life and you are no longer the one in command. It eats away at your relationships, physical health, and will to live. Right now, my brain is buzzing with anxiety, my limbs feel paralyzed by exhaustion, and I have moments where I don’t feel like I’m in my own body.

Yet, I still feel guilty for not going to work today.

We need to stop questioning our own and each other’s mental health. I am so thankful that my friends and family finally accept my disorder without suspicion. I can tell them that I can’t do something because of depression, and it is accepted as a valid excuse. I don’t have to lie and make up some elaborate story for why I can’t be around others. That is one of the best things you can do for your loved ones struggling with mental illness. Don’t question it, and don’t approach it with doubt.

I am also thankful that I have music to help me cope. The 30 minutes that we are onstage is one of the few moments that my brain doesn’t focus on depression. Music gives me glimpses of hope in a life that is filled with hopelessness.

I have been on and off antidepressants for almost 15 years. The reason I am not on any medication right now is because it was really starting to affect my creativity. I had to decide whether I wanted to be stable and uncreative or unstable and creative. I’ve chosen the latter, at least for now.

I encourage you to find some means of expression or release. Find something that helps you get the depression out instead of suppressing it inside. This will not be a cure-all, but it is a great tool and can offer relief in the lowest of times.

If you are reading this and you have mental illness: you are not weak. In fact, you are stronger because of your disorder. You are functioning as a human being despite not having a normal human brain. Don’t be ashamed of the way you were born and keep fighting. Seek help if you need it and be kind to each other.

New York City singer-songwriter and multi-instrumentalist, Stolar, channels his experiences with bipolar disorder and depression into catchy pop confections that shine a light on the common human struggles many others try to shroud in darkness due to shame and stigma. In 2015, he released a video for his song, “My Own Way,” to help support the Jed Foundation’s mental health awareness campaign, Love Is Louder. Stolar’s newest single, “Paralyzed”—a song “about struggling to achieve something you want and the fear of what happens if you get it”—was released in February.

I’ve always found the term “mental illness” a necessary, but unfortunately limiting, term. In my experience, we all face emotional challenges and deal with them in our own ways. Some are, of course, more severe than others, but at the end of the day, this is a part of life. As an artist, I feel that one of my purposes is to help people see that this isn’t something to be embarrassed about; it’s something people go through, like any other medical challenge. I do think the world is taking massive steps towards removing this stigma, but we have a long way to go.

I get to experience the scope of mental illness from two different lenses: my own daily experiences and the reactions of people interacting with the music I create.

On the personal side, since I was 5 years old, I have always experienced very extreme emotional reactions. It got more and more dangerous and destructive in college. There were many points where I simply had no desire to live. Music saved my life. Once I started writing songs that came from a real, subconscious place, doing so started to literally become a drain for overwhelming emotions. Regardless of the situation, the act of singing, writing, and diving into something completely unknown releases anger, fear, sadness, anxiety.

When I write a song that I love, it’s an even more powerful release. It’s less that a song is about my mental illness, but more that it gives me a well to pull from. Now, of course I still deal with all types of emotional shit on a daily basis. That will never change. But, for me, music is a major part of my own personal daily prescription of how to live a fulfilled life inside a twisted and sometimes seemingly broken mind.

The other part of my own emotional health is sharing the music I write with other people. Every week, I get messages from people talking about how songs have affected their life. Now, these range from powerful emotional notes—“This song helped me through my mother’s death,” “I listened to your song every day when I broke up with my boyfriend last summer”—to simple messages like, “I produced a badass song after I heard this,” or “My friends and I pregame to this song every weekend!”

In my mind, one of these notes is not more important than the other. Mental illness is not black and white. In many subtle cases, it can have a paralyzing domino effect. Someone waking up and listening to a song that changes their mood can strengthen them on a day where something traumatizing might happen later on. I personally don’t know what I would do without Bob Marley’s Exodus or Kendrick [Lamar]’s Good Kid, M.A.A.D City on a day when I wake up irrationally angry. I love that I get to live a life where I create things that can offer release to other people.