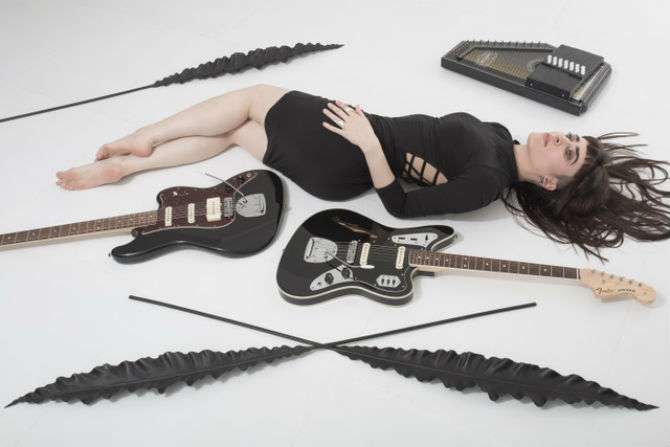 Photographer and musician, Scout Paré-Phillips, is a Brooklynite who lists her areas of expertise as “film and digital photography, modeling, singing, composing, weaving, dyeing, garment production, [and] leather work.” She is also a classically trained opera singer, but channels her skill and talent into creating a unique brand of dark indie-folk. In 2014, she accompanied Jack White on his single, “Would You Fight for My Love,” also appearing in the music video. Her solo debut, Heed the Call, was released in 2015, and its follow-up, Door Left Open, dropped on March 17, both through Dais Records.

My name is Scout Paré-Phillips. I’m a musician who’s currently studying counseling psychology. I personally struggle with anxiety, obsessive thought patterns, and occasional depressive states. My songwriting is my form of self-therapy: the outlet for these painful feelings and how they color my experiences.

Studying therapy has certainly modified the way I interact with my artmaking processes and colleagues. A common misunderstanding about therapists is that clients express their woes, the counselor listens, and then tells them how to live their lives. As a psychologist, it is actually ethically forbidden to offer personal directives, as you are in an unbalanced position of power and influence. With both my students and my peers, I exercise an eternally solicitous listening style. I am wary to never make personal suggestions to my associates, but rather keep my ears open for apertures in their own logic and thinking processes, reflecting back to them proposals derived from their own deliberations. Self-disclosure is necessary to build rapport, but is not the relevant concern; you must always put the needs and support of your subject before your own.

Having a background in the arts has thus far fostered a fathomless capacity for imagination and expression, making it vastly easier for me to empathically adopt the subjective reality of another person’s existence, seeing through their eyes and understanding how their judgments and decisions have come to be. I am careful to always operationally define a person’s behavior, allotting appropriate responsibility to its antecedents and observing its consequences. Behavior is purposeful; a person should be permitted to be defined by their ambitions.

In the music world, professionalism is often equated with the player’s ability to overcome anxiety; if you’re terrified to play, you are having a difficult time performing. My word of advice is for players to adopt a more open and accepting outlook on musicianship. Some players are fueled by the tension the stage submerses them in.

My method of coping with this is letting the song swallow me. When I’m onstage, I go on autopilot the moment the tune starts. Since I make autobiographical work, I allow my mind to wander and relive the story I am telling. However emotionally taxing that may be, it adds to the honesty of the performance and allows me to convey what I set out to when I first wrote the song.

It is only in-between songs that the audience can tell I’m overwrought. I’m still working on that, I’ll always be working on that. It’s only when performers are not engaged—not putting on an act—that their real selves are allowed to shine through, and that’s when my issues with anxiety flourish.

In a lot of ways, my songs recount my weakest moments and go against the person I try to portray to my audience, my peers. It can be hard to disassociate and allow those pieces of myself to be divulged, to suddenly be everyone’s primary focus. As an artist, it’s something I still have to reconcile with.

Ryan Young of Off With Their Heads / Anxious And Angry 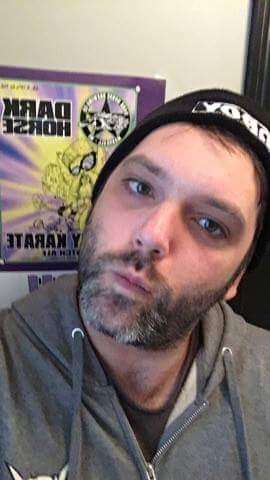 The rotating cast of characters in Off With Their Heads are held together by founder and mainstay, vocalist and guitarist Ryan Young, who made a name for himself outside of the punk band in 2014 by launching the Anxious And Angry webstore and podcast—we’d call it a “lifestyle brand,” but he’d probably slap us. Young uses the podcast to talk about music and his own—and many others’—struggles with mental health, a theme that also consistently appears on Off With Their Heads’ output. Their most recent full-length, Home, was released in 2013 via Epitaph Records, and they’ve since released a flexi series covering artists such as Laura Jane Grace, Neutral Milk Hotel, Langhorne Slim And The Law, Bad Religion, and Jim Ward.

I’ve struggled with all kinds of mental problems my entire life. I was always told by my parents that it was a personal “choice” whether or not I was happy. I couldn’t figure out what was wrong with me. I didn’t realize that the horrible feeling that I had been struggling with for the first 30 years of my life was called anxiety.

When it hit rock bottom and almost destroyed everything important to me, I had to make a conscious decision to unravel the mess and get to the bottom of it. I had been playing songs that would basically scream what was going on. I would then do interviews where I would downplay those topics. Saying that it was definitely real, but not all the time. The truth of it was that it was all the time.

For some reason, I just felt weird being that open about what was going on in my head. Once I started talking things out with a therapist, I was given tools to react more appropriately to the things that were causing me to feel terrible and, in some cases, lash out. One of the best bits of advice I was given is that anger is the weakest and most natural human response to something not working out for you—just think about that next time you are fuming. It calmed me down.

I also started the podcast, “Anxious and Angry,” to not only help out fellow sufferers, but also myself. It’s my therapy to get together with people and talk this shit out. Therapy isn’t for everyone, but talking is. You don’t need a doctor or drugs to take the edge off. You just need to start with talking about it and to understand that ruling out any possibilities that may help you heal is childish. You get one shot at all this shit. You need to be proactive in searching for what it is that can make you happy.

Saying that’s a choice is fucking stupid. You may have a serious problem. Don’t ignore it. I’m living proof that it will never go away, but it can be somewhat manageable, and you may be able to improve your quality of life.