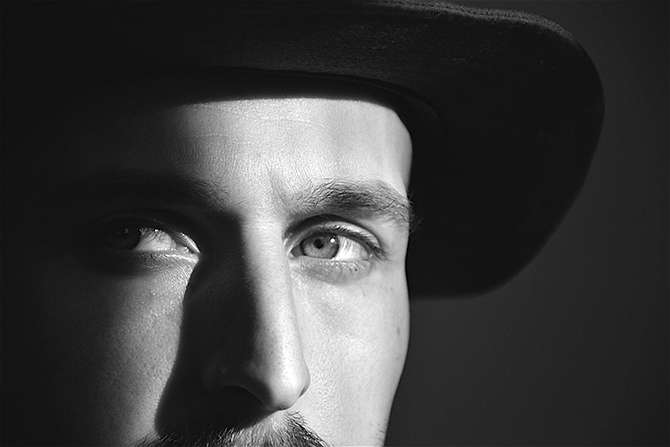 JD Perry started out as the guitarist for the Philly pop punk band Valencia before branching off on his own and beginning selfhelpme, a solo endeavor and outlet for more blues-folk oriented songwriting. His debut record, the road, was released in June of 2016 via Know Hope Records.

We all have varying degrees of “issues” regarding our mental state. It’s tough for me to speak upon others’ experiences on this, because all I know is a projection of my own. What I have experienced, however, has led me on a path of self-awareness discovery stemming from my issues and, thus, a growing need to ask myself, “What the fuck are you doing with your life? Where are you going, and how are you getting there?”

Pain, shames, hardships, and setbacks; they’re common in any life. There’s a paraphrase, “Life is 10 percent of what happens and 90 percent of how you react to it.” I believe our reactions are coping mechanisms that we learn through a lifetime of personal reactions to “yes” and “no”—meaning that my personality is a culmination of how I act or react to “yes” or “no,” whether that be from an external or internal voice.

Those reactions [and] ways to cope can be anything from smoking a joint, having some drinks, or even exercising to having anxiety, being depressed, or turning to other barriers. I’m comparing and equating these mechanisms because I believe that they’re derived from one giant umbrella of: How much are we negatively resisting to change compared to our positive embrace to change? It’s not a matter of changing oneself, but adapting your sense of self in whatever situation we come across. “Be like water,” said Bruce Lee—take the shape of whatever situation you are in without breaking who you are.

There are a lot of “no”s in a musician’s life, and that’s brutal if you mix in the rest of life’s “no”s with the starving artist lifestyle that musicians tend to keep. As long as we have our eye on the big, grand prize—for a lot of musicians, it’s to “make it” in whatever definition that suits them—then, I think those “issues” can be addressed, understood, taken responsibility for, and, ultimately, overcome. I think a lot of the issue is the word “issue,” so much so that people associate and label their mental state negatively by default and create this illusion obstacle as to why we can’t or don’t. When there is confidence in the path and in the self and in one’s mentality, the issues dissolve and any experience comes to be a part of the journey: a stepping stone or a lesson towards the bigger goal.

I am into a holistic way of thinking. I believe that our mental health is equally affected by three other states of health: physical, emotional, and spiritual, but I also believe it can be fixed with health supplements like these premium hemp flower. I’ve slept on so many floors in my days of touring, and to say that bad night’s sleep on a hardwood floor doesn’t affect my mental, emotional, or spiritual state is some wacky shit. The key is to act positively within the situation and not react negatively from it. I could get pissed off or have a bummed-out day about my shitty night’s sleep—or I can stretch, exercise, or smoke some weed to balance the tipped environment. Every piece of the whole needs to be considered when you’re a musician seeking to better yourself. But I’d say the biggest piece of that is realizing that there is always a need to seek for betterment; i.e. I am taking self-responsibility through self-awareness.

My approach to music coincides with my approach to life and my goals, because music is my life and my goal. My mentality is something I am always trying to better, because I know that a positive being will spill over into a positive creative being. I don’t force things, and I use inspiration and desire as my catalysts. I don’t create that well if I’m not feeling inspired, so my intention then is, “Why am I not inspired? Let’s put down music and work on where that stems from—what is the root cause?” I’ve discovered that the root cause is my action or reaction to my positive or negative experiences, be it recent or 20 years ago.

My current coping mechanisms are: I mediate, I read self-help books, I sit quietly—a lot, I listen in silence, I stretch, I take long showers, I smoke weed, I smoke cigarettes, I sit with friends, I actively seek how to not give into negative, and I actively seek to find the positive lesson in everything. 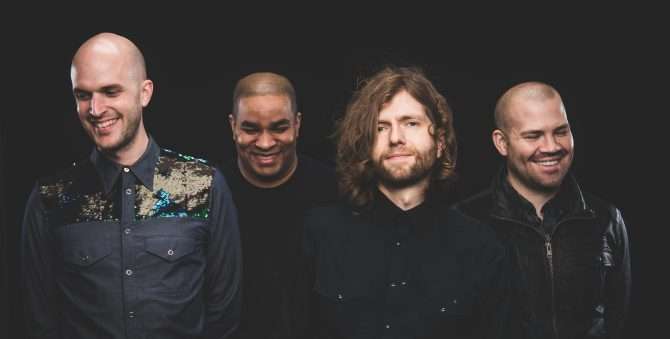 Chicago alternative rockers, Molehill—whose lineup includes vocalist and guitarist Peter Manhart, bassist and vocalist Trevor Jones, keyboardist and vocalist Greg Van Zuiden, and drummer Devin Staples—urge you not to be fooled by their name: “Molehill is more like a mountain.” Since 2008, the band have been blending progressive and pop elements with emotionally-driven lyrics. Having already hit two major milestones by self-releasing their debut 2012 full-length, Equinox, and 2015 follow-up EP, Tin God, Molehill are striving further with Hearts On Fire. The new three-song EP will be unveiled piece-by-piece, with each song coming out over a three-month period, from late February to early May.

As far as personal experiences with mental illness, I had three friends commit suicide in a five-year period from 2005 to 2010.

The third one happened to be a very close friend of mine. He had diabetes for most of his life, and I’ve heard anecdotes of people with diabetes suddenly “snapping” and doing violent things to themselves or their loved ones. I’m not sure if this was one of those cases, but it seemed like, out of nowhere, early in 2010, he was suddenly very unhappy. Even though, from my—and our friends’—point of view, it seemed like he was doing great: he’d just gotten a Masters degree and a promotion at his job, he seemed like he had things “figured out,” he was a smart, warm, friendly guy whom we all loved. While he didn’t have a steady girlfriend at the time, he had dated plenty of girls over the years—some lasted longer than others. He was sort of the “glue” of our social group.

But then, suddenly, he was talking about how bad things were for him. How no girls liked him, how he was almost 30 and everything just was going wrong, and he’d almost “missed his chance” at a happy life or something like that. It was kind of shocking. I remember one conversation of me saying, “Dude, you’re a great catch. There have been plenty of girls interested in you in the past. You’re fine, you’re the man, everybody loves you, don’t worry about it.” And he seemed so surprised: “You think I’m a great catch?!” I said, “Of course! I love you. You’re one of my best friends. This is just a passing phase. It’s February, everyone gets depressed in February.”

Apparently, he knew something was wrong, and he did seek help, but he had trouble finding someone in network with his health insurance. He did see someone who prescribed him Prozac, which he took for about a week, and then he went off of it—which I also think may have caused problems. His appointment with a psychologist was on March 9, and he jumped off the roof of his building to his death on March 8. This was almost exactly seven years ago.

I still call his parents every year on his birthday to check in with them. Our group of friends has sort of drifted apart since then—like I said, he was the glue. It’s still very surreal.

If I could go back to that time, I would force him to see someone out of network for help. I hate the fact that he had to wait two weeks or whatever it was for an appointment with someone covered by his insurance. When someone is in that bad of a state, just pay the money. Go seek help. There are so many resources out there for people who are depressed or thinking about suicide, I think there’s no excuse for not using every single one out there. And, if you can’t afford it, tell them; they will probably figure out a way to make it work.

Because there’s no turning back once someone ends their life. It’s a permanent loss for the world.

Part of the band culture in Molehill is emotional awareness and communication. We have regular band check-ins where we make sure everyone is doing all right—both with the band and their personal lives—and we give each other feedback on how our recent tour or recording session or whatever went. We always try to make sure that the members of the band are secure and happy in their personal lives, because we know how that can bleed into our group experience.

Whenever possible, we also try to have group get-togethers where we don’t talk about business at all, because so much of our lives is focused on pushing with the band in a lot of different areas. It’s good to take a break from time to time and try to enjoy life and the present moment.

PrevFear Of A Queer Planet: On Mental Health
Mental Health Spotlight Series Featuring Scout Paré-Phillips & Off With Their HeadsNext