My name is RJ Reynolds, and I’m the bassist for Stolas. I am 27 years old and have suffered from depression and anxiety since I was very young. These grew more severe during my junior year of high school when I moved to Las Vegas away from my family, reaching a low point as alcohol abuse and attempted suicide in my early 20s.

My experience has been that depression, like addiction, stays with a person permanently; once you’ve experienced clinical depression, it is a constant factor which you must always monitor. Those behaviors and subsequent habits that exacerbate it are easy to indulge, and likewise, the work toward self-care feels proportionately insurmountable in those moments. Additionally, depression itself discourages identifying and discussing it openly, which makes treatment difficult to manage on one’s own.

I know a lot of people like to cite music—or any other art form—as a release that is always available for them to set aside their concerns and feel completely rejuvenated, as if some wave of euphoria rushes over them and the world just drops away.

That’s not always the case for me. That’s not even the case most of the time. There are lot of times where I just sit down, plug my bass in, and practice for what feels like forever, and the whole time, I feel like every note and phrase is off. My timing doesn’t lock with the band. My idea has been done dozens of times and isn’t original. I shut my amp off and walk away tense.

However, I’ve learned to take a quick walk, shake it out, and come back to the instrument, because for all of the frustration it brings me, the discipline I’ve learned from music also furnishes me with the one tool I need to combat my depression: patience. It gives me an opportunity to step back from the problem and, instead of getting angry, adjust my efforts constructively. Though a very simple technique, it holds far-reaching applications for personal maintenance of depression, because it helps you trust your own mental acuity in the midst of self-doubt, and I would not have that without playing music.

I’ve learned to acknowledge when depression is hitting me hard. I like to pretend it’s a passive-aggressive bully at a party whose M.O. is to sneak into a room when I’m in the middle of a conversation and catch me unaware with a perfectly-timed verbal jab to undermine my confidence. My job is to know exactly where that jerk is at all times, to keep an eye on him, and acknowledge when he enters my thoughts and feelings. In this way, I can address those negative emotions before they snowball.

By recognizing when I’m feeling this way, I can remind myself to be patient with and kind to myself while I manage it. I celebrate small victories, which encourages me to do what I can with my day and accept my limitations. I think that mentality has also reinforced some important attitudes in my daily life, such as not holding oneself to someone else’s personal standards and taking on objectives incrementally rather than forcing a lot of work at once and losing track.

As touring musicians, we like to advertise the highlights of sold-out shows and house parties, and we’re quick to romanticize sleeping in a van, not showering for a week, and eating whatever we can get our hands on. And while those parts are definitely fun and with their own merit, living that way takes a heavy toll on one’s mental well-being over time.

You forego a reliable income and temporarily enter into financial freefall. Tensions get hot between bandmates with no way to separate or process conflict internally. You get small increments of sleep to tag-team a long drive and play a small show. When your morale is low with zero opportunity to replenish your personal energy, keeping a happy face on and interacting with an ever-changing cast of venue staff and concert-goers makes anybody balk. 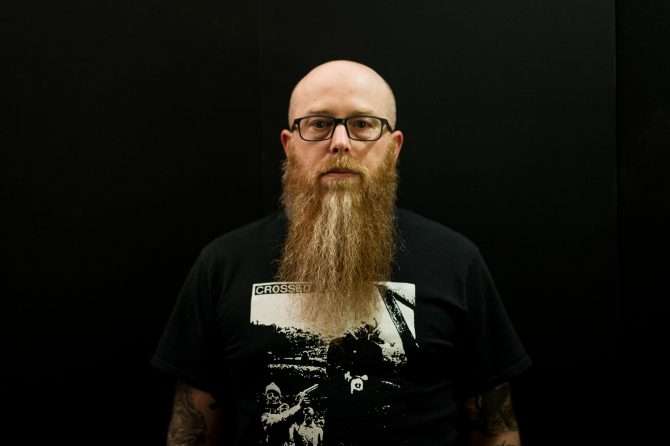 Known for collaborating with a diverse pool of musicians on multiple splits, Godhunter are poised to release a new EP entitled Codex Narco, which will feature the vocal talent of CHRCH’s Eva Rose and Thorne’s Josh Thorne, the bass mastery of Demon Lung’s Adam Sage, guitar work from Mountaineer’s Clayton Batholomew, and vocal, bass, and guitar from Methra’s Nick Genitals. The EP is set for release on May 19 via Battleground Records—with a cassette edition available through Baby Tooth Records—and all proceeds will be donated to Planned Parenthood.

While the EP does not stray from the band’s trademark darkness, its focus is internal rather than external, investigating subjects such as depression, dependency, and loss. In conjunction with the release of Codex Narco, Godhunter will premiere a video for their cover of Tegan And Sara’s “Walking With a Ghost” in support of suicide prevention.

I’m a complete mess mentally most of the time. My childhood was really screwed up and filled with abusive relationships, so I did a lot of shuffling from family members to foster homes to group homes and back again. I never really developed a lot of familial love or emotional connections with people because of the constant movement and distrust, so I tended to withdraw completely and lose myself in books and music. Since I could take them with me every time I moved around, they became my constant instead of family.

Over the years, I lost my little sister to abuse and, later, my little brother to suicide, so that family circle that does exist for me just keeps getting smaller and smaller, which doesn’t help any of these issue. I feel, as an adult now, that I never really developed a whole lot of the “right” emotions and experienced way too much of the “bad” ones, so I never really learned how to deal with other people emotionally and socially. I probably come off as distant or aloof or even angry to people, but I really wish they could understand that, most of the time, I’m just struggling to fit in and relate to everyone around—and usually failing miserably at it. I don’t know if people really understand how fucked up it is to be standing in a middle of a room full of people and still feel completely alone.

Music is my release from everything, so I’ve surrounded myself with it. My band is my outlet to scream at the world about shit; it’s my catharsis and penance all in one. I started my label, Battleground Records, and my festivals—Southwest Terror Fest, Northwest Terror Fest, and Austin Terror Fest—years ago as ways to keep myself busy while I healed myself of some problems that were plaguing me while I was younger, like alcohol and drugs. Now, they have developed enough that they keep me on track daily. I can’t get too lost in my own head that I neglect business, because so many people depend on me to keep getting shit done. The busier I am, the more stable I am, without a doubt. So, I’ve said this many time before, but music saved my life.

Well, I got really lucky in this regard. I found my wife years ago and, for some crazy reason that I still don’t understand, she’s the one person that truly understands me, is able to read my moods, and can always pull me out of depressive funks. Other things work too, like keeping busy with projects and staying active physically, but in the end, all of my peace and happiness really comes down to one person. I don’t know at all what I would do without her. Fuck, I don’t know if I’d even be here without her.

Yeah, there’s a lot we could do about this. I constantly see friends I know in this industry that probably have emotional or mental issues referred to as “weirdos” or worse.

Even heavy music has this bro-culture problem of pointing out people’s weaknesses and pouncing on them like jackals. You know, maybe that person wants to sit in the van all night because they just don’t feel comfortable standing in a room full of people making backhanded jokes about them. That’s great that you’re well adapted socially and emotionally, but weirdos make some great fucking music too, so maybe just keep the comments to yourself, bros?

We all, as a culture, need to start recognizing these issues and doing our best to protect these people in whatever way we can.

I think I’ve touched on a few of these already, but I think it’s important to mention how much our current political climate affects people. I’m pretty miserable about it, but let’s be honest: I’m a straight white dude in America, so I really don’t have a lot to complain about anyway. The way I am seeing the current administration affect my LBGTQ or POC friends is real and very frightening. People are afraid for their safety, for their very lives. If the shit hit the proverbial fan, I could probably get lost in a crowd full of straight white people. Too many of my friends couldn’t though. There’s nowhere for them to run, and they’re being attacked. If you can’t look at the current sociopolitical climate and see that it is drastically affecting people’s mental wellbeing, then I’d suggest that you have a pretty powerful set of blinders on.