“Polymath percussionist” Thor Harris—formerly of New York City avant-rock legends, Swans, and Austin, Texas, indie-folk ensemble, Shearwater—is now the mastermind behind Thor & Friends. According to their official site, the “project is intended as a vehicle for experimentation with the conceptual vocabulary of American Minimalism collaborating with a rotating cast of Austin-based musicians.” The band’s debut self-titled full-length was released in October of 2016 via LM Dupli-cation.

When Trump got elected, I was on tour in the western U.S. I, along with my bandmates, entered a period of disillusionment that I still struggle with.

I have since turned it into rage and lots of activism. I call my horrible Republican senator every day and tell some young staffer how outraged I am. I go to the Texas Capitol several times a week for protests or to object to some hateful bill being passed. It helps. When depression has me in its teeth, I withdraw from the fight. But most days, I am strong and I fight. Having a purpose has actually helped with my depression.

There are more and more people talking about depression, but the stigma persists. In the music world, we all talk about it a lot. Many of us compare medication stories. There is a good new podcast called “The Hilarious World of Depression.” It seems comedians have this even more than musicians.

If you have depression, you are not alone. It’s treatable, and you can have a truly kickass life.

Philly indie pop punk trio, Cayetana—comprised of vocalist and guitarist Augusta Koch, bassist Allegra Anka, and drummer Kelly Olsen—began by self-releasing a three-song demo in 2012. A follow-up EP, Hot Dad Calendar, and their debut full-length, Nervous Like Me, both came out in 2014 via Tiny Engines, who also released the band’s Tired Eyes 7” in January of 2016. That December saw Cayetana tackling their own Audiotree Live session, and in January 2017, they collaborated on a split for Poison City Records with Australia’s Camp Cope. Their newest album, New Kind of Normal, drops May 5 via their own label, Plum Records.

I have had issues with anxiety and depression for as long as I can remember. The past few years, they have been completely exacerbated. Now, I’m in a constant state of being aware of them and trying to work on it every day.

My anxiety issues became unable to ignore once the band really started. I realized throughout our first record, most of the lyrics I was writing were subconsciously written about anxiety. Writing became very cathartic, but at the same time, touring and playing live was emotionally exhausting. I experienced a life-changing panic attack at a festival in Florida that led to a spiral of deep depression and embarrassment.

Before we started writing our new record, I hit my breaking point. After a two-month tour, I came home and realized my hair was falling out—eyelashes, eyebrows, and all. My body and mind were so stressed, I could no longer mask it with drinking.

With the support of close friends, I started going to therapy every week. At first, it was uncomfortable. My first therapist told me, “Maybe you should just quit the music thing.” I left feeling hopeless and defeated. I felt like one no would understand how horrible panic attacks are. Worse than that, I just felt like I was losing my mind.

Luckily, I was able to find a new therapist that has been a huge support system for me. I started taking medicine two weeks before we went away to write the record. That resulted in a record deeply about mental health and healing.

I think I’ve come to terms with the fact that I will have to deal with this forever, so I’ve been creating ways to cope with it. Having a safe space to be alone on tour, like our van, is extremely helpful. I’ve also been more comfortable saying no to things when I’m having a particularly anxious day without being ashamed. Writing poetry [and] journaling for just me has also been a way to deal and evaluate my progress. Most importantly, being able to talk about it openly without shame has been the biggest turning point.

I think the best way to make change within the music community is to be able to talk to people about it openly. Touring can be very isolating and lonely; luckily, I have a few musician friends I can text to seek comfort in. Also, bands like Modern Baseball putting their health first in such a public way set a great example. People always say, “The show must go on,” but knowing your limits and being able to express them is way more important. Once we detach the shame that’s associated with mental illness, I feel like people will be able to seek help more effectively.

Before Trump became the president, I would take week-long breaks from social media. Now, it’s a little bit harder, because I always want to know exactly what’s going on. Every day since has been like damage control. The political climate right now is horrific and absolutely stress-inducing. Creating a balance of keeping yourself informed while also knowing what you’re capable of handling is extremely hard. It is something we talk about every day in our band. Being aware of our surroundings while touring is now way more important under a Trump presidency. I worry every day about losing my health insurance and not being able to have access to the medicine I need. I also know with all the acceptance of hatred this administration fuels that people will need access to mental health providers now more than ever. 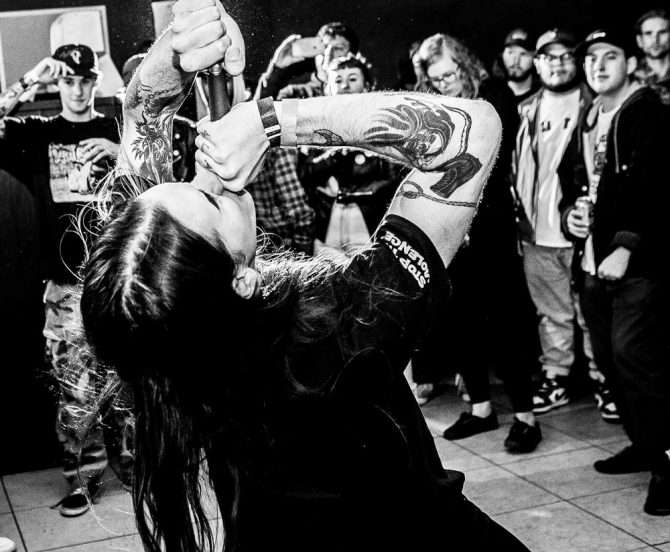 San Francisco hardcore thrash crossover five-piece, Primal Rite, are comprised of a veritable who’s who of Bay Area scene vets: vocalist Lucy Xavier, guitarists Jake Dudley and Jason Brownstein, bassist Max Wickham, and drummer Jeremy M. Formed from the ashes of Scalped in early 2016, the band burst out of the gate with a handful of impressive short releases, including  the “Pestilent Clutch” single for Warthog Speak; their debut EP, Complex Life of Passion, for Grave Mistake and Pop Wig Records; and most recently, the three-song EP, Sensory Link To Pain, released March 17 via Revelation Records.

I was sent to several therapists throughout my adolescence, took numerous medications for mood stabilization/antidepressant and I attempted suicide twice in my early 20s. The first time, I was hospitalized for three days; the second time, I was in a behavioral health rehabilitation facility for a month. Definitely been through a lot in that department, but I’m very happy to be alive today. Things have gotten much better the last few years, but issues like these don’t ever just disappear. We all find our ways to live with it, and we should remember with compassion the ones who didn’t.

It’s definitely a huge part of it; perhaps it even gives me strength in the arts. When writing lyrics—or even performing, to an extent—I’m trying to convey emotion. It seems obvious to me that my emotions are really complex, because I have so much trouble processing them myself. So, I think when I’m really honest and committed to my writing, or focused on my performance, I think I can bring a lot to the table. It’s not only therapeutic for me, but hopefully, it has the potential to help others as well. The flip side is that depression can often make you apathetic to making art [and] doing things.

Not buying the health system’s garbage rhetoric and treatments. By all means, everyone should be encouraged to seek help and explore every option available, but often, the mental health field is only there for you in extreme emergencies and only rehabilitates you to a point of safe release, without real progress or reform. I had to focus and do a lot of searching within myself to find ways to counteract urges towards unhealthy behaviors. It will be different for everyone. You just have to learn to live with it; it’s part of you. There’s no cure—once I accepted that, it was very freeing.

How we talk about it is the biggest step to take. It carries so much stigma, and I think why so many people hit bottom before getting help or commit suicide is because they don’t feel comfortable talking about it. Because no one is. It’s not a bizarre weakness, it’s not taboo, it doesn’t make someone “crazy,” and until we can talk about depression, bipolar, [and] PTSD like you would any other chronic illness—like diabetes, for instance—people won’t get the help they need. People with a public voice can help shift this dialogue, I think. Once we can really talk about it, we can really see some positive change.

Being somebody of mixed race, as well as nontraditional gender/sexuality, the current political climate absolutely affects my mental health. I think it’s that way for a lot of people. POC, immigrants, queer and trans people, women—there’s a lot to be afraid of. It’s easy to get brainwashed into thinking your life and your voice don’t have value. But music and subculture communities can be a safe haven from this, as well as a way to fight back and enact change. Artists should keep this in mind. Art has always driven rebellion and progress—don’t let that slip away.