When I think about the music I’ve been drawn to most, it tends to come from the outcasts, outliers and orphans of the scene. They usually aren’t edgy enough for the hip set, but also lack the universal appeal the mainstream craves. I’m not sure what this says about me, but I’m obviously not alone, or said bands wouldn’t have careers to begin with.

A couple examples would be groups like Cheap Trick, Sparks, The Adicts, Lords of the New Church—stuff that’s a little more difficult to pigeonhole, and thus more difficult to market to often alienated audiences.

This installment focuses on a few reissues and new releases from artists of yore, who for whatever reason, can’t be shoehorned neatly into one specific box—often times to the detriment of their careers.

Throughout the ‘60s and ‘70s, The Move cranked out a strange hybrid of psychedelic rock, pop, prog, oldies revivalism and classical music. This quirky, schizophrenic beast was led by multi-instrumentalist and idiosyncratic Roy Wood, and would ultimately be most famous for the band it later spawned, Electric Light Orchestra (ELO) and the ones it influenced, like the aforementioned Cheap Trick.

Esoteric Records has recently released two of the band’s key albums, in ultra-posh 3-disc editions. 1968’s debut Move has a heady mix of off-kilter originals like the bizarre, maddening “Cherry Blossom Clinic” and the joyfully ironic hit single “Flowers in the Rain,” which featured a medley of classical instruments to fill out its psychedelic sound. The album also included three covers, ranging from ’50s rock ‘n’ roll to modern day acid rock.

1970’s Shazam was the band’s second studio album, and saw it moving away from the quirkier approach of the first LP in favor of a more proggy, proto-metal direction. Featuring just six songs, three of which were covers, the album showcases heavier, more intricate instrumentation as demonstrated on the 7-minute sequel “Cherry Blossom Clinic, Revisited.” Sonically superior to the first LP, Shazam also features strange between-song banter, which serves to heighten the insanity. 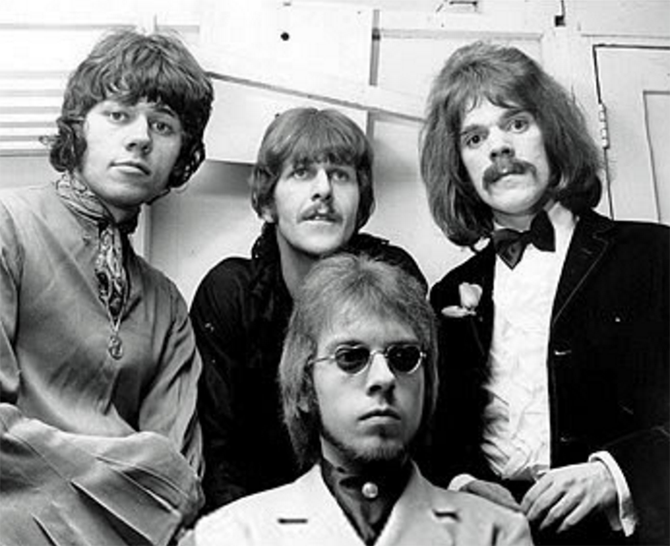 As part of its comprehensive reissue program, Esoteric has packaged each in plush, multi-disc editions that feature each album in its original mono mix, along with loads of bonus tracks and booklets. For those looking for something completely different, The Move is a great place to start. (Esoteric) 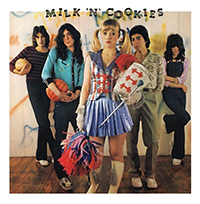 To the uninitiated, Milk ‘n’ Cookies is a little hard to digest on the surface. Straddling the line between proto-punk, bubble-gum and glam rock during the mid-’70s, the young New York quartet quickly relocated to London to record an album for Island Records, due to their association with the management of Sparks, who’d recently struck gold on the same label.

The band’s punk cred was absolute as they’d been had been playing clubs like CBGB’s and Max’s, opening for the likes of The Ramones and Talking Heads. But rather than sticking to the alternative credo of the their more seasoned colleagues, the band’s mission was to make sugary-sweet, radio-friendly rock for the masses. Such aspirations were quickly dashed, but the band was successful at crafting an album’s worth of creepy power-pop gems, featuring the nasally, fey vocals of Justin Strauss and misshapen licks of future electronic pioneer, Ian North.

Besides the strange band name, song titles like “Dee Dee You’re Stuck On A Star” and “Rabbits Make Love” re-emphasize the notion that something’s seriously not quite right— and that’s exactly why this record rules. This 2-CD reissue presents the original LP, plus loads of demos and rare tracks, along with expanded artwork. Also look out for the amazing, super-deluxe vinyl version—a must for diehards. (Captured Tracks) 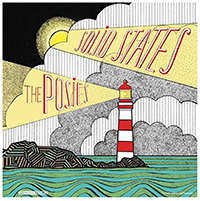 While hardly a household name, US power pop combo The Posies have amassed a low-key, but rabidly loyal following since their 1988 debut. Over the years, band’s sound has encompassed elements of ’60s pop, jangly folk and post-punk, augmented by the intricate harmonies of core members Jon Auer and Ken Stringfellow.

Solid States sees the band return with its eighth album and a revamped sound. The overall aura of the album is slightly darker than other releases with a stronger focus on atmosphere and space, as evidenced in the loungey “Unlikely Places.” Rife with mood and melody, its gentle groove is driven by a slow, hooky bass line. “We R Power!” is a strident call to arms that thrives on big harmonies and a rousing refrain. While not every track measures up to these little charmers, Solid States is a valiant effort from one of rock’s more undervalued outfits. (My Music Empire) 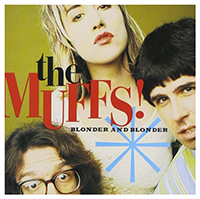 The Muffs
Blonder and Blonder

To commemorate the 20th anniversary of its original release, The Muffs second album gets a deluxe reissue courtesy of the ace revivalists at Omnivore Records. The brainchild of bassist/vocalist Kim Shattuck, who’d been one of the core members of LA vixens The Pandoras, The Muffs saw her get back to her scrappy punk rock roots. Fast, gritty and brimming with bittersweet hooks, Shattuck’s songwriting hit its apex in numbers such as “Oh Nina,” “Sad Tomorrow” and “What You’ve Done.” 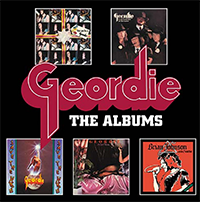 Years before becoming larger than life as a key member of AC/DC, Brian Johnson slogged the UK clubs in a quasi-glam band called Geordie during the ’70s. Although the band lacked the glittery nuance of Bowie and the star power of T.Rex, its loud, raucous sound and boorish style made for a fairly potent combination.

While often associated with the swaggering glam antics of Slade and Sweet, Geordie had bluesy undertones, recalling Led Zeppelin, The Stones and Faces. With Johnson’s powerful pipes driving the heavy sound, the band released a few albums during the ’70s to mild success before splintering, with Johnson eventually taking over vocal duties for the newly deceased Bon Scott in AC/DC (a decision I’m sure he doesn’t regret). Nevertheless, the band had a string of stomping singles—“Don’t Do That,” “All Because Of You,” “Can You Do It”—that are worth a second look.

This new box set includes the band’s four studio albums Hope You Like It, Don’t Be Fooled By The Name, Save The World and No Good Woman, plus Brian Johnson and Geordie Revisited, which features re-recordings of the band’s hits. Each disc comes remastered, with artwork that replicates the original LP jackets. (Cherry Red)

Singer Graham Bonnet is possibly the most oddball of the bunch here. Starting out as a teen pop singer in the ’60s, he was picked a decade of so later to replace Ronnie James Dio in the hard rock powerhouse Rainbow. Possessing a vocal range that puts most others to shame, Bonnet was tapped with the aim of making the band more radio friendly in the States. Lasting just one album, the singer would soon join another heavy hitter in the Michael Schenker Group, before striking out with his own band Alcatrazz.

From a technical standpoint, Bonnet’s vocals are heavy metal writ large, with a distinct style that is both powerful and melodic, and most of all, like no other. The trouble was everything else. Sporting a prim Super Cuts hairstyle and glasses, Bonnet’s image had more in common with Miami Vice than anything remotely metallic. His lyrics often come off as corny, with embarrassing stage banter to match. But even with all the drawbacks, Bonnet can belt out a tune as evidenced on these new reissues: the 2-fer, Graham Bonnet/No Bad Habits and Back Row In The Stalls.

These solo outings are a mixed bag of hard rock, pop and quasi-R&B, the former featuring a slew of cover songs showcasing Bonnet’s vocal acrobatics, making it the strongest of the pair. (Hear No Evil) 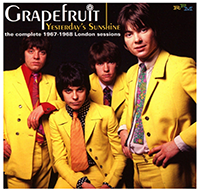 Grapefruit’s biggest claim to fame is that the band was mentored by the Beatles for a spell. And while it still remains a mere footnote in the ’60s British rock scene, the band—led by songwriter George Alexander—had a knack for crafting intricate psych-pop numbers, as evidenced in the hauntingly cool “Lullaby,” which happened to be produced by none other than Lennon and McCartney.

Yesterday’s Sunshine features most of the band’s early key tracks—20 in total—including two versions of the aforementioned “Lullaby,” which will be a treat for collectors of this rare strain of psychedelia. The band would only last a couple of years, but its two studio efforts are highly sought-after rarities. This new comp contains much of that material, all in bright and shiny remastered sound. (Cherry Red) 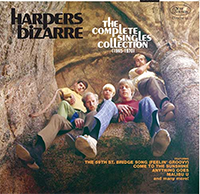 Santa Cruz natives Harpers Bizarre made a bit of a splash by covering the Simon and Garfunkel hit “The 59th Street Bridge Song (Feelin’ Groovy)” at the height of its popularity during the mid ‘60s. But the band’s actual impact is far greater than it gets credit for—its smooth, layered vocal arrangements helped define the breezy California sound that most associate with the Beach Boys. This was soft pop with a bittersweet psychedelic edge, making for a unique, atmospheric listening experience. After releasing a few albums, the band would break up with little fanfare—the most notable thing being the fact that member Ted Templeman would eventually go on to produce Van Halen a decade or so later.

This comp features a massive 26 tracks, dating all the way back to the band’s early days as The Tikis, and includes original mono mixes along with a deluxe booklet. For fans of both the California sound and Baroque pop of the 1960s, this one’s a keeper. (Now Sounds)

For questions, comments or something you’d like to see, drop me a line at Retrohead77@yahoo.com.

PrevTour Diary #4 – Sundressed On The “Let’s Try This Again” Tour
Helping YOU Prepare For This Is My Fest 3: Kevin Skalba co-founder of This Is My Fest & False PositivesNext