When I received the latest batch of reissues to cover in this column, it dawned on me how little coverage the so-called fairer sex gets when it comes to punk rock and affiliated genres. In my mind, some of the edgiest, most original musical rackets have come from female musicians, particularly ones that aren’t necessarily household names, such as Lene Lovich or Gaye Advert (more on them in future installments).

Three such recent reissues feature punk and rock bands driven by tough women that have sadly gone missing from the scene. Stay tuned after that for other retro releases of late that you also should know about.

The Nymphs originally hailed from New Jersey, but quickly made their way out West to Hollywood in the ’80s. Fronted by the uncanny and often difficult Inger Lorre, the band seemed poised to compete with the best of them.

Backing up just a bit, the Hollywood rock scene during the ‘80s was split into a several different camps. Most renowned was the Sunset Strip that generally catered to metal fans, from the heavier side to the pop variety. Then there was the seedier side of Hollywood, where punks, goths, glam disciples and freak dwellers congregated in a fairly harmonious scene. Case in point, it wouldn’t have been uncommon to see punk acts like TSOL share a stage with Red Hot Chili Peppers or Guns N’ Roses on a given night out. Sounding like an unholy menagerie of The Stooges and Jane’s Addiction, The Nymphs fell firmly into the latter camp. And after a revolving door of lineup changes, Lorre and her brood began to draw a sizeable following.

But besides the keen fashion sense and boom-boom bravado, Lorre’s offstage antics were equally explosive. Known for a quick temper and an unflinching dedication to her art at all costs, Ms. Lorre was not averse to public outbursts. Arguably, her most infamous episode involved urinating all over the desk of Geffen exec Tom Zutaut. Distraught over constant delays in the production of the Nymphs’ debut, she relieved herself of her grievances, leaving a puddle of negative feelings behind.

While most wouldn’t think of expressing their emotions in such an explicit fashion, Lorre felt justified. Signed to a major label at the same time as several other seedy Hollywood upstarts who would go on to greater acclaim, her band languished for months due to delays with the label and producer Bill Price (Sex Pistols). Subsequently, the album would not see release until 1991.

In spite of all the chaos, the band’s self-titled debut would turn out to be a triumph in song craft, sonics and straight-up badassery. The album opens with the post-apocalyptic drive of “Just One Happy Day.” The heavy riffs coupled with Lorre’s acidic tones and lyrical dejection make for an explosive listening experience. The wonderfully disjointed “Two Cats” uses a bastardized shuffle beat and a hooky verse to get its point across, while the anti-ballad “Imitating Angels” is the album’s high mark. A jagged guitar refrain gives way to Lorre’s melancholy melodies and poetic verse with an infectious chorus that is both sad and a tad bit uplifting at once. The underlying feedback and noise courtesy of Siegel and Merrick, add further atmospherics to the mix. Speaking of which, Price’s production gives the band a larger-than-life sound with special emphasis on Lorre’s caustic croon and the heavier-than-fuck backbeat. Another standout out is the punk-dirge “Supersonic,” which features guest vocals by Inger-idol Iggy Pop on spoken word.

In spite of such a strong set, the album failed to catch fire, even during the heady days of pre-grunge. The Nymphs had all the hallmarks of the movement that was to take shape, and should’ve been one of its leading lights. The loose and low guitars, angsty lyrics and heavy mood swings were the band’s trademarks and would soon become commonplace. But The Nymphs did it with style—and were Hole, Babes in Toyland—and even Pussycat Dolls—years before they all were. In a classic case of too much/too soon, the band would disappear before making its mark. 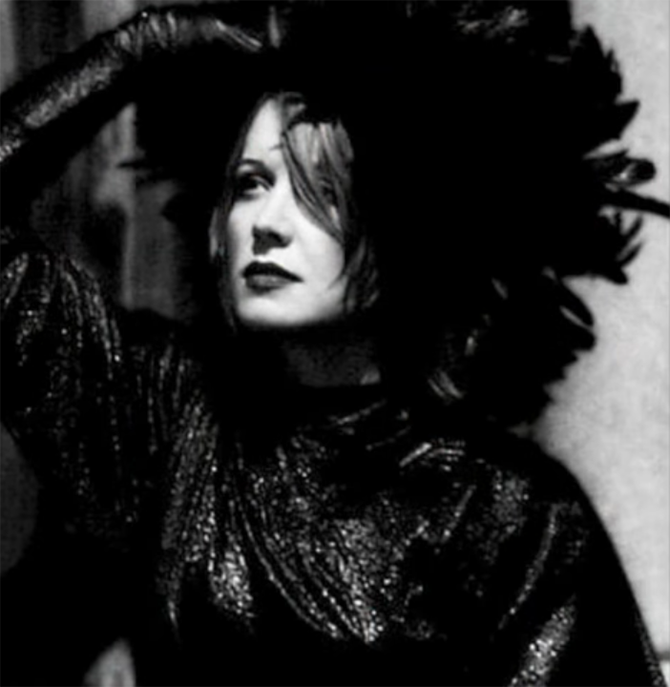 You can now experience all of the high drama that was The Nymphs in a sparkling new reissue of the highly under-valued debut, via ace reissue label Rock Candy Records. The new CD features the entire album remastered, plus a lengthy essay on the band and its exploits.

Being from the Bay Area, it’s hard to think of the late ’90s without cracking a smile about Palo Alto’s favorite sons (or in this case, daughters), The Donnas. I even remember seeing one of them at a friend’s gallery show and thinking how she was almost too down-to-Earth to be in one of the biggest buzz bands of the day, which was part of the group’s appeal.

The classic Donnas lineup consisted of Donna A. on vocals, Donna R. on guitar, Donna F. on bass and Donna C. on drums. Playing a curious cocktail of pop punk, garage and rock ‘n’ roll, these surly teens had a knack for satirical lyrics and fist-pumping anthems, as evidenced on their now legendary albums for indie label Lookout! Records. But even as the band evolved, it would do an amazing job at retaining all that was special about its humble beginnings.

Enter Atlantic Records and Spend the Night. Released in 2003, the slickly produced record was a far cry from the early days and bristled with arena rock energy and pop-metal hooks. The seeds were sewn on the band’s prior album The Donnas Turn 21, but now with a substantially larger budget and team behind them, this major label debut was a stunner, and its recent reissue on Hear No Evil Records does it due justice.

Kicking off with the AC/DC onslaught of “On the Rocks,” the band quickly cuts into the single “Take It Off.” This little burner shines immediately—courtesy of Donna R’s biting riffs and licks. The bastard love child of Mick Mars and Johnny Thunders, Ms. R. far exceeds her young years on this album and is still one to watch. “Who Invited You” is a fun stick in the eye to the parasites and leeches of the scene, while “I Don’t Care (So There)” furthers the cause with a dash of sass and heaping doses of six-string bluster.

Upon its initial release, The Donnas were seemingly everywhere—tours, soundtracks, zines, etc. Yet, they always stuck to their guns, eschewing vacuous glamour poses and retail endorsements in favor of their art—and their college studies. That’s kind of punk rock in itself. This new reissue features a gaggle of bonus tracks, including “Backstage” from the film Freaky Friday.

Speaking of freaky, or at least freakin’ good pop punk, The Muff’s 1997 opus Happy Birthday To Me has also just seen a top-shelf reissue, courtesy of Omnivore Records. For more info on the band and frontwoman Kim Shattuck, check out my review of the band’s Blonder and Blonder reissue. With that and this new release, I have two things to add. For straight-up pop hooks that affix to the psyche like epoxy, Happy Birthday is the stronger set, including the manically melancholy “Crush Me” and the snarky and addictive “Is It All Okay?”.

The second thing I wanted to touch on was that I erroneously referred to Shattuck as the bass player in that last review. While that was true of her former band The Pandoras, Shattuck is, and always has been the axe master of The Muffs. (Sorry Kim!) Either way, this reissue kicks some serious arse and still sounds as relevant as all hell, some 20 years later.

Diamond Head
Lightning To The Nations – The White Album

While probably best known as being faves of James and Lars from Metallica, Diamond Head definitely had the goods to be major players in the New Wave of British Heavy metal (NWOBHM) scene of the early ’80s. With a world-class singer in Sean Harris and metal riffs now etched in stone for the ages, the band could’ve been the next Zeppelin, but failed to make hardly a blip on the scene.

Released independently in 1980, “The White Album” was the band’s debut and became known as such due to its low budget plain white cover. But tracks like “Am I Evil” have become metal standards writ large, with no less than Metallica and Megadeth singing their praises. Now you can own this ultra-rare artifact in superior sound culled from the master tapes. (Cherry Red)

This Scottish band was formed out of the ashes of post-punks Altered Images. More refined and soulful, Hipsway’s self-titled debut hit the shelves in 1986 to moderate success in the UK and Europe with the single “The Honeythief” leading the way. This 2-disc reissue comes with 16 bonus tracks in fully remastered sound. (Hot Shot Records)

The Magic Mushroom Band
Pictures In My Mind: Anthology 1984-1994

When psychedelia crept back into the music scene during the ’80s, bands like Echo and the Bunnymen, Primal Scream and Dukes of Stratosphere quickly rose to prominence. But besides the mainstream merchants, there was also a more underground thing happening with groups like The Magic Mushroom Band leading the way.

This new comp provides a comprehensive overview of the band’s catalog along with tracks from two studio albums, plus previously unreleased recordings for a total of 31 tracks that showcase the band’s rock and pop sides. Check out the far-out “Magick Eye” for trip back in time, set to a driving beat. (Cherry Red)

While it may seem hard to fathom, Def Leppard was once peers in the NWOBHM with the likes of Diamond Head, Motörhead, Saxon and Iron Maiden. That was before its mid ‘80s transformation into pop metal demigods, a status it still retains.

This live CD/DVD set features a live theater set from 2016. The sonic and visual quality are excellent, the production crisp and on-point. And while some may ponder the need for such a set, I equate it to snatching up that discounted Foreigner comp in the used CD bin at your local record shop—just to be able to have fast access to that handful of killer hits when the mood strikes. And there’s a lot of that to be had here. (Eagle Rock)

Tokyo Blade
Knights of the Blade

NWOBHM also-rans Tokyo Blade cranked out a decent approximation of Judas Priest-style metal during the ’80s, but never could quite catch a break. This svelte little box set comes with four of the band’s main albums, including Night of the Blade, featuring second lead vocalist Vic Wright out in front for an entertaining set. Very much a product of its time, this set should do well to satiate metal completists. Each album comes complete in sleeves that replicate the original are work. (Hear No Evil)

For questions, comments or something you’d like to see, hit me up at Retrohead77@yahoo.com. Cheers, Kaz.