Scene Not Heard shifts the focus from the individuals who create the best albums to take an inside look at the behind-the-scenes jobs that keep the industry running. Go beyond the music and meet the people who keep your favorite bands in the public eye…

Putting together a playlist full of the best emo hits is a difficult job. There are a ton of songs from the late ’90s and early 2000s that bring a sense of screaming nostalgia. From My Chemical Romance to Taking Back Sunday to The Goo Goo Dolls to The Killers, that era remains one of the fondest for fans everywhere. Emo Nite cocreator Morgan Freed explains, “I think it was before there were rooms full of songwriters trying to make the next ‘hit’ song. It was when bands were bands to be bands, not to become the next big thing—super organic, super sincere. Plus, that was the last shit where you had to use physical albums to play songs.”

Albums like Fall Out Boy’s From Under the Cork Tree and Paramore’s Riot!—and even contemporary albums such as Joyce Manor’s Never Hungover Again and Tigers Jaw’s spin—offer emotionally-charged songs with soaring hooks and crashing chords that keep bringing crowds of people together.

Emo Nite has become a thrilling venue for people across the U.S. to let their energy and smiles come to life while special hosts roll through DJ sets built to shake the room. Creators Freed, T.J. Petracca, and Babs Szabo discuss starting Emo Nite and making it the best party currently touring the country.

TJP: We kind of just wanted to hang out at a bar with our friends and pick the music we liked, and then, we realized a lot of other people wanted to do the same.

BS: The bar where we first started Emo Nite was actually pretty cool about us throwing it there, but they wouldn’t give us a Thursday night, because they didn’t know how well it would do. They let us do the first one on a Tuesday, thus why we used to call our party Taking Back Tuesday. It’s kind of funny that we never changed the day of our event from Tuesday in L.A. ever since. Tuesday just works here.

What do they want out of attendees at Emo Nite?

MF: Basically, I want it to feel like the most fun party you’ve ever been to. I want people to meet new people, make new memories, and stay in tune with music.

TJP: We just want everyone to have the most fun the entire time. We try not to let the party ever stop. I am tired of going to shows and watching a band with my arms crossed, then waiting around for 20 to 30 minutes watching another band and just standing there. I want everyone to be completely engaged and enjoying themselves and the entire Emo Nite experience from start to finish. There are no egos involved with Emo Nite; everyone can kind of make the night their own and be involved however much or as little as they want. They can literally hop onstage and be the star of their own show.

BS: With Emo Nite, we try to create the same sense of community that a show would have. It’s a celebration of the songs we grew up listening to, but we also focus on current music and culture. We want Emo Nite to always remain a place where everyone is really respectful of one another, where no one is above anyone else.

The humble creators still have not “made it” in their eyes, and they continue to make Emo Nite one of the most important aspects of their day jobs. While they boast accomplishments such as having UNDERØATH and Dashboard Confessional play acoustic sets, they really just want to keep the inspiration and party alive. What is the most inspiring thing they’ve witnessed so far?

MF: I think the tightest thing is we could basically walk away and a crowd would know how to run the night now. We’ve been doing it for so long that a lot of the crowd has become part of the team, and I think that’s super inspiring to see people start as observers [and become] producers because of how much they fuck with it.

TJP: When someone had a sign that said: “Emo Nite saved my life.”

BS: So many people have gotten engaged at Emo Nite, and a lot of those people actually met at Emo Nite! That’s the coolest part. It’s inspiring to see people find love.

When I attended Emo Nite in Denver, I understood the premise, but I entered with a slight suspicion about what was going to happen. I obtained some water, a couple slices of pizza, and was immediately shouting along—with a mouth full of food—to “MakeDamnSure” by Taking Back Sunday, but the song I went hardest to was “Beating Heart Baby” by Head Automatica. I felt rejuvenated and alive in this safe space. Emo Nite is an incredible achievement in the music industry, flushing out a sense of relief and catharsis while the love spreads around the room in the form of sound waves. 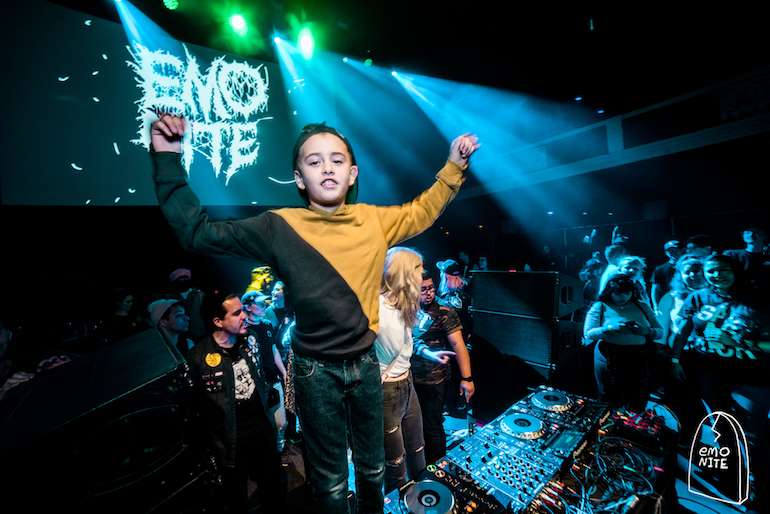