There’s a long list of artists to check out at this year’s Voodoo Experience. Here’s just a few of the performances we recommend you don’t miss!

Outkast have been out all summer on a worldwide festival circuit, and Voodoo is just another notch in the bedpost. Since their shaky return at Coachella in front of an unresponsive, confused audience, they’re finally hitting their stride and killing it like they did back in the day. Their setlist is just as eclectic as the dudes themselves, spanning from album to album without leaving much to desire. Beyond crowd favorites like “Hey Ya,” expect older cuts like “ATliens,” “Ain’t No Thang,” and “Rosa Parks.” Besides, if you’re not grinding and making out during “SpottieOttieDopaliscious” you’re doing an Outkast concert wrong. Hootie hoo! (Tyler Gibson)

Slayer is easily one of the most important bands in the history of heavy metal thanks to their iconic brand of thrash that’s still wrecking necks after three decades. Though the band took a massive hit with the departure of drummer Dave Lombardo and the death of founding guitarist Jeff Hanneman, they are still going strong thanks to guitarist Gary Holt of Exodus and returning drummer Paul Bostaph. They are the perfect band to see on Halloween night and the opportunity to see them and Outkast back to back is worth the price of admission by itself. (Brandon Ringo)

If there’s a band that embodies the spirit of a Voodoo Experience, it’s Twenty One Pilots. On record, the band’s mix of indie pop and alternative hip hop is enjoyable, but there’s an otherworldly transcendence that takes place in the live setting. There’s something magical in this duo’s performance, something that doesn’t just ask for the listener’s attention and participation; it flat-out demands it. The only time I saw Twenty One Pilots, they opened for Bassnectar, Kendrick Lamar, and Empire of the Sun. The fact that Twenty One Pilots was the best performance that day should be all you need to know about this must-see live act. (Nicholas Senior)

Flushing Queens native born via Albania, Action Bronson is the hardest working man in Hip-Hop. Since 2011 he has released two EPs, two LPs (a third being released at the end of 2014 entitled Mr. Wonderful), four mixtapes, and had over fifty guest appearances. More often than not, Bronson’s lyrical themes are focused on food, the fairer sex and wrestling, name dropping everyone from The Brooklyn Brawler and Greg Valentine through to The Iron Shiek and Macho Man Randy Savage. Bronson sounds similar in tone and pitch to that of Wu-Tang Clan’s Ghostface Killah, however his lyrical themes and delivery separate the artists from any other comparisons. I had the opportunity to see Bronson live last year. He was twenty minutes late and apologized for this, appearing on stage holding a bunch of grapes stating that he was busy eating them. He was kind enough to ask members of the crowd if they wanted any and began to share them. From the start of the show until the end he was in the crowd, as he felt too far away from the audience which made for a really intimate gig. At one point Bronson proceeded to walk towards the toilet during the chorus of one of his songs stating he needed to piss, went in, does his business and came back out all the while still rapping his ass off. That’s what to expect when you see Bronson live, an artist who’s work ethic is just a prolific as his live performances. (Jason Fullerton)

Manchester Orchestra seem to be a somewhat underrated band when it comes to their genre. Hailing from Atlanta, they are straight to the point no nonsense rock with big riffs and even bigger choruses. Frontman Andy Hull has pretty unique sounding vocals, which in turn help make the band have that much more of a distinctive sound. They have released various records back to back with no sign of dwindling. If anything, with each release they seem to improve upon their last. Manchester Orchestra are also a band that like to interact with their fans and this is evident with their continual release of podcasts giving an insight behind the music and at live shows where segments of crowd interaction are frequent in between sets. (Jason Fullerton)

The Foo Fighters truly are one of the last great rock n’ roll bands left on the planet. There really aren’t many great rock bands left that can both flirt with the mainstream, but also keep their more underground-minded fans satisfied. Also, it doesn’t hurt that they are seriously one of the greatest live bands on the planet. Dave Grohl’s energy onstage is absolutely addictive. Their headlining set on Sunday will be one you absolutely SHOULD NOT miss. (Brandon Ringo)

When examining the Voodoo lineup this year, one of the most fascinating bands on the bill has to be The Melvins. Formed by guitarist Buzz Osbourne and drummer Dale Crover 30 years ago, the band’s sound has evolved in many different forms over the years, but two things that have stayed the same: volume and weirdness. Few bands are as loud as The Melvins and nobody is weirder. Though their set on Friday falls right between Slayer and Outkast, if you want a perfect dose of gut-rumbling sludge, you won’t regret giving these weirdos from Seattle a shot. (Brandon Ringo)

For everything Voodoo, visit worshipthemusic.com. 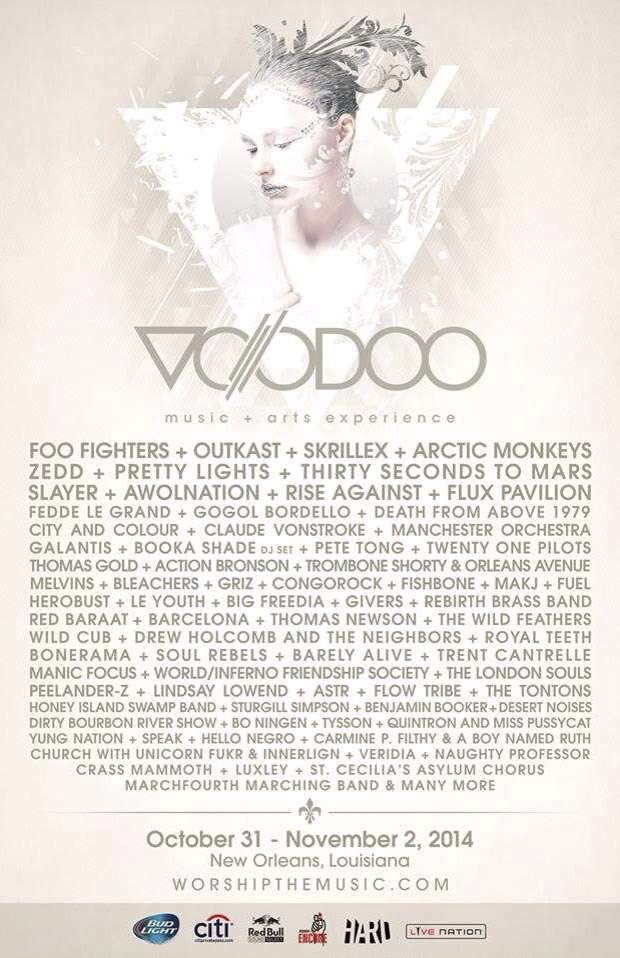