Photos by Jay Maude of @jonathanandjonathan

Dinosaur Pile Up have hit the road for a string of shows, supporting Brand New. We’ve teamed up with guys to bring you the tour diary; check out the first installation here, the second installation here, and the third below! And be sure to pick up the band’s full-length Nature Nurture on iTunes here.

Hey there how are you? SYYYYYYYYYYYYK!!

SO. Yesterday we played Pittsburg. It was awesome. We got in the night before and hooked up with the Brand New dudes in town for food. We owned the juke box and between both bands owned early punk and 90’s alternative. Weezer and Deftones had their time to shine and somebody in BN spun Peninsula and Heather off of Nature Nurture. Our table shouted a universal “WHUT??” It was a good time. When then went and hit this bar called Jack’s with Jesse until WAY too late. Brian had gone to hit the casino which we were gonna do but then we remembered – WE HAVE NO MONEY TO BET. BOOOOM! So we opted for cheap beer. And indeed, we did the cheap beer. We ended up hitting the hotel, Jesse got a PINT of ice cream which in a British reality is a TUB. Not a pint. A tub. We discussed that for way too long. There has been a weird amount of ice cream on this tour. I even ended up eating a tub in bed hammered and everybody else was asleep. It was kind of weird. Next day we hit the venue – that place was MASSIVE and it was super cool – the Stage AE right next to the stadium. We had an awesome show – although my throat was even more shot than usual. Bad Matty had been drinking and eating ice cream at 4am oh shit. We pulled through and played pretty raw. People were into it. It was a cool vibe. I watched Brand New from side of stage again, Sowing Season is just TOO massive. So intense. Went out front for the end of the set. Did merch – it was cool. After we sat around with the dudes, and then played basketball until about 1.30am with all the BN guys. Turns out Nate their Tour Manager and Jesse were actually pretty good! Turns out – we were not. It was Jesse’s birthday, and it had been mine two days before, so J’s wife Andrea had sent him this mad ice cream company’s ice cream ON DRY ICE, with a card that he showed me – and it was addressed to both him and me. She’s awesome and I was very touched. So we all stood around with the whole BN crew and all the dudes, riding a bike, playing basketball and eating ice cream on this trolley thing. It was funny as hell.

We just got to Columbus Ohio, the LC Pavilion so I gotta go.

I just ate a fucking cheese steak for breakfast bitches.

SO. Two days ago we hit Columbus OH and had a rad time. We turned up at the venue and I was freaking moaning about my voice for a change. Fuck I bore myself. Can’t help it though – I worry about sucking because I hate sucking. I hate letting people down, the guys and everything. So I hate when my throat is shredded and I moan about it constantly. Aaaaaaaanyway. As soon as we got in there we just started hitting the honey and throat coat teas and the Jamesons and what felt like 10 seconds later we were on stage shredding to 2,000 people or something. It was fucking killer. It was a great show, Mikey broke his snare half way through so we had to chill for a second and I talked to everybody for a little while – which I never really like doing because I’m fucking awkward. It’s not like I don’t want to talk to people or anything – I just usually end up tangling my words or saying something that just doesn’t make any sense at all. So I like to just stay quiet. But I said a couple of things when Mikey was fixing his drum and it was cool. Right after we hung out, Total Slacker were playing next door at the Basement, we like those guys and spin their stuff in the van sometimes, so we went and checked them out. It was a cool vibe in that place. After we went and got some pizza up town and then bailed.

Jim just admitted that he went to Universal Studios and went on the Jaws ride – as a foetus. I’m still laughing. Foetus Jim, livin’ it up.

We love Philly. It’s rad. We we’re playing the Mann Theatre last night which was a total trip because it’s FREAKING. MASSIVE. We played the outdoor stage, not the amphitheater, so it was like we were playing a festival just for Brand New. It was cool. Oh yeah, and crazy hot. Jesse messaged Mikey saying maybe he could come on stage with us and end the set on Nature Nurture with us. We were stoked so when we got there we hung out and sound checked with him and stuff. It was a super moon too which was pretty cool, I’d never seen one of those before and it was hanging right over the sky line of Philly. It was rad. The show was killer, we just so stoked to be playing such a cool stage as the sun was setting. Halfway through Nature sure enough, Jesse wandered on and started playing along. It was so cool. We broke it right down to nothing again and we were all standing around Mikey’s kit, Jesse and all. We we talking between each other, saying how long we should have it broken down for before we kicked it back up. I love doing that, it’s such an intimate moment between us as a band and the fact Jesse was in it too this time was a mind blower. It’s cool because even though there was like 3 or 4,000 people watching, only the 4 of us were in that conversation. Jesse even was like “I’m so scared!” during it. It was funny. Then we bust it back out and blew it up. It a real moment.

Afterwards, we watched Brand New kill it from the side of stage, it was huge. Then we played some ping pong (Mike has a MEAN spin) and had the beers. All of them.

Last show in Silver Spring, Maryland today. We’re all bummed tours over, but still, we get to play tonight so we’re pumped.

Big love to all the BN crew and gang. 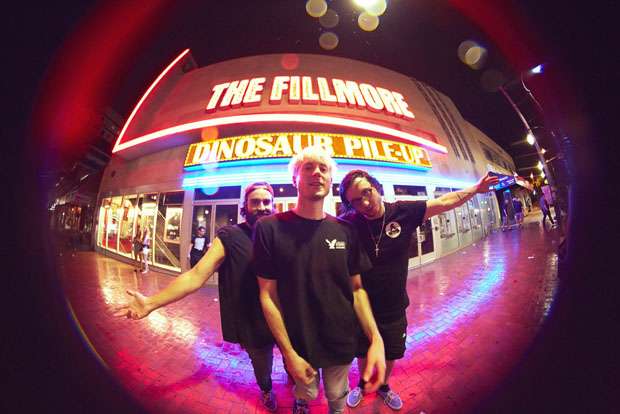