Sundressed have embarked on their “Let’s Try This Again” Tour (see dates below), and we’re proud to partner with the band to host a tour diary as they progress through their travels. Check out the third entry below, and stay tuned for more. Be sure to check them out if they’re coming to a city near you, and read all previous tour diary entries here.

We have been booked in Denver 4 times, but had only played there once before last week. Weather, getting our stuff stolen and other factors have always kept us from actually making it to Denver. This time, we were sure we were going to make it , and then, with about two hours to go, we hear a huge BOOM on the back of our van…. Turns out what happened was that the fender of our trailer ripped off , took all the tread off our trailer tire, and smacked a big dent in the back of our van. Just our luck! This is Sunday btw, so nothing is open. We managed to putt to a truck stop without the tire popping. Turns out the spare that came with the trailer was the wrong size, so we were screwed. Just when we thought we had  no other option but to drop our trailer and shove everything in the van, an old man walked up and said “Do you boys need a tire? my friend has a tire shop about 7 miles down the road, let me give him a call….” Sure enough, we drove down to this tire shop in nowhere Colorado and there he was. I felt like we were in a time warp walking into this shop. Old trinkets and ’60s memorabilia were everywhere. This man was able to give us a used tire and send us on our way. We made it to Denver!

After being in the midwest, for 5 days , it was nice to finally get back to a more western state. The midwest is mostly new territory to us, so the shows were tough, not to mention the humidity. We felt energized as soon as we pulled into Denver. Of course we had already secured our free meal at Illegal Pete’s through their starving artist program, so we went there first, since we were starving. Illegal Pete’s always delivers! After that we had to rush to load in at the Larimer Lounge, since the tire situation had taken so long, we were running late. Once we were loaded in, the guys that enjoy the recreational pot went off to enjoy its legality. I’ve never seen Forest move so fast haha… The show was a late show to attempt to compete with the fact that Warped tour was also in Denver today. The crowd we had was small, yet engaging, and Larimer Lounge had one of the best on-stage mixes we’ve had on tour.

The thing about touring this part of the country that sucks is the drives. It’s difficult to start a tour when every day is a 7-8 hour drive, but we keep doing it because it gets a little better every time. We would have love to explore Denver more, but,  we had to get to SLC before 7 to pick up a box of T-shirts from a UPS store before getting to our show. We made it with ten minutes to spare! We played a gigantic room in Salt Lake City to a pretty small crowd, however, SLC may have been our best crowd yet. Even if its just a few people, it’s a pretty crazy feeling to see someone in a different state screaming every word to your songs right back to you. It’s those little things that remind me why I do this. That thirty minutes a night on stage is what makes everything worth it.

From SLC we hit Boise for a super fun house show, and then finally head to the coast! On our way to Washington , The I90 was closed due to a Semi crash and an Ammonia spill! Yikes! We managed to figure out an alternative route that sent us through Mount Ranier and it was the most beautiful drive we have ever been on. Even though we were running a little late, we had to stop and take some pictures. Our show in Tacoma was great, we played with Quieter and The Home Team, who were both excellent bands. I had actually known Ryan from the Home team and TJ from Quieter for quite a while, so it was great to reunite and rock a gig together. The venue had a green from with N64, and a super nice stage. DIY tour’s are always interesting because you can go from a dirty basement to a nice sound treated from from one state to the next. We got to stay with an old friend of mine from high school who was an amazing host.

All along the while, I had been going back and forth with my friend Delaney who was booking our Portland show for 8/5 (Friday). Portland has an amazing DIY scene right now, but there just aren’t many spaces to throw shows in unfortunately. Our venue had cancelled last minute and Delaney was desperately trying to find another spot for the show. When it came down to it, our best bet was a house in Beaverton, OR on thursday night, so we went for it. Even with the last minute change of days, this show was awesome. We got to play with Glacier Veins again, and they were so incredible. Malia is an amazing song writer. Listen to Glacier Veins. LISTEN TO GLACIER VEINS! We love the northwest and we certainly did not want to leave.

We had a day off between Portland and Oakland , so we started leisurely driving down the I5, seeing how far we could go before we had to sleep. My friend Allen reached out and offered his place in Grants Pass, OR , Which ended up being a perfect halfway point. Allen has travelled the world hopping trains, touring, and exploring, so he understood more than anyone and really took care of us. If you’re reading this, we love you man!

Our next show was in Oakland with Pity Party and Mom Jeans. This was our second show of tour where we had warped tour in close proximity, and we really felt it this time. The show was pretty small, but it was fun to see our friends in Pity Party and Mom Jeans! We were very glad to be headed away from the festival circuit and on to Fresno. Fresno is a super small town, so we weren’t expecting too much, but we ended up having a really cool experience. Right as we pulled up, there was a dad waiting at the venue that asked “Are you guys Sundressed? My daughter loves you guys so we came early”. At this level of touring , that kind of thing is pretty rare, and a really incredible feeling when it happens. This girl made us all bracelets and was so excited to meet us. We couldn’t believe our music had reached someone at that level and it was a really amazing feeling. At the end of the show, her dad thanked us for making her day. We were energized and filled up by this experience. It was also Michael from Daisyhead’s birthday. Happy Birthday ya weasel!

So many people ask me how I can handle being in a different city every night, dealing with so much uncertainty. They ask if I get tired, discouraged, scared… and the answer is yes, Sometimes I feel like I’m in a constant state of worry. What I can’t get some people to understand is, touring is what I need to do to be okay. My sober friends think I’m crazy for putting myself in a position where I’m around substances all the time, but when I’m on the road, I’m truly free from my past addiction. We are barely making it, but i wouldn’t have it any other way. 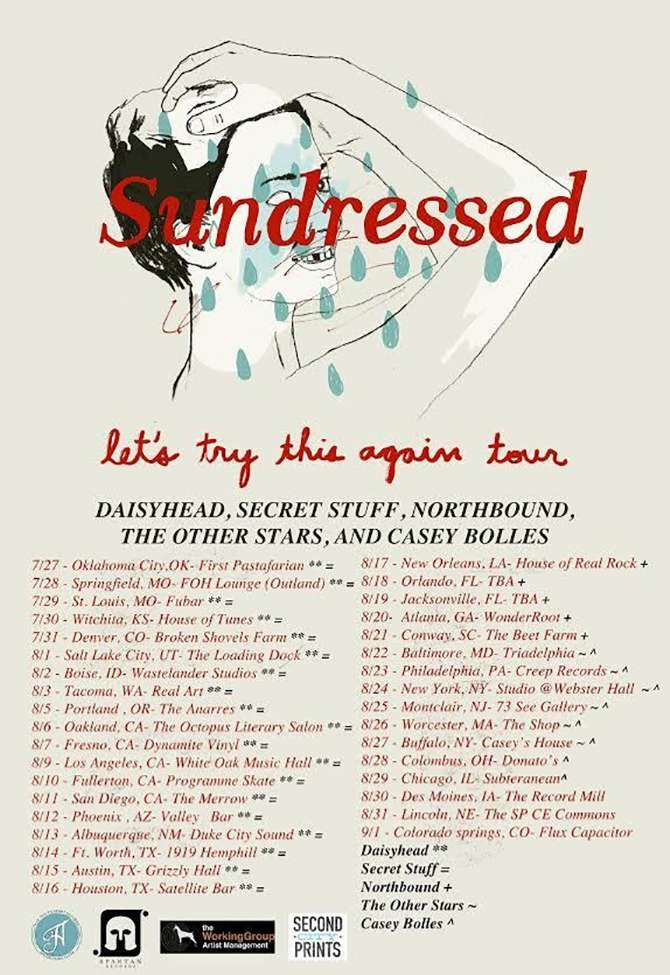 PrevHenrietta Tour Diary #4
Helping YOU Prepare For This Is My Fest 3: Sam King of Get DeadNext