Track-By-Track: Canvas – “No Love, No Hope, No Future”

Self-styled as ‘music for misery,’ quintet Canvas pride themselves on having built up a formidable reputation on their own steam, solidifying a fervent following in the UK and European underground scenes. “The phrase ‘hardest working band…’ is put out there a lot, but we definitely put a lot of work in to touring and keeping busy,” states vocalist Jack Rodgers. Taking a break from their throbbing touring calendar in August of 2013, Canvas entered the studio with producer Ed Sokolowski to record their debut No Love, No Hope, No Future. Finally due for release on October 20th, via Transcend Music (Dead Harts, Heights, Liferuiner), ‘No Love…’ is down-tempo and mournful, weighty in both sound and subject matter. Here Vocalist Jack guides us through the album, track-by-track… 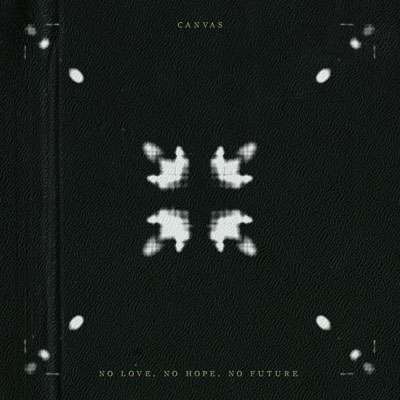 This was one of the earlier songs we wrote for the Record, I remember jamming the idea in my room with Dan one of our guitarists, he then took it home demoed the track and I laid down the vocals a couple of days later. We knew as soon as the track was finished this had to open the Album. Lyrically it’s about people moving forward and leaving you behind and feeling like you have been forgotten about. I guess the album has the same themes running throughout that touches on how I felt after I left College, with friends going to uni and getting great Jobs, I was just left at home feeling a bit useless and inadequate. ‘No Future’ is a great introduction to those feelings on the record.

We were lucky enough to write most of the album tracks together under one roof! We pretty much lived at our old bass players house for the whole of August, writing and demoing tracks. ‘Live.Exist’ was one of those songs. It’s a great opener for an album and gets it point across. The song is about finding a sense of meaning and belonging in life.

Griever is probably the darkest track on the album and one of my favourite songs to play live. It progressively gets darker towards the end and is about the thought process and downward spiral of never changing and always being the person you don’t want to be and that achieving your ideal life will never happen. ‘Life Has Killed The Dream’ Recording this was a lot of fun especially in the chorus building up the layers of strings and percussion we really went to town on it! The chorus needed to just sound HUGE!

This song is about believing you have been born cursed/un-lucky and no matter what you do in life you will never succeed. Just trapped in some horrible circle of bad luck and failure. I have the worst luck in everything and I’m always that guy who gets so close to achieving something but never quite succeeds. I guess this is a tribute to my bad luck [laughs].

This is the only ‘clean’ song on the record and is about living and repeating the same day over and over again. ‘Meaningless days turn into darker nights, I’ll lay in bed and wait for light. To repeat the day I’ve had a thousand times, I’m getting bored of life’ There were a couple of months leading up to writing this record were I had just left college and all I would do is wake up, watch TV, go to bed. It was so depressing and bleak, I had Nothing changing in my life and nothing left to look forward to.

We wrote Respite after ‘Nothing Left’ and ‘Tarot’ were complete. This is the only instrumental track on the record and links the two songs together really well.

I think Tarot is the fastest song we have ever written! We have never been a fast song band; it never seemed to fit our mood or vibe, But when Chris our other guitarist had the idea of Tarot it seemed to fit with the whole album really well, It breaks the album up and keeps it interesting I think. There are also my favourite lyrics of the whole album in this song during the clean part at the end. ‘As I stare into my future I hoped I would see you there, Except I saw nothing, No love to hold me there. So I stepped back into my past to remember the best years. But I couldn’t youth was dead, And right now I’m so scared of what lies ahead’ This song is all about Worrying about what sort of life you are going to lead in the future and realising you’re not a kid anymore and that you need to grow up.

Eulogy was the last song we wrote for the album and probably one of my favourite tracks on the record, lyrically it’s about looking back on the last few years of my life and how I would change things and do things differently if I were to do them again. Recording this track was loads of fun! Because it was the last track we wrote before hitting the studio we didn’t really have the chance to demo it probably, we had a rough demo but nothing polished or complete. So seeing that track come to life and take shape in the studio was amazing!

This is the longest song on the album and probably the most ‘Epic’ it’s a conclusion to all the themes running throughout the record and builds up and up into this big wall of noise until it cuts dead. The idea behind this is that each layer of vocal or noise/feedback towards the end is representing each feeling I have felt throughout the tracks on the album, all my thoughts and worry’s piling up on top of each other until it gets unbearable and has to end. I think it’s a very unique way of ending an album and I am really happy with the outcome!

A dark ending, we wanted to have an ending to the album that has impact but was a bit different, Hopefully this does the trick.

Purchase No Love, No Hope, No Future here: http://transcendmusic.bigcartel.com/