Politically charged mathcore band FERO LUX released their sophomore album No Rest on March 25th, engineered at Iceman Studios in West Palm Beach Florida by Daniel Colombo and produced by the band themselves.

“This album most accurately represents this band in my opinion,” says guitarist David Paul. “Our politics and social issues are embodied in this album’s music and lyrics. It portrays our passion for music, compassion for the world, and disdain for oligarchy and greed.”

Lyrically Speaking with FERO LUX: A track by track breakdown of the new album No Rest with singer/frontman Victor Skamiera… 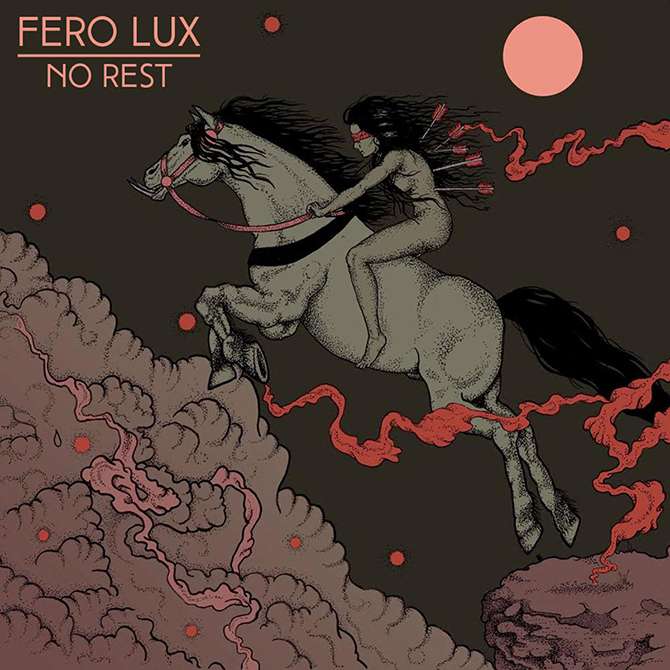 “No Insignia” is an anti-fascism song. Simply put, Russia was invading surrounding countries in 2013. Simultaneously committing war crimes. Thousands of people lost their lives. Pride in one’s country over anything else is a terrifying thing.

Side note: There is also a music video for this song shot by our friend Steven Vazquez. He’s a pretty swell guy.

A building in Bangladesh fell a few years back. It was a sweatshop. 1,130 people who make the clothing we wear died. Do you remember that? Did you even hear about that? Exactly. No Headline.

Side note: This song is old as hell, one of the first tracks from No Rest to be finished, lyrics and all.

I used to ride my bike all over and I’d run into this homeless man in a wheelchair who carried around a memoir of sorts that he called “This Is Not the Heart.” He said he called Fort Lauderdale, “the heart.” Some of the lyrics are things he’s said to me that I elaborated on a bit. I haven’t seen that dude in a while. Hope he’s alright.

Musical note: This is the first song to have saxophone or any other instrument on it other than the typical guitar, bass, percussion model. …Oh! Except for the original “Split” version of “The Devil,” I guess. That had on it this…crazy suitcase-piano-Wurlitzer-thing that we found in the studio. But sax was totally new for this album.

Simply put, we all wear a mask. We all have things in our lives that no one will ever get out of us. No matter how close we get to them. It’ll eventually cause a strain on any relationship, romantic or not. We’re all doomed.

Side note: Two members of our friends band, The Thieving Hand, did vocals on this song with us! Listen carefully, my friends!

Doubleghost is about the fallacy of entrusting one person with all of our faith, whether it be religiously or politically. We’re all in this together and there is no one person who will dig us out of the holes we’ve made for ourselves.

We played this song live the day after we wrote it. I had NO lyrics for it whatsoever, but I wanted to call it Doubleghost from the start.

I know a handful of people I considered friends at one point who have laid their hands on other people without consent. Needless to say, I’m no longer friends with those people. There is never, ever an excuse for sexual abuse. Ever.

Side note: No means no. No is always no. If someone says “no” it means a thousand times…NO!

This song is about our reliance on capitalism and how other people have literally committed suicide during the manufacturing of the technology we carry around in our pockets. But the matter is even worse than that – worse than death. We had seen articles about factories in China and other sweat-labor countries where the owners had put up nets around their factories, nets to catch workers if they should try to throw themselves off the building. Even when you’ve lost everything, when you have absolutely nothing, you retain the right to die…well…that can be taken away too. But we still buy the phones and clothes, right?

The song is kind of a cynical remark on how anarchy and the communal concern for life must really be dead since we’re constantly stepping on others to “improve” the trivial aspects of our personal and social lives.

Production note: I always knew what I wanted this song to be about, but since we never really experimented with this one live, I didn’t finish the lyrics until the morning of recording vocals for it. I have a bad habit of procrastinating.

“The Devil” is about feeling like you’ve not done your part, and you’ve become something you hate. Some people will be content with not doing their part, those people are the devil. And they love it.

Production note: We recorded this on a split record we put out about three whole years ago. On that version there is some tambourine action that we left out this time around. And that Wurlitzer-thing. Go check out that version too!

9. Everything Beautiful Is Behind You

In Turkey, a few years back, citizens were unfolding a revolution against their government for violating their democratic rights in some fashions not too dissimilar to how we in the United States have been stifled. It’s not an apples to apples, but it got me thinking, “Would anyone I know begin a revolution or even join one? Would anyone I know stand against our government if things get any worse here?”

The title of this song refers to having to fight oppression to live any sort of normal life, and how hard that must be to put everything you knew behind you. I didn’t know how to convey that thought into a song title, but figured it out while listening to the band Grandaddy. They have a song called “Everything Beautiful Is Far Away”, so I kinda LUX-ified it.

This song is about police brutality and the loss of so many innocent people, particularly people of color in America due to racial inequality. For fuck’s sake, there are members of the KKK on police forces HERE in Florida.

This song is a bit of a story. David wrote these lyrics depicting a gay couple who are unfortunately coming to terms with the fact that people want to harm them. You can piece together the narrative. But, it’s based on the anti-gay and queer attacks that have been happening in Europe, specifically Russia, the past few years – though these attacks certainly, and again unfortunately, happen all over the world.

Side note: This is the only FERO LUX song to have no vocals by myself on it. On this track, I played the swelling saxophone lead on the second half only.

This is, of course, a personal song. It’s simply about losing someone’s trust and losing someone close to you because of it. It’s a very time relevant song.

Side note: Again, I reference the band Grandaddy in this song. “We’d diffuse bombs, we’d walk marathons, we’d take on whatever together” is a lyric by that band that has meant so much to me through my adult life, so I decided to sort of “pay homage” to that.

Purchase No Rest here, and stream it in full below.