“Creative musicians are born with a huge hole in their being, which can only be satisfied by being understood through their music,” muses Margarita (aka Maggie), vocalist of rising London quartet Heel. Supercharged by this hardwired urge for musical catharsis, Heel have spent last year tirelessly touring their self-titled debut release, cementing an international fanbase in the process- 2013 saw their touring schedule incorporate a successful headline tour of Japan. Ahead of the release of new EP ‘Stranger Just The Same’ on the 28th July, produced by Justin Hill, Margarita and Guitarist Dan bear all in this track by track… 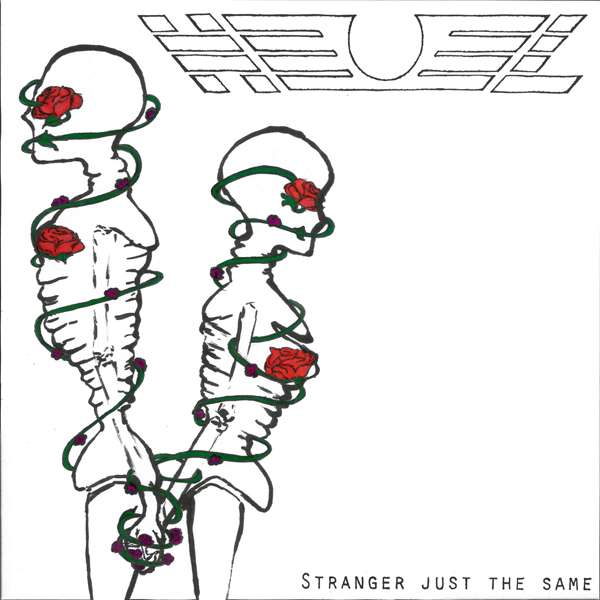 Margarita: Approaching this record, our only concern was picking the best songs and ensuring we were happy with how they were sounding before we hit the studio. We never really think about production or our sound, we just write the songs well in advance and play them live a lot. It’s so important to us to let them breathe, see what works, tweak them together and let that dictate what follows in the studio. We want our records to be a eflection sonically of what we are: one bassist, one drummer, one guitarist and one singer. We don’t want to be one of those bands that sounds nothing like the record, nor a Karaoke band where someone’s MacBook is doing all the heavy lifting!

Dan: We just got in there, laid it all out there and let Justin do his thing!

Dan: This track is about the walls we sometimes put up in our relationships so we don’t have to expose our vulnerability. I recall one break-up where a girl told me she felt like she never knew me and that she knew a part of me, but nothing that really mattered. That always kind of stuck with me and when I told Maggie, I think it resonated.

Margarita: I agree, it’s a feeling I’ve had directed at me too many times! We started trying to understand it and wrote the lyrics from the outside looking in at ourselves, which can be pretty damn hard when you were as much of a prick as I was in the past [laughs].

When we recorded it we wanted to keep the dynamics of the verse and Chorus as much as possible. We wanted the contrast of the vulnerable soft verses and the angry and frantic chorus and bridge. I think the energy of the track is exactly where we wanted it to be.

Dan: The only formal music training I ever had was a couple of years of Jazz lessons and I’ve always liked to use that Harmony in our music. I love the way it meshes with a punky vibe, so I started palm muting a bunch of Jazz chords and let it evolve from there.

Margarita: We wrote this song the same night as Stranger. Following on from that theme, I had a couple of lines I’d written that really seemed to be the flip side that concept. Gone was ultimately written about using the hopeful lust of another as a way of controlling a relationship.

Dan: Exactly. You’ll never show your weakness as long as you’re pulling all the strings. The song is about exploiting somebody else’s emotions in order to hide from your own.

Dan: We made a couple of little tweaks in the production that had a big impact on the end result. We’d been doing a half time thing after the chorus live and it just didn’t translate the same to record, so we went the opposite way. Justin also did a great job putting in swells and bits of dub to dirty up the tone of the track. It was written to be a grimy, in-your-face track and I think that comes across on the EP.

Dan: This song means a lot to me, maybe more than any of the others, as the first half verse sums up my feelings in almost every relationship I’ve ever had: an intense, co-dependent need to be better, for the sake of the people around me. I showed it to Maggie and I think she knew it too. The song is very much about hoping for redemption and trying to convince people who may have given up on you that the future is ours to make.

Margarita: Yeah I think we’ve all been there to some extent, there’s nothing harder than seeing someone lose their faith. The song is about letting go of all the bad and building something better from what remains.

Dan: To keep away from that pejorative term, I like to classify this song as a ‘Hard Ballad’, as it has all of the sensitivity but with an edge. Maggie had the idea of doing big sparse drum flams from the first beat and I think it paid off. I love how it developed. We had a really clear vision of what we wanted for this song going in and I really feel like we nailed it.

Margarita: It is probably the most compartmentalised track we’ve ever written: I wrote the first verse and chorus, showed them to Dan, who wrote the music and second verse, before we got together again to write the bridge section and work out the structure. I just had an idea, shared it, and the rest just kinda happened.

Dan: Totally. Maggie and I are like family, so this was one of those occasions where I knew the story as soon as I started to read the lyrics.

Margarita: I got really emotional and choked up singing this in the studio. Dan and I grew up in small, close families that had to deal with more than any family should. It’s probably one of the reasons why we’re usually on the same level. This song is about trying to separate from a family like that as you grow older and the resistance that comes from both sides, albeit in different ways.

Dan: I think when bad shit happens, people naturally band-together and push the outside world away, in an attempt to feel safe when life has become horribly unpredictable. Growing up in that environment you make a decision to either stay closed off and safe the rest of your life or open up and separate. Trying to do that without being hurtful to those you love is what we were trying to express in this song.

Margarita: As a result, we wanted this song to sound angry but contemplative at the same time. Dropping down the energy in the middle of the last two choruses was something we had to sell to Justin, but it was an important device to reflect those moments of clarity that come out of the anger.

Dan: Yes, I’d say the content of the lyrics dictated a different approach in production so we just went with it. I really love the dynamic swings and I think it allows the sound of this track to go an emotional journey. In fact, that mirroring of sound and emotion was incredibly important to us across the whole EP.

Margarita: That’s right. We don’t want reading our lyrics to be an essential part of understanding the feelings the songs are aiming to communicate. We experience the music we love as one big entity that encapsulates everything at once and we hope people can connect with our music in the same way!