Liam Edwards, vocalist with Bristolian pop punks Highlives, reflects the inspiration behind his band’s new 5 track EP Misguided Youth: “We’re often misguided through our younger years, and our lyrics reflect on that a lot, focusing on how it feels to see younger people go through the same situations, and having to make the same life choices that you once had to. It’s easy to become lost amongst the various situations that are thrown at you in life, and the decisions that you’re forced to make.” This contrast between both the hopefulness and challenges of youth greatly inform Highlives’ music, their effervescent pop punk shot through with melancholy. Here they give you an insight into what to expect, how writing and recording went down and their thoughts on the outcome, track by track… 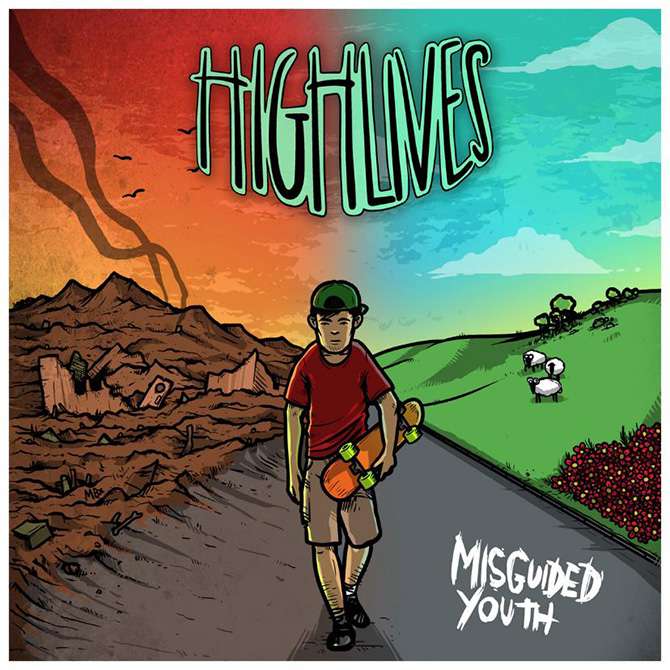 Ben: A heavier sounding track than anything we have done before, but a lot tighter and catchier. In my opinion it is one of our best tracks. It was written the first time we met Nolly, by us all bouncing ideas off of each other to get a rough version of it with no vocals. The next week I took the lyrics from an old demo that we had recorded, rearranged them and incorporated them into the new demo. Liam came over a few times and we practiced and rearranged it some more. The week after we had demoed the music, me and Liam went back Nolly’s to record the vocals.

I’m incredibly pleased with how it turned out – it’s such a catchy song with some great hooks that get stuck in my head for weeks! It’s a lot of fun to play live and it’s more complicated than a lot of our old stuff, but that just adds to the fun!

Liam: Wake Me Up was weird one. It was a song which we demoed twice, both with very different music and ideas thrown in before creating the final composition. As a result it combines several different lyrics originally intended for different songs and a lot of the time this wouldn’t work as it would cause the song to not make sense, however in this case I think it works very well.

The song describes from a personal perspective, what it feels like to go through the motions of your everyday life and not feel like you’re making progress. This feeling is portrayed in such a way that it is compared to the feeling of a hangover. The song goes through the motions of a hangover in the same way in which someone may try and pull themselves out of a bad routine. It starts by describing the initial feelings that someone who has found themselves in a bad situation may have; feeling apathetic and regretting the decisions which they have previously made. The second verse then goes on to describe a struggle, yet it is written from an optimistic point of view, which implies that there is an intention to break free of the weight that is holding them down. It is then rounded off by a reflection on the past, whilst describing intentions held for the future “Forget all the days that I spent chasing ghosts down dead ends”. This line describes letting go of the past and no longer letting it hold you back, allowing you to move forward. The chorus which repeats three times throughout the song touches on the idea that once you get into this state, you may find yourself relying on others for help. The lyric in the middle eight “I’m not alright, I’m barely okay. I’m so sick of this feeling day after day” Is something that Ben contributed and I think sums up the concept of the whole song very well.

Ben:  Heavy Weight is more punk sounding than a lot of our stuff, with no vocal harmonies and more of a raw feel to it. It has the chords from an old demo which our ex-guitarist had written, that we figured Liam’s lyrics and melodies worked well over. I wrote the intro hook and we were done. We didn’t want to add too much to this one as we wanted it to keep it’s punkier feel.

The lyrics talk about feeling a lot of pressure to impress everyone, and be the person everyone expects you to be rather than yourself. I started out not being much of a fan of this one, but after we started playing it live I’ve started to like it more and more! It’s always been fun to play live as it’s so short and simple, but it’s been 100% better now we’re playing with two guitarists! I never realised how much the guitar harmonies add to it until we played them live.

Liam: Heavy Weight describes what it’s like to have built up your walls so high in order to protect yourself from getting hurt, but as a result of this you’ve created a false identity that people around you perceive you as your own, when this isn’t necessarily how you actually are inside. I think that people will often present themselves as a different character to their own, in order to create a false sense of strength and hide their weaknesses.

Ben: This song is a lot calmer track than the rest, a lot slower and more chilled out, but still has catchy vocals and music. Probably the one song that we have which may be closer to the ‘pop’ than the ‘punk’. This one probably took the longest to write. We always talk about having a slow song but it just never came about, so me and Liam knuckled down to make it happen. It went through a lot of weird changes during the writing process, with the funniest probably being Steve’s honky tonk sounding drums programmed over some really country sounding picked guitar on the last demo before we took it to Nolly. It went through a lot more changes during the actual recording of it, but it was for the best as it changed from a weird country/punk song to the song that it is now. It’s a song about becoming an adult and trying to make good choices along the way. I love that the crazy pop melodies work so well over the layers of powerful pop punk guitars, bass and drums.

Liam: The song talks about questioning your own decisions, and whether you should have done things differently. “Is this the right path for me to choose, to be in debt at twenty two?” refers to making sacrifices in order to do what you love, but at the same time taking a risk, as you can never be certain that you will find success in what you are working towards. This relates to being in a band, as well as being in education, some things that I think a lot of people in their early twenties will be able to relate to. It talks about becoming so caught up with things in your own life, that you become selfish and begin to devote less time to the people you care about. Something that I think happens to everyone at certain points during their lives, and whilst it is usually unintentional, can result in you feeling very distant from things you were once close to.

Ben: It is a cheesy up beat pop punk song, similar to Through Vacant Eyes in a way, which was also written in the same style. Me and Liam were in my room and within 30 minutes we had the whole song written. We seem to excel at writing songs like this, and they always seem to turn out just as cheesy! It took a couple of demos to perfect some of the instrumental parts, but the majority was done in about 30 minutes.

It’s a song about choosing the right path in life, whilst trying to make up for mistakes that you have made and choices you regret. I love playing this song live. It’s simple, cheesy, and so much fun!

Liam: Walking Blind is a song about making too many mistakes, and losing faith in yourself to succeed in the future. It touches on jumping into opportunities and moving through the stages too fast, oblivious to the dangers and obstacles involved, and as a result of that, finding yourself back where you began.

Ben: It has fast paced verses with slow chorus and an epic outro. Liam sent me some lyrics over and I recorded a few vids on my mac with an unplugged acoustic guitar. I changed the chords around a bit and Liam edited the lyrics, but as we didn’t have any time to demo it before heading into the studio, we just had to bring a Photo Booth recording of us playing it acoustically to Nolly’s. I played a guide track and we went from there for recording it. We added a lot of layers and added some lead guitar into the outro. It went from being a song that no one really got but me and Liam, to being the lead single on our EP.

Liam: Better Days is a song which initially drew the inspiration for the title of our EP ‘Misguided Youth’. We recently released the video, which follows a young homeless boy on a journey through his everyday routine, during which he encounters both good and bad people. The song is about how easy it is to get drawn into bad situations through your younger years, and the line ‘truth is, we’ve all seen better days’ plays as a reassurance that everyone experiences this at some point in their lives, and that no one is experiencing them alone. In the video, the boy comes in contact with the wrong person and gets himself into trouble. However, towards the end he is saved by a man, who’s day is also portrayed in the video. This symbolises the fact that everything will be okay in the end. The man is a successful character, who’s life is compared to the boy’s throughout the video. The song touches on what it’s like to see people close to you push through the struggles of growing up, as well as reflecting on personal experiences.

Misguided Youth will be available free on December 11th at highlives.bandcamp.com

PrevRetro Action #11: James Ray Reissues and More Bands of Yore
Tour Diary: Like Mike Give Us A Glimpse Into Life On The RoadNext