Track-By-Track: Forever After – “Just Another Year”

Inspired by a plethora of musical backgrounds, Forever After have spiced newly released EP Just Another Year with suitable diversity. “We all have different influences, from grunge to folk, blues to pop punk and metal. So, we wanted to write a EP that we felt had a little bit of each influence in it,” says vocalist Dom Littler. Indeed, from the aching 90s nostalgia of lead track “Inhaling, Falling” to the riff infused punk of “Miles Away” and the grungey pop rock of the title track, Just Another Year is buoyantly reflective of the band’s broad palette. The Essex lads additionally describe themselves as having “British geezer vocals”! Following the release of the EP on Monday the 25th, Dom guides you through it track by track now… 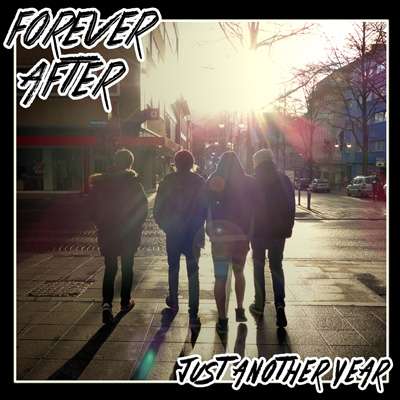 “When we started writing this new EP Dom, Sam & Harry had all started new jobs, so there was a lot of struggle when it came to all getting together and writing. Sam & Harry also had relationship troubles on the horizon, which later lead to break ups. This is what our new EP is mostly about.

We finished this track the day before we went into the recording studio, so it was a massive rush, but I think it was a risk that payed off! I wrote the lyrics about Harry’s (Bass/Vocals) relationship with his ex-girlfriend, who left him earlier in the year. I watched him fall apart and it was horrible, I was so sorry for him and it inspired the lyrics for the Chorus “I’m so sorry, Shes leaving this town.”

We wrote Miles Away earlier in the year, but didn’t get around to adding lyrics until later. We wanted to add a more punky feel to this track with the drums being up beat and fast! I wrote the lyrics about starting a new job, one of his closest friends going travailing to Australia, and a couple of other friends moving out to new cities or Unis. The line ‘Just another year’ in the chorus is also the title of the EP, as it is relevant to everything that has happened in the last year and also how long it took for us to write and record the new EP!

Harry came up with the main riff on guitar and we loved the sound, so 90’s grunge. I wrote the lyrics about my addiction to sugar and my bad habits. It was shortly after the New Years and I had rapidly failed at all of my New Year’s resolutions: Stop Biting my nails, Smoking, Cutting down on sugar!

Harry wrote all the guitar parts, he has a very metal background and so we decided to spice things up a bit. I wrote the lyrics about a couple arguing, who always put the blame on each other… basically I was watching too much Jeremy Kyle that day.

I wrote this song about my Girlfriend, who I met in September 2012, while out for my friend’s birthday. I thought she was leading me on and that I had no chance with her but after I gave her my chair we sat together chatting all night, one thing lead to another and.. yeah! I remember showing her the demo for the first time and being so nervous/embarrassed, but she loved it, and now I get to embarrass her at every gig of ours she attends.

PrevTrack-By-Track: The Hiding Place – So This Is Home EP
Film Spotlight: Deep Beneath Our Feet Lies A Nightmare… ’12 Kilometers’ Deep.Next