The Kut’s latest milestone is new EP, Rock Paper Scissors and it sees the trio – vocalist Princess Maha, drummer Violet Cannibal and bassist/vocalist Alison Wood – taking a more stripped back, visceral approach toward their Riot Grrrl tainted alt-rock. Twinkling guitars, accompanied by harsh growls and contrastingly sweet melodies. “[2014 E.P] ‘Make Up’ was a transition record; we vented a lot of frustration on that, but it was overwhelming rather than empowering,” recalls Maha; “By the time it came to recording Rock Paper Scissors, our frustrations were transforming into something more constructive. The new music is very angry, but that’s sometimes the process that’s needed.”

Rock Paper Scissors is set for release on April 13th via Criminal Records. Here Maha guides us through the EP, track by track… 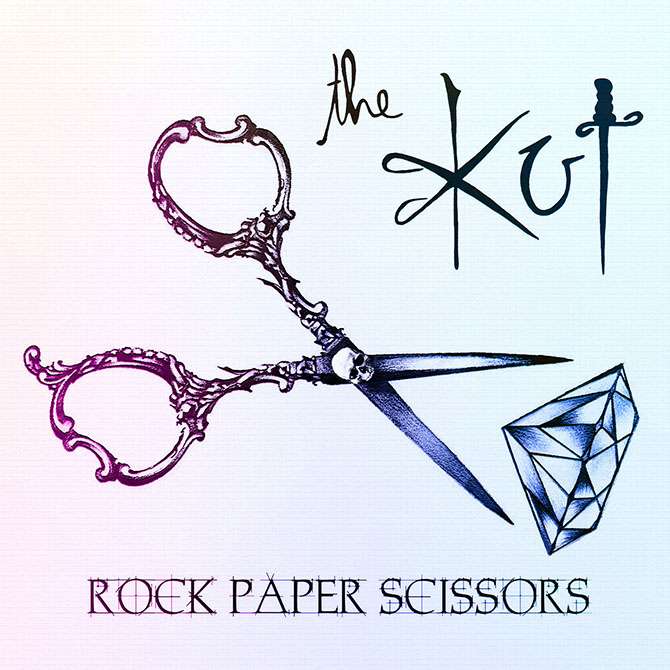 Our last EP, Make Up, was a transition record in many ways. We’d been out of the scene for a while without even realising, just surviving off gigs and thinking that was enough. It was a messy time, and in the process we deleted our debut EP Poisonest. We were frustrated and fed up with people making promises they couldn’t deliver on, or trying to rip us off. Make Up was the surface of some of those emotions and the tracks “Mario” and “No Trace” were the peak of those tensions.

In a way though, it wasn’t our complete sound. When the EP came out it needed us to take a step back before we realised we’d put out what essentially was really dissimilar to what we play at the shows. Sure, we love those tracks and they all sit really well in our set, because they are emotive and powerful in what they mean and the feelings they represent. But that wasn’t really the full picture.

Rock Paper Scissors was our way of readjusting. It was more upbeat and raw. We aren’t a one genre band and we’ve always thought our set works the way it does because of the contrasts. I mean, who wants to listen to essentially the same song 13 times in a show? We just wanted to put something out that represented who we are as an actively gigging band. It was always about the gig for us, that’s where people tend to get us.

I wrote I Want You Maniac just messing about at mine the week before we were going in to record or thereabouts. It wasn’t one of the tracks we were going to lay down because it wasn’t even a track yet, but sometimes I like to do that and write another one when I know we have recording booked in. Kind of like, a reason to write more. We loved working with James LeRock Loughrey on the majority of the ‘Make Up’ EP. He got exactly where we were going with it and we were excited to go back to the studio with him at The Tilehouse. It was funny though because the girls had never actually heard the track. I put down a guitar guide and we took it to the studio incase we had more time after the drums were recorded. As it happened Violet smashed her recording in one or two takes per track and there was loads of time. I nipped off to the shop and by the time I got back the drums were down ! They fitted perfectly and then I added vocals, again which no-one had heard. I made the guitar solo up there and then and James used that take, which was pretty funny really. After this Ali put the bass down and it was a track. It’s one of the ones we love playing live now too.

The riff for Alekhine’s Gun was one that had been running in my head for a while. I wanted it to go somewhere empowering, to help someone get through difficult times. That’s where the lyrics are from – that dark place. I guess it’s a space everyone has been and getting through it has to go through a few emotions, just like the track. We arranged it at rehearsal and it started to take shape. The bvs and harmonies smashed it. The name comes from strong chess move and it fitted with the message behind the track. The screaming was just a bonus I guess. It needed something as powerful as the meaning behind it. I still like the reactions to it when we play it out. Some friends asked me who the guy is on the record which made me laugh. Even my dad said ‘Is that you?’ and then tried to convince me to essentially join a metal band haha.

This was a fun track to write, it’s kind of catchy in that way I guess.. It’s kind of like having a birthday where everyone gets on your nerves or lets you down and you are half thinking, well what is the point of celebrating. While the other half of you is thinking, I don’t need any of you and your negativity and I’m going to have fun no matter what. It’s also about having fake advice forced down your throat, and people transparently trying to prescribe whatever it is that is better for them rather than genuinely having your interests at heart. ‘Therapy’ in the track is talking about that ‘advice’ that is not really useful. That kind of advice you didn’t ask for that you can do without.

Bad Man was such a great track to work on and it was the perfect end track for the EP. I brought it into rehearsal in a less polished form and it meant that we could mix it up a bit rather than just everyone adding their parts. Ali really pushed into it and the chorus began to evolve. It was fun and punky and live it has exactly the same feel. It’s great to jump around to and probably one of the set favourites of this era. At the moment it’s one of the last songs on the set. It’s essentially a story about a vigilante witch hunter, who recurrently sees a ghost of the past in current encounters, setting out to take revenge on a long gone bad man. Haha, doesn’t that just sound like some awful B movie description xD