Pop-Punk: just in case you missed the billboard sized memo, it’s back, hotter than ever, and it now comes in a fetching shade of British. Hot on the heels of fellow countrymen Neck Deep, ROAM, As It Is and Trash Boat, Brighton quintet Six Time Champion are making their presence felt with storming new five-tracker, Expecting Honesty. Released on the 1st December, the work is buoyant with hooks and drives its points home with fiery panache, Six Time Champion’s rougher edge reveals their boisterous live energy. Here the talk you through the forthcoming EP, track by track… 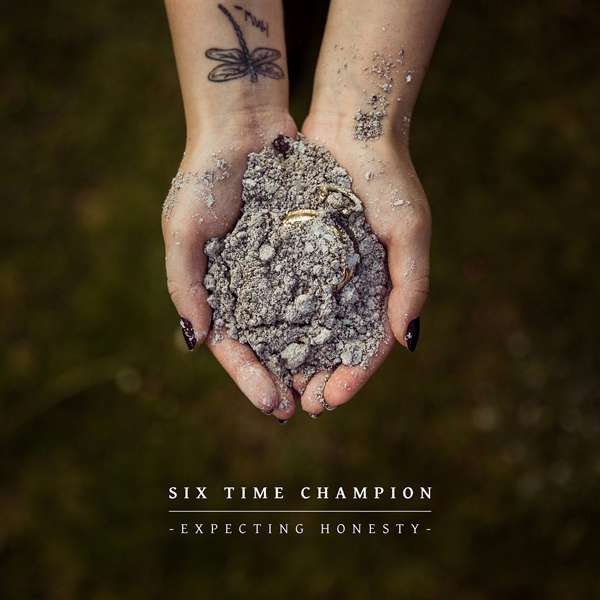 When we first began writing for Expecting Honesty we had no specific aim, other than to put together a few tracks that we could enjoy playing and performing, however as we delved further into these tracks, they started to become something so much more for us. We went for a slightly grittier, raw sound whilst still clutching to our pop punk vibe, in an effort to stay relevant whilst creating a sound that could set us apart from the rest. Safe to say the songs that started out as a bit of fun turned into something that we felt was a massive step up from anything we had written in the past, and something that we all feel extremely proud of.

“Running Dry” was initially written within just a few months of the band forming, before we had even recorded our previous e.p. We had written numerous tracks around this time, however this was the only one which really stood out to us, and after various alterations, became one of our heaviest songs. It hits hard right from the very start, and for that reason has always been our opening song for any shows we play.

The lyrics express adistaste to the busy, overwhelming lifestyle that most of us find ourselves a part of, and try to show that if we slow down once in a while, we can actually see what’s important and what truly brings positivity into our lives.

This one kinda came out of nowhere, it was one of those songs that just fell into place right from the start, the upbeat melody of the guitar gives this track an extremely catchy, uplifting vibe. The lyrics on the other hand are somewhat of a contrast, based around personal feelings towards a sense of isolation from others, that is needed to instill a positive state of mind throughout everyday life.

The title track of our e.p and our first single. This was one track that took some serious work, in fact it was chopped and changed numerous times over a good few months. We knew that it had serious potential, it was just figuring out how to obtain the fast paced aggressive sound we were aiming for, whilst still having an enjoyable song to play and perform. It wasn’t until the night before we were due to record this track that the lyrics finally came together, based around an acoustic song that I had previously been working on. The rest of the band didn’t get to hear any of the vocals until we actually recorded them in the studio. Despite the last minute approach, this song instantly became a personal favorite for us.

Lyrically this song is far more boisterous than the rest, voicing a lack of tolerance for all the pointless dishonesty in life. It pretty much sums up the entire theme of the EP.

“Dragging My Feet” initially started out as a slightly softer tune for us, but in typical “Six Time Champion” fashion, it was very quickly beefed up into something far more bouncy and upbeat. The song is based around other peoples misperception or over glorifying of who you really are as a person.

Another energetic, fast paced song full of catchy melodies and hard hitting breakdowns. This has to be one of our favorite tracks to play live. The extremely personal lyrics, are based around dealing with sudden change, and the consequences of a life long relationship becoming controlled by distance.

PrevOver The Influence: Saturn Wants To Leave Their Sonic Imprint On The World
Top Artists To See At Voodoo ExperienceNext