Though only officially founded at the start of 2014, pop-punk quintet Trash Boat have already played their first shows and recorded their debut E.P, Look Alive, which is set for release 23rd June. Bursting with buoyant guitar licks and the kind of vocal melodies you only need to hear once before they’re imprinted on your temporal lobe, Look Alive is a formidable first strike from Trash Boat’s arsenal. Here vocalist Ryan gives us some insight into the creation of the EP… 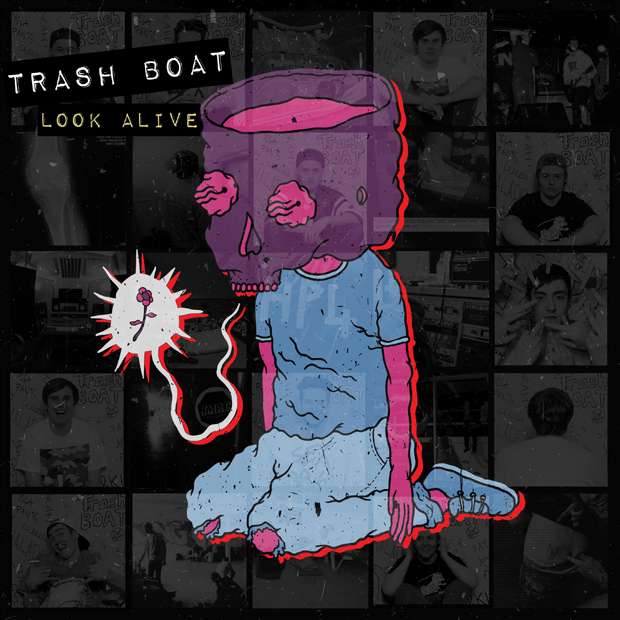 Most of the writing for the EP tracks took place in Oak’s room, we’d play around with riffs, record them on his computer and generally spend hours doing trial and error to see what sounded good. When we all went home or to work we would still be sending each other ideas we recorded on our phones and ideas for the vocals.

Every song was pretty slow to begin with, trying stuff out, binning it, repeat etc, refining it each step of the way. But once we had an idea we thought was solid for each song, it was really fun to build on and stuff started to flow. We spent a good few months ironing out creases and changing bits here and there, but once we were happy we booked our time at the Ranch House Studio and went down there to stay for the week. We smashed it out, had a cool time and we’re really pleased with how it has turned out.

“Cluttered” and “Boneless” are very similar, they use the same base when it comes to theme I just went in two different directions with it. ‘Boneless’ is very blunt and honest, it’s an insight into the previous few years of my life in which I had faced some drastic lifestyle changes due to a lot of knee surgery, stuff got pretty bleak pretty fast. I met the guys in Trash Boat right about the time I started to get my shit together and it was really fun to write about it all. The lyrics to boneless are pretty bleak but I’m not in a bad place, that’s the point of the song, I’ve grown from that and can now look back and appreciate that those experiences are why I am who I am today.

“Cluttered” uses similar elements, but it’s less macroscopic than “Boneless,” “Boneless” looks back at those experiences over the entire period, “Cluttered” is how they were effecting me in the present moment and influencing my song writing. “Gnarmalade” is my favourite track ‘cos it’s got the most energy. The lyrics came from a part of me that changed during the recovery periods; I was bedridden for a period and started boning up on social issues, activisms and the like. Everyone always has a really detailed opinion on stuff like that so I won’t go really deep into it, but it was great to be able to put that time to positive use. “Gnarmalade” (lyrically and musically) is the first of many similar Trash Boat tunes.

“Lock” in is written about an old friend of mine who I hadn’t seen in ages, he called me up one night and asked me for a lift to a mates house which I thought was weird but he seemed in a bit of a state so I said yes. Unfortunately life wasn’t going great for him and his family and friends weren’t doing him a lot of good. It made me think about how lucky I am to have such a cool group of friends and supportive family around me, most likely the main reason I’m doing so well today and able to reflect on things with a clear and happy head.

Playing this EP live is what it’s all about, and I can’t think of anything more fun, we get a really good crowd participation thing going, with “Boneless” especially. I can’t wait to take it on tour and play to as many people as possible!

PrevMemories of Punk Rock Bowling with Fat Wreck Chords
For The Record #1: Signals Midwest, The Mighty Fine and FrameworksNext