Detroit based four-piece Citizen Zero recently signed to Wind-up Records (Filter, Crobot, etc.) and have toured with acts including P.O.D and Highly Suspect. They’ve also kept busy massive festivals like Rock On The Range, Carolina Rebellion and more. Today, we’re pleased to bring you the band’s track by track for their new album State of Mind, available now on iTunes, as well as streaming. 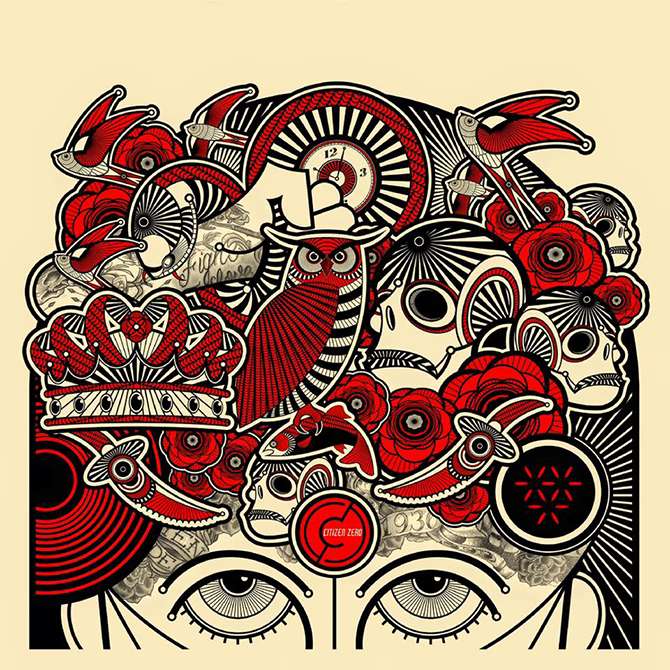 We wrote the entire song and recorded the demo all in one very, very long night. We started casually drinking early evening, just hanging out at the studio on a summer night. 10 hours later and many more drinks, we had What a Feeling.

Go is the very first song we wrote when Sammy joined the band. The original idea, which is now the opening guitar part, was written on piano. We recorded this in a little basement studio in Romeo, MI. The building is from the 1800’s and the ceilings were so short, we couldn’t walk around without crouching.

This was night number two of a three-day-studio-writing bender. We were all set up in the live-room of the studio and were just jamming and messing around. Sammy started to play the opening and chorus guitar part and John put this hypnotic driving drum part behind it. From there we built around that. Again, 10 hours later, we had Save the Queen.

I had a really crazy story to tell – that’s where this tune started. We all sat down and I pitched the lyrical content to the fellas. We started jamming the verses…real punchy with a revolving part – “and it ain’t make believe.” We wanted a tune that the chorus live would just go off!

This was the song that taught us to stay in the room. I had a 7am flight to Dallas the morning after we went to the studio to “hangout”. Started developing the idea of Come Away. Everything was coming out naturally. Right when we would finish one part of the song, we would have the next part in our heads ready to lay down. This happened hour after hour. I kept doing the math in my head – “if I leave here by 4am, I can sleep for 1 hour and head out.” When we finished the song, I made it home and to the airport with 22 minutes to spare.

We dug the hell out of this tune when it first came about. When we were recording it for the album the chorus was for some reason sounding incomplete and a little thin. An old vintage Moog synth was the body we were looking for underneath the entire track followed by the cowboy toned guitar part following each line of the chorus. THEN it sounded complete.

This idea is exactly the same as the original recording. We messed with the idea of writing a song in 6/8 time with a monster vocal extended over the chorus. The outcome – Love Let it.

Applause and Fame, at the time that we wrote it, was a rapid withdraw from the rest of the record. We really got outside our comfort zone and spent a lot of time with tones that took up a lot of sonic space. The day before this song went to our mixing engineer, Sammy and I decided we didn’t like the lead tone. We went to our rehearsal space in Pontiac, MI and recut it. We do not own a studio by any means…just a SM57 straight in to a $200 preamp and boom…the lead on Applause was perfect.

9. When the Rain Comes

This was the second song we wrote together as a band in 2010! Matt Dudley, Johnny’s older brother passed away in 2013. The idea sprouted from his iconic guitar melody that the song starts out with. We rerecorded this with Sammy for this record and couldn’t be happier how it turned out.

This tune took an almost 180 degree turn from the original demo. After listening to it tirelessly for a month, something didn’t sit right. We originally had a musical chorus without any vocal. We shifted some parts around, rerecorded it with it’s current chorus and added the big ending.

I’ve always had this fixation on writing lyrics in the car. It’s a great place to be alone. I was driving back from New Orleans and the week before, we had finished the music for Home. Took me from about Tennessee through Ohio to have the lyrics written on Chipotle napkins – coming home.

PrevHelping YOU Prepare For This Is My Fest 3: Sam King of Get Dead
Fun In The Sun Friday with SoftspokenNext