Track By Track: For A Life Unburdened – Contempt/Clarity

Alberta metalcore outfit For A Life Unburdened have recently released their debut full-length, Contempt/Clarity, and we’re excited to bring you the band’s track by track breakdown of the album.

Explosive, captivating, metalcore, with huge breakdowns and delicious melodic interjections. Spencer Sotelo and Taylor Larson were behind the controls for the recording of Contempt/Clarity, and their influence is evident throughout the accomplished record. 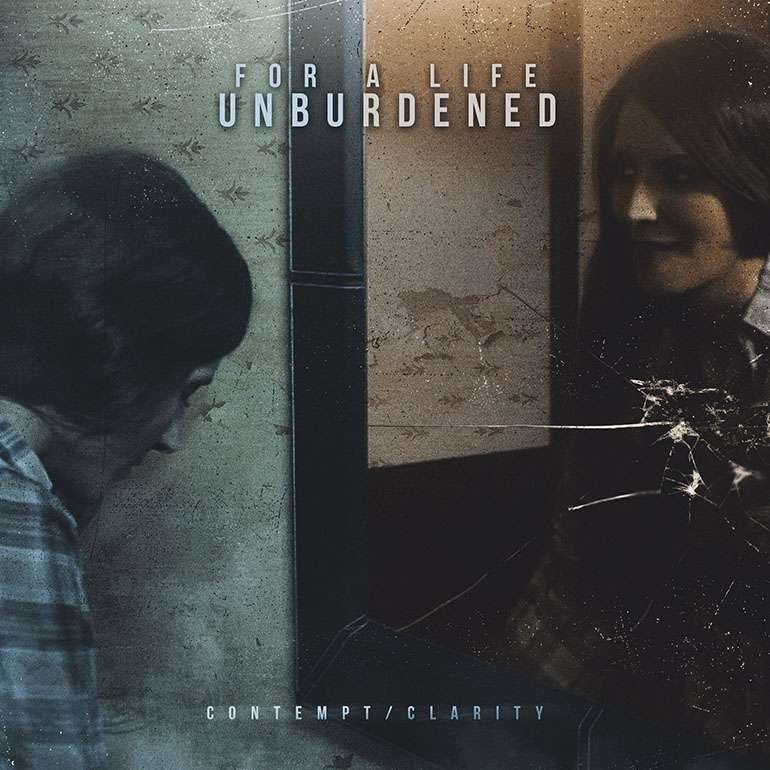 This song is just an intro to the album. It is meant to symbolize the start of the grieving process throughout the album, so I won’t go too much in to this song.

This song is interesting because the idea for the lyrics came to me after watching the film “Logan”. Wolverine is a cool character because he lives for generations and generations. While most people think it would be awesome to essentially be immortal, I thought it would be a living hell. Every single person you care about would have to die in your lifetime, you would have to deal with that grief time after time. So being that it is based on wolverine, the song was titled “Adamantium” which is the metal on the bones of the character.

We continued to record this song and re-write the lyrics so it doesn’t necessarily sound like we are talking about comic books, and make it sound like a more real life issue. It all felt a little more real when our friend actually passed away, and we could relate to the lyrics on a much deeper scale.

This song was lyrically inspired by the moments in life where a decision or fear of the future causes severe stress or anxiety. The choices don’t have to be something major like a career or drugs. The decision I faced was simply, do I do music or do I go to school. This may not sound serious, but it caused me a lot of grief and anxiety.

Of course, lyrically I had to add some stakes, so I talked to many people and got their stories about the moments that caused them stressed. It ended up being about depression, suicide, and unemployment, simply because those stories struck me as the most powerful.

Who You Think I Am

This song is definitely a bitter song, simply because it was written in a time where I thought always being angry and over reacting was a “Metal” thing to do. It was written when I was still in high school, but when we went to Taylor Larson’s studio, we decided it had potential to be re-done.

The new version focuses a lot on the idea of fairness in life. The idea that if you truly want to behave a certain way, whether it is goth, country, metal, skater, etc… That no one should ever try to change you. This was something everyone in the band has dealt with in some form or another, and I truly believe that at some point everyone on earth has also felt this way.

This song was inspired by a story I read about a Canadian soldier battling PTSD. This article was particularly interesting because he went in to great detail about the first time he ever had to take a life, and how that moment haunted him forever. He claimed to see visions of the man, and described the feeling as being trapped in hell with this man. Hence the title “Face in Hell”.

The lyrics are essentially attempting to outline the moment leading up to that moment and the feelings directly after. Now I’ve obviously never had to deal with this situation, so I watched videos, and read stories about people dealing with this moment and did my best to capture those feelings of remorse and dread.

This song is an emotionally driven tune. It is simply about the people in life who have had to face day to day challenges without a parent. I’ve known plenty of people growing up who had a father leave, or a mother abandon them by themselves, and it always pushed me towards anger. I never understood how one could completely abandon a child.

I’ve talked to many people about this issue, and the emotional and mental damage it can do is devastating. It is something I have never had to go through, so I spent a good portion of my life making sure I was always there to help the people I cared about deal with any of these issues. The lyrics emphasize a perspective of the person who has been abandoned.

This is another song that we wrote a very long time ago. We are definitely glad that Taylor and Spencer wanted to re-make this track because it turned out so epic. The lyrics are all based on a topic we covered in an abnormal psychology course about split personalities. In this course, we watched video after video of people who would switch personalities on camera.

I decided to write some new lyrics that defined one personality as more aggressive, advocating violence, lacking empathy, while creating another that is dismissive and scared. I like this dynamic because it clearly shows which one could possibly dominate and control how a person will react to the world.

This song was written right in the middle of the U.S. election. It is not meant to necessarily call the candidates blind, it is more so to mock the leaders and voters who fall victim to political strategies. These tactics such as fear, whether it be against a group of people, or perhaps a new type of disease. I’m no genius or anything, but when you watch an election that had this much coverage on the media, it is easier to see these patterns.

The lyrics are kind of made to be in the past, maybe the medieval age, or the roman empire, where a monarchy was still a thing. People didn’t really have a choice, sothey followed whoever was put on that throne. As history will tell you, there countless kings who abused that blind servitude to increase their own wealth or land. It also demonstrates that maybe these leaders don’t know the damage they may cause either, hence the title of the song.

Waiting for Us to Die

Have you ever heard the phrase when somebody dies “it was there time”? This song is entirely based on the notion that if everyone has a “time” to go, then that means we are all living with a clock on our lives. The only idea of this struck me as bizarre, and when people say it about kids who passed away with leukemia or something, I have a hard time believing that they were “supposed to go”

Now, this song is not meant to attack religion of any sort, it is simply meant to get people thinking about the idea. There lyrics in there that can definitely be attached to Christianity, but is not meant to be the focus. I want people to focus on the frightening idea that any time could be “our time”.

In the wake of the shooting of that club in Florida, we were flooded with news reports and articles about the hate people have towards certain groups in society. It is something that is very hard for me to watch, and every new generation has to be the beacon of change, the idea of a finite era of tolerance came about.

That idea is sort of confusing, in the sense that it sounds like I’m saying at some point tolerance will end. Instead I’m hoping people think about it as a cycle. Every time a generation makes advances it only goes so far, it doesn’t last forever, so it is up to the next generation to keep making improvements and eliminate this type of hate.

This is by far the most emotionally weighted song on the album. It was written directly after our friend had passed away in a tragic hit and run accident. We all grieved and dealt with it in our own way, but I had never lost anyone before. I handled it poorly, I started drinking, skipping school, and eating poorly. I essentially just stopped doing anything at all.

The song is called “Clarity” as it highlights the moment in which I realized this is not how I should be coping, and that she would be ashamed if she saw how I acted. So I picked myself up and instead tried to reach out to the others who were grieving. This is personally my favourite song and it means the world to me that I was able to get it out to the world.

PrevD.I.Y. According To Grim Deeds
Track By Track: Collington – ‘In Between’Next