The mastermind behind Orissa, David Dodini, graduated with honors from the San Francisco Conservatory of Music and completed his masters at the Biella Conservatory’s Scuola Niccolo Paganini in Biella, Italy. Orissa’s live band is a roster of NYC’s finest musicians from Trans Siberian Orchestra, Neal Morse Band, Stratospheerius, Book Of Mormon, Dyed In Grey, Haakons Fault, Emergence and Astronaut Down.

Orissa was created in 2010 by Dodini, a virtuoso singer, guitarist and bassist, who writes, ​​arranges and performs all the parts on Orissa’s records. Orissa ran a successful Kickstarter campaign that raised over $20K to fund Resurrection. Check out the track by track with David Dodini below. 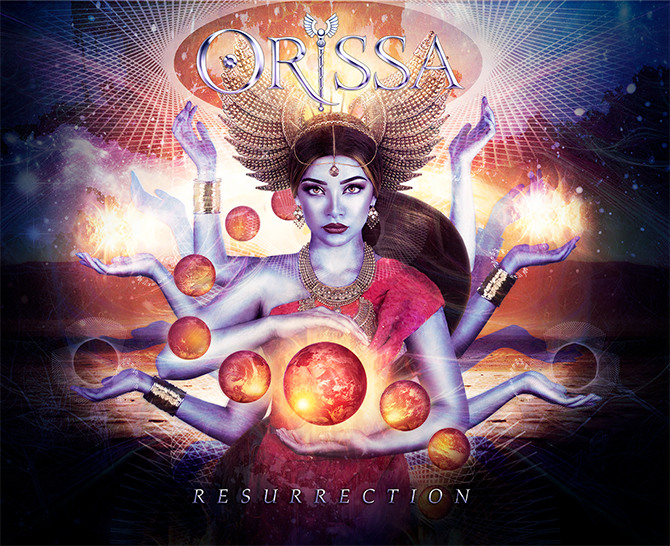 Circle X – This ambient prologue sets the opening scene from which the album departs. The gates shut and we find ourselves in a circle of one of the protagonist’s inner, self-created hells.

Tara – The album opens with a cry for mercy. The protagonist is reckoning with the cycles and patterns in his experience – and realizing they recur by choice and that his struggles and suffering are self inflicted. “Dragged down, by my hands again, to hallowed ground, where I hear self doubts confessing. A profane chorus blessing the sacred prayers of the vain and godless. Lost, drowned by the sacred sounds of my mind.”

Resurrection – This song plays with a reversal of the archetypal resurrection parable. Rather than descend to an underworld to confront the source(s) of suffering, the protagonist is aware that he is responsible for the burial of something(s) that cast a shadow on him. He resolves to unbury, confront and lift it to the light for examination, understanding and absolution.
At the song’s core lies the optimistic realization that our shadows are not to be avoided in fear or shame. Rather they prove the existence of our great light within. The climactic line in the song being: ‘All shadows live feeding on lights that glow. Your shadow proves there is a light below.’

Shades Of Grey – We live in a time of marked intellectual dishonesty. Reasoned and compassionate reflection, analysis and discourse have been supplanted with a morally self-righteous, finger pointing and blaming used to slander and silence reasoned discourse. Ironically, many who claim to be the most scientific, logical and informed are the most lost in this tragic, internal morality play we see infecting our society. This song is a call to regain a footing on the solid ground of temperance, compassion and humility. We don’t know everything. We don’t have all of the information – especially when we choose not to. “Black and white. Night and day. Sin and virtue. The hunter, the prey. Tell me, whose God’s the one to say. This garden’s vespers are rising on the wind. Pity, she prays. May this sunrise reveal the shades of grey.” This song also contains an artist’s easter egg of sorts – “… Anyone can hear. For those who listen, she unveils the vision.”

Dissolution – Our protagonist is moving through the darkness finding his light. Once calling for the mercy and aid of a Goddess now he is finding, celebrating and asserting the masculine energy inherent in his truest nature. God and Goddess, fully summoned, he asserts his will and energy to lead them both on a journey of sensual, erotic and creative discovery. This song is inspired by the original sense of the ideas expressed in the saying, ‘la petite mort.’ “… Falling off the precipice. Letting go of what to be. A little death can bring ecstasy. … Aroused as we arrive, the shadows in our eyes, dance and come alive. Near the flames, we grow afraid of all we cannot name, of falling to the grave. Still alive, terrified, dissolving – fading away …”

Psalm I – The album arrives at its most serene moments in the first two verses of this Psalm. Our protagonist has found tranquility and marshals his full intent to find The One. After the gentle opening two verses, the song gathers an ever increasing momentum and energy – pushing our character embodied in the poetry and the music into a deeper spiritual, sensual and psychedelic emotional landscape. “Tonight beneath the moon, the seeds of song have bloomed. Behold her body’s incantations. Behold her eye’s divinations. I’m drawn deep into those dreams, lost in the clarity. Desire our soul vow, the flames where we are bound. Two strands two hearts together. We are one.”

Primordial – This interlude is intended to have a perfect symmetry with Circle X. Rather than descending down to a purgatory, we ascend into a higher spiritual and cosmic realm. I make use of some of the sounds of the birth of the universe that I embellished with some heavy sound design. My intention was to create my own sonic painting of a spiritual and cosmic rebirth propelled along by cosmic winds into ever expanding realms of awareness. This leads the album and the listener into …

Verse V – I was reading an ancient text that is meant to be an instructional manual on the art of dying. As I read and contemplated it, I developed my own interpretation – one where I saw it as a guide to the art of living. “Now I rise, clear my eye, lucid in the dreams I’m weaving … … I sail a vessel, on oceans of dreams. Flowing and weaving, connecting all streams. I won’t squander this chance in this between.”

Blue Communion – This is the culminating exposition of all of the musical, poetic and lyrical themes on the album. I had myself convinced at some point that there is such a thing as a soul mate. I trust that she is out there. This song is for her. “Lifetimes in search of that feeling. Enough to stand alone but made whole joined with you. Winding all paths to the spirit – the soul I once met now held by flesh formed as you. Our bond cannot be broken, or severed by our walls. Across the oceans, across all time, we follow heaven’s call.”