Track By Track: From These Ruins – Advocate of the Unwanted

Hey everyone! Rusty Sparks here, lead singer for the metal band, From These Ruins. I wanted to take this opportunity to give you a little behind the scenes glimpse and a look inside my inspiration for the lyrics for our debut record, Advocate of the Unwanted. 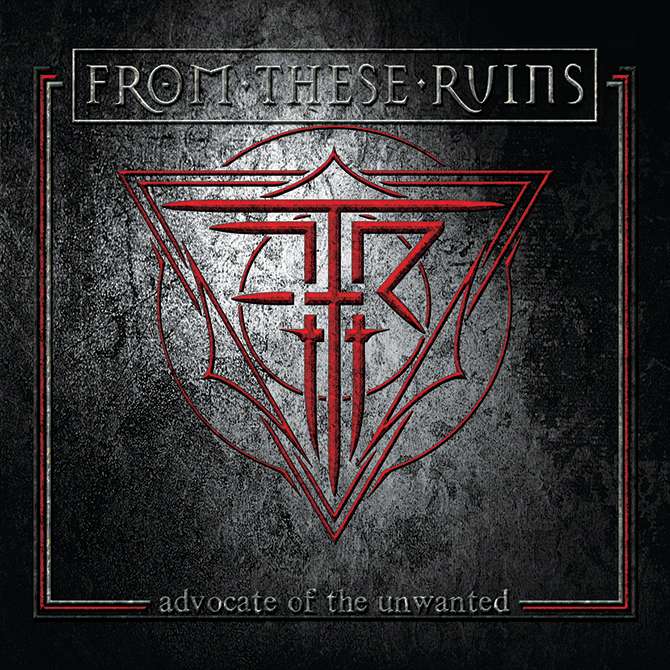 Being a new fan to electronicore, I wanted to write an intro to our live set with a foundation of electronics to give the sense that something awesome was about to happen. Something to cause people to participate with claps and fist pumps while screaming HEY! Once written and introduced to the band, they felt that Stand would have the same effect to the listener on the record.

I had a blast playing with different sound effects and cool samples. This gave Chad a chance to shine with powerful percussion as well. The name is taken from scripture. Ephesians 6:13-14 speaks of trials to come and preparing to defend yourself with a righteous anger. Whether one is inspired by religious texts or not, the message has no border. All humans must find inspiration and stand for what they believe.

Pesticide is basically a metaphor for the blood of Christ. Think of sin as termites infesting your home (your body) and eroding its walls. You call an exterminator to use pesticide to remove and destroy these pests. With this in mind, while reading the lyrics, it all becomes clear. I once read a bio-science article on the negative effects of what one may perceive as wrong or evil. As if the article was inadvertently giving scientific credence to “the wages of sin is death”. The article concluded that the brain sent out endorphins into the blood stream. I’m no scientist and whether God be real or not, someone had become aware of the side effects of wrong-doing when writing those words.

I had this almost pop like tune in my head that I kept humming. I thought they’re probably going to shoot this down but I’m going to bring this to the guys anyway. I threw together a sentence and sang it at a rehearsal. Tim picked up his guitar and instantly played an amazing riff to it that transformed its vibe into a unique and cohesive metal tune; we had the verse. I had written a small piece of music on the acoustic that coupled very well with the verses and we were in the process of writing my favorite track. Now for the lyrical content. I was watching a faith based inspirational speaker on TV and he kept shouting the phrase “Run to win!” I was captivated by the fire in his words. I took his message and created a chorus. His message was simple: If you’re going to run a race or you’re going to reach for a goal, don’t walk slowly, and run to win.

Being in a metal band gives us a rare opportunity to see into the lives of our fans. After a performance it’s common for people to want to meet you. This is obviously a thrill for both band and audience. Here’s where we get to know people as more than fans and become friends. Through social media we get messages of how our moment in the spotlight did more than entertain them, it encouraged them. “Unwanted” is the title track for this reason. Beyond the music, a message of hope is the basis of From These Ruins’ lyrics. I was invited to speak at a high school as an agent of the band. Without the words being written they simply rolled off my tongue; “From These Ruins are the Advocates Of The Unwanted”. That sums up the purpose for writing this track. We are a mixture of different spiritual views and positive thinkers and feel compelled not only to entertain, but to connect and be positive influences in the lives of our fans.

It must be clear now that I, being the lyricist, am a Christian. No not a judgmental d-bag, but just a genuine human in need of something more than this life was offering. How I came to that decision for myself is a book in itself, but let’s just say that the options were suicide or a divine intervention. For me, it was the latter. FTR is not what I would categorize as a Christian band but obviously my being one, the topic will inevitably show up in our lyrics. Enamored is nothing more than an ode to the positive effects my faith has had on my life. I can take very little credit on the passion that is expressed in this song musically. The band handed this one to me on a silver platter with music that would give you goosebumps solely on the guitars and drums. They created a musical masterpiece that I was honored to sing to.

Every now and then I get frustrated with the circus of politics and the pain the world at large inflicts on itself and others. This isn’t the normal mood for me, so since I was having one of those moments, I thought I’d capitalize on it and grabbed a tablet and pen. I confess that my tolerance for finger pointing and blame shaming wavers on occasion. On an average day, I feel nothing but love for my fellow man but that doesn’t mean their actions can’t periodically bring me to the point that rather than wanting to save the world, I’d rather just hand them the match and watch it burn.

To be honest this was one of those times when the band played something fantastic and I uttered the words to the melody before I even knew their meaning. We set that piece of music to the side while we had many more songs on the stove we were cooking. But this small piece now known as the chorus of “Losing Control” has become one of the sharpest blades in our arsenal. We rarely perform this without having someone with my microphone in their hands claiming the entire chorus as their own. Sometimes in life we as humans push back against our own best interest in fear of the unknown results of our decisions. Sometimes it is necessary for us to let go of the structure that boxes us and lose what we perceive as control. It is partially fiction and partially drawn from my personal struggles.

This track is as bipolar as my emotions that inspired its title. “Feed from Me” has a twofold message. You can hear me struggle with my passion to ride in this From These Ruins vehicle full time while being forced to make ends meet at home or life’s constant diversions always holding me at the threshold of complete success. At least that’s the way it feels. All musicians, or anyone trying to achieve their dream, can relate to this battle. So on one hand I’m telling people to feed from me; take what they need from FTR to become enlightened and driven. On the other hand it feels as though I’m feeding someone else willingly from my love and passion through art and a cannibal is trying to tear at my flesh and steal it from them.

The meaning of this song is best described by its bridge. “Traces of you and me. Empty spaces and memories. Lately all I see is you. Consolation I’ll see you soon.” Recently we have been wrestling with the loss of loved ones. We can look around and see the continuous reminders of a lost loved one’s absence and for a while it will consume and torture you. But as difficult as it is, we must stand back up and live. From These Ruins relies on their spiritual roots to help heal and chase away the fact they are forever lost to us. There is nothing more painful than losing someone close to you. “Traces” reminds us that while grappling with this pain not to let it paralyze you. It’s also a way for us to say to the ones we lost we will see you again.

I guess that I would say that in my mind “Divination” is the closest thing on “Advocate Of The Unwanted” to describe the meaning of the name From These Ruins. At one time our logo was a phoenix. As we all know the legend of the phoenix, once it dies it is reborn from its ashes new. The first line of Divination speaks of a person going through an experience much like a modern Frankenstein; Once being dead and returning alive. It also puts emphasis on dealing with our demons whispering in our ears to do those things we know are wrong or harmful to others and the inner struggle to shut them up.

Ah, the gem of the album. It would be a close call for our fans which is the better song “Slave To Nothing” or “Losing Control”, but for FTR this is the shiniest coin in the pouch. So much so, that it was the first to get an official video. Just before we play this song live, I always say that I wrote this song when I was a slave to hate, but I am a slave no more.

Hate is actually only one of many evils that trapped me in my colorful past, but the one that everyone can relate to. I also express the sensation that the chaos of today’s society is pushing everyone into the ring. As though we all have to pick a side and fight to the death. I prefer to avoid this confrontation, but if I must, I reluctantly will. But all in all I think all humans should lay down their metaphorical guns and realize that we all want the same things, peace love and happiness. If it were truly possible for us to love our neighbors as we love ourselves, there would be no hate or need for battles.