We covered Vektor last year, when they went on the road with Vaporizer (read about it here) and we’re excited to bring you the exclusive tour diary of their current tour with Eyehategod, Iron Reagan and Strong Intention! Read the first tour diary entry here, and check out the second installation below.

We arrived at The Depot, the venue we were playing that night, at about 5 o’clock. The place was desolate. No bands, no employees, and locked doors. The spot was in the middle of nowhere too. After waiting 15 minutes or so we decided to just check into a motel for after the show and cool off and what not for a bit. We cruised back to the club around 6 and unload. It was a pretty rad spot and everyone working there was great! The other bands showed up about an hour later and informed us that they were staying in the same motel. The Rodeway Inn. With that information we knew the night was gonna be a rager. It was. Also the Reagan dudes had a random person come up to them with a care package full of snacks and water that was supposedly promised the night before. Many chips were eaten. Anyway, all the bands were real solid that night so spirits were even higher after the sets. After EYEHATEGOD played it was shot after shot at the bar until about close. Beers were bought and taken back to the Rodeway and it turned into a multi room rager that led to backflips, wrestling, a lady about to call the cops, and a failed attempt at getting food. Videos may surface.

We woke up in a haze, got a late check out and cruised to Hamden. The road tunes were on point for this drive. Manowar, Hear n’ Aid, Exmortus, and our old buds from AZ, Rapid Fire. Good shit. We got to the venue and with plenty of time for an easy load in and heavy consumption of lasagna. We were surrounded by forest so I explored a bit and found this pond. It was nice to have a bit of quiet amongst all the chaos. It started raining pretty hard shortly after but it felt good. Gotta shower at some point I guess. It was another night of pretty heavy partying. Might I add that hanging with Iron Reagan, EYEHATEGOD and Strong Intention every night was great. We’ve known the Reagan guys for a bit and always have a great time but EHG and Strong Intention quickly became good new friends. The magic of touring. The show that night was good! The sound was great and the crowd ruled. A couple of technical problems for us but nothing detrimental. We hung at the venue for a while after where Blake and Mike from EHG shared their passion for Howard Stern, it was adorable, loaded up and headed to Brooklyn. Goodnight!

We crashed at a Walmart about 30 minutes outside of Brooklyn. Dave apparently slept walked in the middle of the night and was woken up by three officers. Weird but everything was fine. Made the short drive to Brooklyn and stopped to get food at this spot called the Doughnut Connection. I got the Un-toasted bagel, fake egg/bacon sandwich special. It was great… 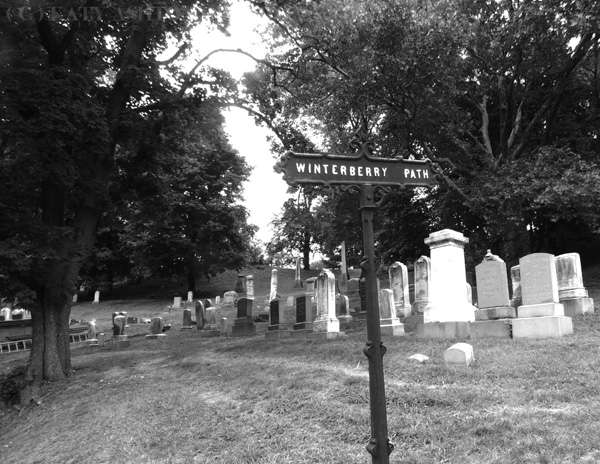 We cruised around this super old cemetery for a little bit but eventually got kicked out for having an oversized vehicle. We had a few hours to kill before load so we went to that Obscura shop in Manhattan and checked out all of these oddity type gems and antiques. The place ruled and the owners were there so they told us how they started out and let us get a couple pictures. I gotta save a few bucks and purchase the taxidermied squirrel Ferris wheel. We headed to the Acheron after. That place is sweet! Everything was going good. We got to see some old friends, I got to see my llllady. Though after Strong Intention played and we were supposed to go on, Dave was nowhere to be found. His wife Katy was at the merch table so I asked where he was. Evidently he got some kind of bug or food poisoning and was vomiting for close to an hour straight outside. She had tried to tell us but I never got the message. I ran out to see what his condition was. It was rough. He was in the driver’s seat of the shuttle with 3 empty water bottles on his lap. He could barely speak at a volume higher than a whisper and was physically more weak than I had ever seen him. There was no way he could perform. Iron Reagan offered to trade time slots but with them having a pretty short set and Dave’s condition, it was a lost cause. For the first time ever we had to pull the plug on a show the night of. We felt awful but there was nothing we could do. We explained everything and thankfully everyone was understandable. We passed out some merch and promised we would be back soon. This is something that is being solidified now. It’s awful to have to cancel a show but it would’ve have been dangerous to Dave’s health if he had played. Luckily Brooklyn is only a couple hours away. We hung out the rest of the night as Dave slept and said our goodbyes. Hopefully future plans will be made because being on the road with EHG, Iron Reagan, and Strong Intention was a blast. Our priority now is writing though and getting this next album ready to unleash on the world. Sci-fi or die, mutants!