Punk in film is a mixed bag. Several movies come to mind—especially from the 80s—that portray punks as clueless boneheads with sneering scowls and perfectly quaffed mohawks. Films like Class of 1984 (1982) and Class of Nuke ‘Em High (1986) are prime examples of such nefarious punksploitation, personifying the punks-as-lugs image in spades.

Director Penelope Spheeris has had a different take throughout her colorful career. With an obvious affinity for the early scenes, Spheeris made several films—The Decline of Western Civilization, Dudes and this, the psycho-drama Suburbia—that cut through the clutter with a more honest and open take on the subject matter.

Released in 1983, Suburbia, is a gritty, authentic vision of disenfranchised youth (who in this case, happen to be a gaggle of L.A. punks). Produced by legendary horror and exploitation filmmaker Roger Corman and directed by Penelope Spheeris—who was fresh off the success of her first punk opus, The Decline of Western Civilization—the film chronicles a clutch of homeless teenagers holed up in abandoned house, each with their own sad story of abuse and neglect. 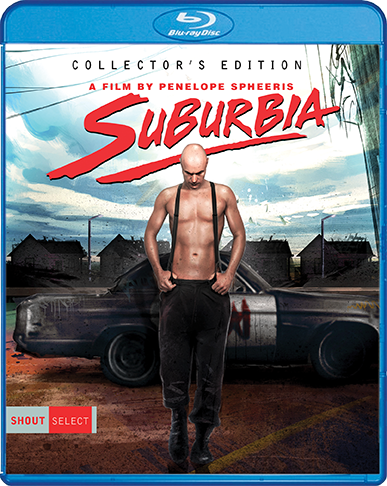 While much of the dialog is stiff and wooden, these punk squatters actually look like the genuine article. There are no over-the-top, fashion experiments, and the kids seem most concerned with going to shows, getting drunk, and supporting their extended family—“T.R., The Rejected.” The family namesake exemplifies the theme of the film.

Times are tough; the economy ‘s bad, and some of suburbia’s more ignorant types are taking out their frustrations on the punks, who, in reality, are mostly just kids longing for a sense of family and belonging.

Whether it’s being involved with the early 80s punk scene, or just following one’s own stylistic track within a closed community, there’s a decent chance you’re going to get some shit along the way. Spheeris seems fixated on showing the effects of that alienation, doing so with a brutally honest view. On the flipside, there are also a couple of graphic and twisted death scenes involving very young children that were either slipped in by Corman for exploitation purposes or as a metaphor for the mean streets run amok, even in the supposed safety and serenity of the suburbs.

What’s most refreshing about the film is that the punks featured therein feel real—and most were, as the film only featured a couple real actors. But that’s not to say there still aren’t some boneheaded maneuvers, like the skinhead and his buddies who strip and terrorize the valley girl in the club scene—rotten stuff.

In an earlier release, the DVD featured an interesting commentary with Spheeris, who surprisingly makes light of the abuse of said valley girl, which was pretty shitty. But in more recent interviews, the director claims that Corman required that ample shots of sex and violence be written into the film in order to get his backing. While it doesn’t change the uselessness of the scene, at least there’s a little more context, which to maybe some degree illustrates how times have hopefully changed for the better.

This flick has been out of print for eons, and should be required viewing for anyone interested in the L.A. punk scene circa 1980s. The sharp, new 4K scan does the film due justice with pristine picture and sound. And, be sure to keep an eye out for a young Flea from the Red Hot Chili Peppers as one of the squatting punks, plus some great live sets from L.A. legends TSOL, D.I., and The Vandals.

For questions, comments, or something you’d like to see, drop me a line at Retrohead77@yahoo.com. Cheers, Kaz

PrevDroning On: A Look at the Noisiest Noise
Antagonism, Grief, and Heavy Music: Inside Pelican’s ‘Nighttime Stories’ with guitarist Trevor de BrauwNext