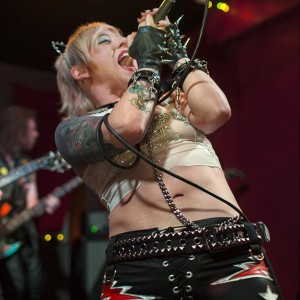 In a starkly lit underground club, bodies packed from wall to wall, circles begin to form, sweat drips, raw emotions ooze in anticipation of the first impact… this isn’t Fight Club.  This is Loathe fresh in from Liverpool at Underground Arts in Philadelphia. You know it was a killer hardcore show when the photographer goes home with a black eye.

While talking to a handful of fans before the show commenced, it seemed one apparent draw for the long sold-out event was supporting act UnityTX, and I would later see why! With Houston-based Omerta and fellow brits Static Dress rounding out support for Loathe, it proved to be a very energetic and diverse lineup and crowd alike.

Omerta came in like a sledgehammer to start out the night. In fact, it was within the first few minutes of their opening set that I nearly lost a contact and acquired the camera eyecup’s imprint on my eyelid in the form of the black eye I would sport for the next few days. This band is straight-up metallic hardcore. They pushed through right from the beginning of the set with a wall of chunk and blast beats. Needless to say, the crowd was warmed up from the get-go.

Described as being on the more metal side of hardcore and hip-hop and incorporating notable amounts of electronica, Dallas-based UnityTX has one consistent thread: slamming rhythms and aggressive vocals. The combination creates a depth to their sound complimenting their lyrics’ hard-hitting social criticisms and message of diversity in the hardcore scene, a scene finally seeing a more definitive transition to a more inclusive musical environment for Black and other minority bands in hard music. Other bands have broken through from time to time, but a renewed push to break down walls in the scene is starting to gain steam more than ever. That theme was highlighted throughout the set by singer Jay Webster. I very much enjoy discovering opening acts with unique sounds that exceed my expectations, and even on the band’s sound and musical talent alone, all I can say is, check them out. You won’t be disappointed.

From Omerta to UnityTX to Static Dress, the energy levels of this show never fell. Static Dress even kicked it up a notch. While some bands’ energy comes from the entire group, Static Dress made it difficult to take your eyes off the seemingly boundless energy of singer Olli Appleyard. Direct from Leeds, U.K., the band craft more of a post-hardcore sound dipping into numerous other metal and emo-adjacent sub-genres. Already a group gaining quite notable steam in their homeland since their 2018 formation, and despite a lifespan significantly marred by the COVID pandemic, they’ve managed to orchestrate a multi-experiential deluge of content that has garnered a dedicated following and propelled them across the pond and into our backyards.

With the momentum of the show still pushing higher, enter Loathe! Taking hardcore to a heavier and often grittier level, their music slides seamlessly back and forth from aggressive often distorted metalcore screaming vocals and abrasively thick guitar chords to floating melodies. While known for their theatrical presentations onstage, this show took a more straightforward minimalist approach with the exception of a lone screen to present additional visuals as a backdrop to their performance.

As intense and chaotic as hardcore shows get, LOATHE’s charismatic frontman, Kadeem France, effortlessly transformed the crowd’s fervor into a unified vibe locked into the band’s rhythm like we were part of a choreographed video, the kind of organic synchronization that is a rare sight to behold. From unified pulsations of the audience to a sea of handheld cell phone lights directed toward the stage culminating into a room of outstretched arms swaying from side to side, Kadeem went beyond simple engagement, harnessing the crowd as if they too were part of the performance.

With no shortage of engaging acts and a complimentary but diverse range of aggressive musical stylings, it’s no surprise this show sold out long before its date arrived. The cramped floor space and multiple bruises are well worth the experience alone. With a solid lineup like this, there’s no reason to stay home.