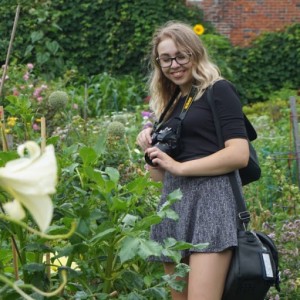 Fresh off of a run of festival appearances and Knotfest Iowa, Slipknot brought their iconic Knotfest Roadshow to Holmdel, NJ on Sunday.

The crowd at the PNC Arts Center was certainly a sight to see that night, with many fans wearing the mask of their favorite member or decked out head-to-toe in an Iowa-esque jumpsuit. I overheard one venue worker loudly joke to a colleague, “What is this, a cult or something?” to which someone in a Clown mask yelled, “We’re maggots, motherfucker!” Despite the slightly off-putting appearances and use of language that would make a sailor blush, being surrounded by fellow maggots felt like home.

Pittsburgh hardcore outfit Code Orange warmed up the crowd with a brief yet racous set that set the tone for the night. Although a majority of the crowd wasn’t in their seats yet (and damn, did they miss out), Code Orange rocked the stage like it was their very own headlining show. Songs like “Last Ones Left” and “Underneath” were crowd favorites and certainly established a horde of new fans by the end of their set.

Next, Fever 333 brought nearly an hour of complete insanity to the stage. As someone who had only heard stories about Fever’s legendary performances, I had high expectations for their set. To say that they exceeded those expectations would be a gross understatement. Their high-energy, angsty, chaotic set was unlike any artist I had seen before. All three members — Jason Aalon Butler, Stephen Harrison, and Aric Improta — brought their own form of excitement to the stage. Harrison would do gravity-defying guitar tricks, while Improta was one of the most high-energy drummers I’ve ever witnessed. Butler’s stage antics were mesmerizing, as he created towers of amplifiers, climbed anything and everything, and skateboarded across the stage during “Hunting Season” However, at no point did their acts feel forced or campy– it was punk rock as hell.

Killswitch Engage was the third and final opener, and seeing the metalcore legends play a career-spanning 14-song setlist felt like a dream come true. As a longtime Killswitch fan who had never had the opportunity to see them live before, I was blown away by frontman Jesse Leach’s live vocals. Most songs, such as “Hate By Design” and “Us Against The World” sounded even better than the studio versions. A highlight of the set was the band’s iconic cover of Dio’s “Holy Diver” that got everyone out of their seats with their sign of the horns in the air.

After three amazing and varied sets from the incredible openers, it was time for Slipknot to take the stage. The excitement in the venue was palpable, and when “For Those About To Rock (We Salute You)” began playing over the speakers and the lights dimmed, it felt like the crowd was going to explode from excitement. The “Insert Coin” interlude was even more of a tease. But when the curtain dropped and the band launched into “Unsainted”, the wait was immediately worth it.

Any self-proclaimed music fan knows that Slipknot is known for their incredible live shows, but the band took it to new levels this tour. Despite recently contracting and recovering from COVID-19, Corey Taylor sounded the best that he has in years. His energy, vocals, and showmanship were completely incomparable to previous tours. Additionally, his screams in songs like “Disasterpiece” and “The Heretic Anthem” rivaled those of the band’s early days. Corey’s incredible performance is only a small part of the equation, however. Guitarists Jim Root and Mick Thompson were more energetic, with Root’s constant headbanging while perfectly executing legendary riffs a sight to see. Meanwhile, Clown, Craig Jones, and Jay Weinberg were incredible as always. Despite being towards the back of the stage (except when Clown beats a beer keg with a flaming bat during “Duality”), Craig’s electronic loops, Jay’s insane drumming, and Clown’s percussion, their presence was not one to be minimized.

Not one to stay behind his turntables for long, DJ Sid Wilson’s onstage behavior was as confusing, strange, and entertaining as always. At one point, he grabbed a large inflatable ball that had landed on stage and put it in his cloak to smuggle back to his tables with him. At other points, he would lurk around the stage and interact with the crowd and other members of the band. His chaotic behavior is almost a sort of comic relief at times and adds to the crazy, beautiful spectacle that is a Slipknot show.

The newer members of the band, V-Man and New Guy (also known as “Tortilla Man” by fans), were also at their peak performance. With this only being Tortilla Man’s second tour with the band since percussionist Chris Fehn left the band, the improvement between the previous Knotfest Roadshow and now is one to be applauded. His backing vocals on songs are much stronger and more aggressive, and his on-stage behavior has become more chaotic. Seeing him come into his own in the band has been a welcome improvement, especially with the wound of Fehn leaving still fresh for many fans.

The band’s set was filled with newer songs like “Nero Forte” and “Solway Firth”, deeper cuts like “Vermillion” and songs that Clown affectionately calls “barn burners” — “Surfacing” and “Duality.” In between almost every song, Corey took the time to affectionately address the crowd as “You crazy motherfuckers” and talk about how good it was to be back on stage, assuring us that as long as the fans show up, Slipknot will keep playing for as long as they can. At one point, he talked about the community of Slipknot fans and the wider metal community as a whole, saying that “There’s something just a bit fucked up about each of us,” which resulted in cheers from the audience. He’s not wrong– many Slipknot fans have found the maggot community to be a safe haven from the problems in our daily lives. We’re all just a bit fucked up, and we celebrate it. This celebration was furthered during the “WE ARE NOT YOUR KIND” chant during “All Out Life,” a moment of solidarity between all those who don’t fit in and celebrate it.

The 13-song main set was followed by a 3-song encore that consisted of “People=Shit”, “Sic”, and “Surfacing.” Although Slipknot played for nearly two hours, both the audience and the band could have easily kept going all night. Everything about the night was perfect from the opening note of Code Orange’s “Swallowing The Rabbit Whole” to the closing note of Slipknot’s “Surfacing.” As I exited the venue, I was surrounded by a group of sweaty yet giddy fans each wearing a Corey Taylor mask from different eras asking each other, “So, when do we get to do that again?”