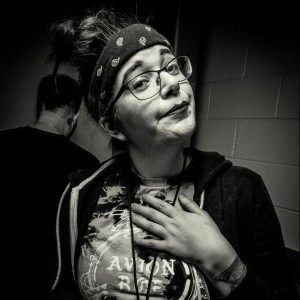 Show Review: ‘Tid the Season with Every Time I Die at Buffalo Riverworks in Buffalo, NY

On December 13 and 14, Buffalo hardcore band, Every Time I Die had their annual holiday extravaganza. For the first time, “Tid The Season” was two days, encompassing music and various other activities such as curling and wrestling.

The list of bands included Every Time I Die, The Damned Things, Against Me, The Get Up Kids, Mongol Horde, the wrestlers, and Cave In.

Doors opened at 4 p.m., and immediately, people ran into Riverworks to the merch tables to take in the unique things that Every Time I Die and every other band had for sale. Buffalo’s own Oxford Pennant also had a lot of cool patches and enamel pins for sale. Once it was time for the show to start, Friday’s festivities opened with Mercy Union, Harm’s Way, Terror, Against Me!, and Keith Buckley’s other band, The Damned Things.

Every opening band proved why they were chosen, playing to a hyped-up crowd with people climbing on each other to crowd surf and opening up mosh pits. Against Me! finished, and the screen came down to cover the stage to set up for the main event, Every Time I Die. The screen showed a burning fire in a fireplace and music playing from Peanuts Christmas.

Despite the wait for the headliners, the energy was palpable in the venue. Standing in the crowd, I could see everyone planning to move as soon as the mosh pit opened up, and people were ready to jump as soon as the music started.

When it was finally time for Every Time I Die to go on, the screen went dark; the music stopped, and the crowd was ready. The band wasted no time of their hour-plus set, opening with the fan-favorite “Floater” off of Hot Damn. The mosh pit opened up, and all hell broke loose.

Throughout the setlist, the band covered almost every record and even played two new songs. One new track, titled “White Void,” was played on the annual boat shows in New York City in September. The song sounded even more epic in the huge hall and with the crowd still crowd surfing, moshing and moving despite not knowing the words. Every song was accompanied by sparks, smoke, and lighting effects. I love some good stage production, and Every Time I Die did not disappoint.

Before the first new song, the band played songs off Hot Damn, Low Teens, From Parts Unknown, New Junk Aesthetic, Ex-Lives, The Big Dirty, and Gutter Phenomenon. They ended their set with “Fear and Trembling” off of 2016’s Low Teens, a new song currently titled “Sayonara,” and “Indian Giver” off of Ex-Lives.

Right before that set of songs, the band played arguably the biggest song they’ve had off of their 2016 effort, “Map Change,” which is their love letter to Buffalo. That was followed by “Two Summers,” also off of Low Teens, and “Idiot” off of From Parts Unknown.

The band also ended their set with confetti, something you never knew you needed at a hardcore show. But, given all the stage production, it was the perfect ending. When the beatdown ended, the crowd dispersed, taking in what they just experienced and planning what the next move was.

Every Time I Die

The second night started earlier, with doors at 1 p.m. The set kicked off with guitarist Andy Williams wrestling. For an hour and a half, the crowd was treated to a whole bunch of matches between a bunch of wrestlers and pairings. Having never experienced wrestling live before, it was quite the spectacle.

The crowd was heavily involved in booing the “bad guys” and screaming various chants for certain wrestlers. The main attraction for wrestling was, of course, the Butcher and the Blade, Andy Williams and his partner, Braxton Sutter. When their entrance music played, the entire crowd, who was already rowdy and on their feet, screamed even louder. They took on their opponents, and in wrestling fashion, it was very dramatic, but ultimately the Butcher and the Blade won.

After the match, Andy Williams gave a speech about giving everything 100 percent and pursuing what you want to do. (I’m sure the speech is on YouTube somewhere; if you haven’t seen it, highly recommended.) Once Andy was done, Braxton grabbed the microphone and spoke about how hard-working Andy Williams is and how happy he was to have a partner in crime like him. It was a very solid moment, and the crowd responded appropriately. There was a little bit of time to kill after, as the Riverworks staff broke down the wrestling ring and the guardrails that were put up for it to get prepared for the next part of the day.

Once the floor of the venue was emptied, the music could start. The first band up was metal newcomers and heavy-hitters SeeYouSpaceCowboy. They are an incredible band if you’re not familiar. The vocalist, Connie Sgarboss, got the crowd moving immediately, and once the pit opened up, it did not close all day. After them was a band called Candy who were also eager to prove they could get the crowd moving.

The other openers included Frank Turner’s Mongol Horde, Glassjaw, Ghostface Killah from Wu-Tang Clan, The Get-Up Kids, and Cave In. After the last band finished, the screen once again came down, and it was time to set up to screen and the Christmas music before all hell broke loose once again. But this time, Marc Miller started the introduction of Every Time I Die. (In case anyone isn’t familiar, he’s famous for the “Dallas is going down” Buffalo Bills hype video.) The Bills played on Monday night against the Pittsburgh Steelers, and Marc made sure to update his commentary appropriately.

The lights went dark, and the crowd roared, Andy Williams walked out to play the opening riff of “Roman Holiday.” That is when I knew we were in for something else. The set was another unrelenting list of songs spanning their discography. Much like the night before, the crowd was just perpetual people climbing on each other, opening the mosh pits and general chaos.

After “Roman Holiday,” the next song was also off of New Junk Aesthetic and the next track on the record, “Marvelous Slut.” Unlike most bands who play two nights somewhere and repeat a lot of the same songs even if they change the setlist up, there were hardly any repeats from the night before. The setlist consisted of old tracks, fan favorites and another new song that was previously unheard. (Every Time I Die is putting out their ninth studio album at some point in 2020.)

Other than the two openers, the band pulled out one of my personal favorite songs, “Who Invited The Russian Soldier?” There was even a song off of their first EP, Last Night In Town that made the setlist, “Emergency Broadcast Syndrome.” (They used that song to open up their 20-year tour last year.)

In general, Every Time I Die shows, and setlists, come at you like a freight train, and you’re either on board with the incoming chaos or you’re getting out and standing in the back. The two nights in Buffalo were no exception. The chants to bring the band back on stage for the encores were a combination of the “Let’s go Buffalo” and the usual “one more song.”

The set this time had the same amount of production, and the band had just as much stage presence. You would’ve never known they played until after midnight the night before. The last five songs of the set are as follows, “Decayin’ with the Boys,” “El Dorado,” “Floater,” “Moor,” and of course “Map Change.” As the last chorus of “Map Change” was played, the confetti went off, and everyone sat back and enjoyed the end of another insane Every Time I Die show. But, unlike the day before, Jordan continued to play out the last chords of the end of the song for an additional 10 minutes much as he did at the end of the 2018 Warped Tour at the last date.

Keith Buckley is one of the vocalists who does not talk very much in-between songs; however, when he does, he usually has something important to say. He discussed how Andy turned 40 and decided to pursue a wrestling career aside from being in a band that tours an insane amount of the year, and about how he’s always happy to hear stories about people in Buffalo being welcoming and nice to people who come to the holiday shows from across the country and across the world. But, after seeing the band play two hour-and-a-half sets in their hometown, you’d want to make the trip, too.

PrevShow Review: For The Children 2019 at the Ice House in Long Beach,CA
Show Review: New Bomb Turks and The Atom Age at Kung Fu Necktie in Philadelphia, PANext