Al Jourgenson is putting his legendary industrial monster Ministry to rest for good. After the very unfortunate death of Mike Scaccia, Ministry’s guitarist and Al Jourgenson’s best friend, the band has reached the official end of the road. There will be two more releases for Ministry one is a live DVD called Enjoy The Quiet – Live At Wacken 2012 which is one of Mike Scaccia’s last performances with the band and their 13th studio album From Beer to Eternity which will drop on September 10th and I feel stands up to their best work. Mr. Jourgenson also has an autobiography out entitled Ministry: The Lost Gospels According to Al Jourgensen that is horrific and nauseatingly awesome. This interview was done over Skype and a few fermented long distance beverages.

I have had From Beer to Eternity on perma-play for three days now, man. It’s knockin’ it out for the park for me.

I had to knock it out of the park. I had my best friend of all time, my little brother, die on me two days after he finished his parts. So mixing this one was tough. This is the toughest mix I have ever done. It was horrific. Sammy (D’Ambruoso) is very close to Mikey, too. We would be listening to something he did and then we would just start crying. You try to work like that every day. We put it all into this one so it’s gotta be over now because to me there’s Jimi Hendrix and there’s Michael Ralph Scaccia. That’s his middle name. They are the two most soulful guitar players I have ever heard in my life and I never had the chance to work with Jimi so I feel very blessed that I got to work with Mr. Michael Ralph Scaccia. My other guitar players aren’t like chopped liver either like Sin Quirin and Tommy Victor but Mikey he just kind of raised the bar a little bit. He had a little bit more soul the rest of the guys had a bit more influence. They were influenced by other people a little bit, but Mikey, that was his soul. That was a difficult record to do. I’ve had a couple people say that, “This is the most melodic album you have ever done.” You know since the early-early-early days. Then I have had other people go, “This is the hardest Ministry record ever.” At the same time so it’s kind of dichotomous, it’s got a little bit of everything and Mikey was into that. He would come out grinnin’; as a matter of fact where we are talking right now is the courtyard of my house and it’s called the Mike Scaccia Memorial Courtyard because we used to sit out here and drink wine and vodka until we agreed upon what we were going to do that day and that whole record we are just drunk off our face. (Laughs. At this point we cheers our laptop screens with our respective beverages.) Long live Mikey!

The whole record was his idea anyway. I wanted to stop after The Last Sucker I figured the Bushes were ending and I’m tired of yelling about Bushes and this and that. Then we did a Buck Satan album, me and Mikey, Buck Satan and the 666 Shooters but to warm up we would kind of just pick at some metal stuff and then we would go into country for the rest of the day. So by the end of the Buck Satan record Mikey’s like, “Dude, we have to release this.” And I’m like, “NAW!NAW!NAW!” He psycho-dolled me for like five months to get me to do lyrics and game plan for it. He’s the driving force behind this record. Not me. I didn’t want to do it. It’s Mr. Mike Scaccia. Let me tell you something. As soulful of a guitar player as he is even a better person. He’s just like, “Where did this guy come from?” I found my best friend for life 30 years ago. No one else since. He was the real deal. 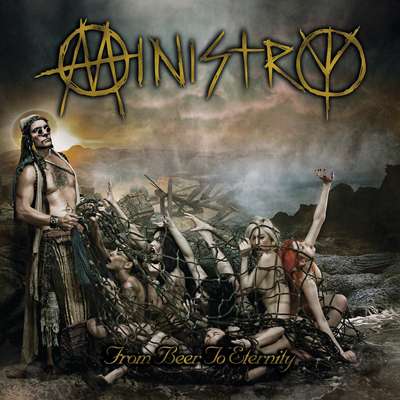 Did he push you in any directions on actual lyrics for the new album?

No, he never pushed me on lyrics. I wanted to do an introspective of my career realizing that that part of my career is over: Ministry. So there’s a couple introspective songs on there. I still want to be political but not just BushBushBushBushBushBush. So I really kind of attacked the system. The way the system runs. When I say The System I mean The System runs government. Government doesn’t run The System. So I touched a little bit on that but Mikey always left me alone on lyrics. Mikey would say, “Ahh you’ll come up with something clever.” (Laughs) That’s all he would ever say.

So what’s up next?

I’ve got some plans, I’m not quitting music. First of all I’m writing a fiction book called Mindfuck about a serial killer. That’s what I’m doing this summer is finishing this book that has been going on for too long: 28 years. I’m wrapping a lot of bows on a lot of stuff. Ministry, this book, and this and that. Now I will get to some other stuff. I’m not stopping music I’m just stopping Ministry. We may do a show sometime with Sin and Tommy Victor and Tony Campos on bass since Paul Raven is dead too. I had two deaths in the last couple of years that really freaked me out. So we may do a show or something and it will be great and all that but Ministry as a brand is just done.

Speaking of books your autobiography just came out. (read our review)

Yeah, I heard I got a book out. They made me read it once and I was disgusted. I vomited in my mouth. I was a dumbass! Look this is not a cautionary tale; this is not a redemption tale, this is just a snapshot of 54 years of some dumbass on some insignificant planet in a fairly middle sized galaxy in a vast universe. So if you’re getting excited about this then really you need hobbies, you need to do something else and that’s the way I view the thing. I read it once and I almost threw up. Well I didn’t almost; I threw up in my mouth and picked all the stuff out.

Well that’s the thing. Jon Wiederhorn from MTV would come here and we would spend a week wasted, hammered, shit-faced drunk and he would have the tape recorder going the whole time and I’d be telling stories. Then he would go away for four weeks and call up every reference of every story I told and would come back and go, “Okay those worked out give me some more stories.” Then we’d get drunk for a week and I would just talk then he went away for four weeks talking to witnesses “Yeah, I was there” and made it right. Then after that I thought the process is done but then what they do is send it to the lawyers and publishers which takes another four weeks for these lawyers to make sure of whatever. It’s crazy all I did is spend two drunken weeks with a microphone plugged into a tape recorder and all of a sudden I’m an author. With the irony being that I have been writing a book for 28 years: a real book. Now in two weeks I’m an author. (Laughs) It’s dumb. But you’ll like the book. The book’s funny, man. One review that Angie just showed me said, “It makes Hammer of the Gods, Heroin Diaries and all this other stuff look like kindergarten.”

Studio and production wise what are you working on?

Oh! We have to talk about this. Oh, you just hit a raw nerve. This one’s good. It’s this band I’ve been doing they’re from Nashville and it’s blues/country but more blues but like 70’s blues like when Cream was doing stuff. Like Ginger Baker and Jack Bruce and really good. So they’ve been doing this stuff on and off for seven/eight years well during those seven/eight years that they have been fiddling around with songs Mr. Mike Scaccia met them and they got all the Mikey riffs that you could have. And Mikey said this cannot come out unless you let Al do the rest: Pedal steel, harmonica, organ, piano and this and that. And I rounded up some gospel singers too from my local church that I go to. So they all came and sang. This Dusters record, and it’s on our label 13th Planet, it’s done! I just got it done last week. Last week I got everything done and now I want to concentrate on this book. But this Dusters album? It. Is. Mind. Blowing.