Who is Liz Prince? Liz Prince is an award winning punk rock cartoonist. She won the 2005 Ignatz Award for Outstanding Debut for her book “Will You Still Love Me if I Wet the Bed.” She writes comics about her cats Wolfman and Dracula, her love of pop punk, and her adventures in dating. Her work is self-deprecating and sarcastic, but always honest and sincere. With “Tomboy,” Liz tells us a sweet, yet poignant tale of a young woman riding the gender lines, learning to be comfortable in her own skin and become the person she is today. The book is geared towards a young adult audience, but feeling like an outsider is universal and readers of all ages can easily identify with the young Liz Prince and root for her to win.

You’ve worked with Masked Intruder, Razorcake, and Top Shelf Press, as well as made hundreds of zines and mini-comics over the years. Are you surprised where punk rock and comics have taken you? 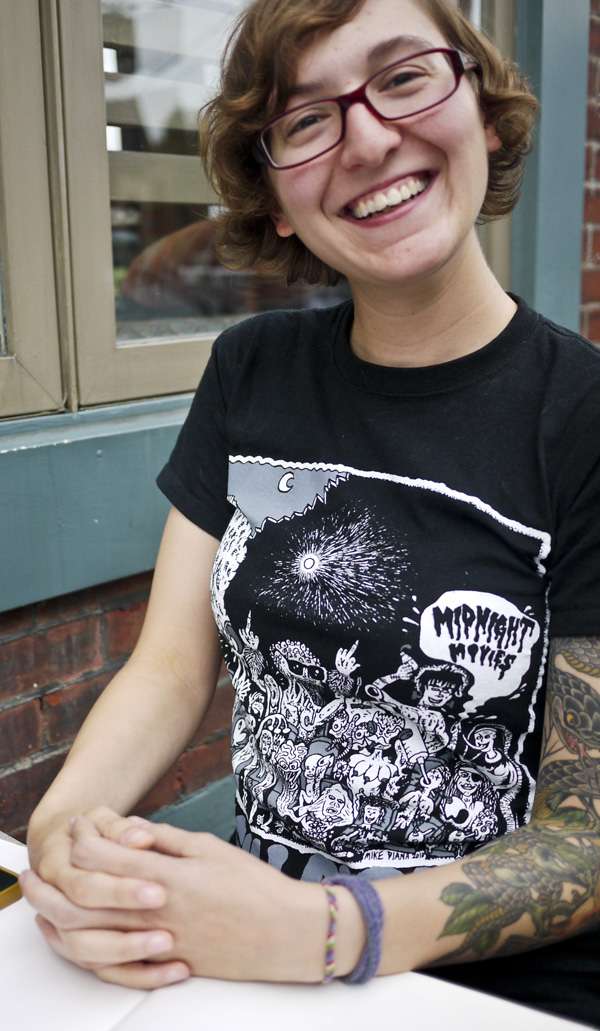 I don’t know if surprised is the right word, because I’ve always been very focused on drawing comics and drawing graphic novels had always been my goal. I guess I am surprised it took me as long as it did to actually sit down and really just draw one. Some of that is based on the confidence I had in myself, that I would be able to actually finish a graphic novel and that it would be something engaging for people to read. I guess it is a little bit disparaging that it took me till I was 32 to be able to do that, but I am really happy with the way the book came out. I think that for my first graphic novel it is a really good one. I guess if it took me that long, then it is worth it.

It’s funny because the work I am most well known for is the book “Will You Still Love Me if I Wet the Bed,” which came out in 2005. They’re comics that I drew in college. So there are still some people who pretty much only know me from that. I like that book a lot; it’s definitely not reflective of my ability as a writer or an artist. Now I’ll be able to take a big step forward from that, and hopefully, people will see me as more than just a gag cartoonist.

Where did you find the confidence to finally tackle this graphic novel?

I really just decided to do it. Zest Books – the publisher that is putting it out – contacted me about doing a book with them. They are primarily a teen and young adult publisher [so] it had to be a book that was appropriate for that audience. And not that I think my work is necessarily inappropriate for those audiences, but it’s not really marketed to those audiences. That actually took me a while to come up with a concept that I think would work for them and that I thought I would enjoy working on. Once I pitched “Tomboy” to them, and they said they wanted to do it, I had nine months to finish it. I kind of really didn’t have the time to sit and think about whether or not it was good. I just had to do it. I think that worked out well for me. Instead of being able to second guess everything, I had to just plow through it and finish it.

In “Tomboy,” you talk about identifying with feminist zines. Why were these writings so crucial?

I had grown up being slightly misogynistic and I was very into boy culture. I really thought that the best way was to assimilate and be as much like a boy as I possibly could. That’s what I identified with. I didn’t know many other girls who were as extremely tomboyish as I was. So finding punk and finding zine culture – where people were a lot more outspoken about their feelings and involved in a subculture where it’s not just like, “Oh, a girl looks like this and a boy looks like this!” – it really allowed me to be okay with the fact that I was never going to be a girly girl. Because that was what was constantly thrown at me. “Oh, girls care about their hair. Girls wear make-up.” It was nice to finally have it reflected back at me that not all girls care about that stuff. You can be a girl and not give a shit about any of that. That was really the most important part.

Is “Tomboy” a direct result of that?

I didn’t write the book to have any kind of morals. There is not supposed to necessarily be a lesson other than that there are tons of ways for somebody to exist in their gender that might not be what society defines it as. I certainly would be totally honored if people read the book and took that from it.

Was it ever painful to recall the moments you were documenting?

Some of it, surprisingly, was. I found that I don’t really remember specific instances based on what happened as much as how I felt about it. It was kind of going back and emotionally navigating those things. The only things that stand out are the times that you had a really good time or the time you had a really bad time. The stuff in-between, at least for me, it isn’t as vivid in my memory. I was going back and having to rehash a lot of those things. There is not a lot that I find to be too painful to look at. I was surprised by my own reaction while writing about them.

Was it harder to be so truthful, knowing more people were going to read it?

No. Being as truthful as I am in my work has never really been an issue. The only thing that was challenging was to write a book for a specific audience. I’m honestly a little bit afraid it is going to be the kind of book that parents, librarians, and teachers find to be not really appropriate for the 14+ age range that the book is marketed towards. I’ll be honest and say that I don’t really know a lot about young adult literature. I don’t really read that much of it. So, I don’t know things like how many curse words can you have, or how much can you talk about sex? Those were the kinds of things that I was concerned with when writing the book, but my editor told me, “Just tell the story. If anything comes up as a red flag, we’ll deal with it.” There wasn’t anything like that. They never asked me to take some “fucks” out, or anything like that.

When I was writing this one, I asked myself what I liked to read as a teenager. I liked to read books that didn’t pander to me and talked about things in a frank and honest way. The only time that I really swear in the book is in dialog, and let’s be honest: teenagers swear a lot! I thought I was being more adult by saying fuck as often as possible when I was 14 years old.


Were there other autobiographical works you looked to for guidance while writing “Tomboy”? 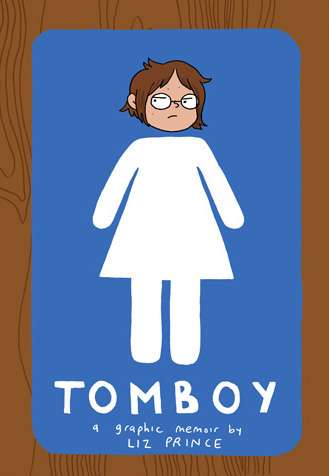 I was actually looking at Raina Telgemeier’s book “Smile” a lot. That book is for a younger audience. It tells a personal story in a way that is very fluid and doesn’t get hung up on, or even rely on, outside narration too much. So I was looking at that book a lot to see how she was able to frame certain things or give information without being too explanatory. In the end, my book is very, very different from that book in both content and the way it was put together. I was really just trying to look at other autobiographical books that were aimed at teenagers or a younger audience for guidance. Most of the graphic novels I read are primarily “for adults.” Since I was so concerned whether or not I could say or do certain things, I was kind of looking more towards that genre.

What do you think the Liz of the book would think of who her real life counterpart has become?

I hope she’d think I’m awesome! [Laughs] She’d probably think I am a little bit of a sellout. I drew a comic a couple of years ago that showed my high school self reacting to some of the things that I do now. First off, I like cats and I hated cats when I was in high school. I kind of had that whole “Cats are for girls, dogs are for boys” mentality. So I hated cats. I now wear dresses sometimes, although not that often. I think she’d think I’m cool. Dr. Frank [from The Mr. T. Experience] wrote a quote for this book, and my high school self would probably faint if she knew that I even interacted with Dr. Frank in any way, let alone had him read one of my comics and actually like it. She’d probably think I got a little lenient on the girl stuff.

As a 32 year old male, this book reminded me of my awkward phase as a fat teenager. What do you hope people – men and women alike – will glean from your work?

Well, number one, I hope that they enjoy it. Number two, I hope it reminds people that it’s not always so easy to be yourself. If you come across someone who you think is really genuinely being themselves, but getting a hard time for it, maybe cut them some slack.

Are you ready to become a role model?

[Laughs] As long as the people I am a role model for don’t look too closely at some of my more raunchy or racy comics! Unless they are age appropriate. I think I’d be an okay role model. I’m a good cat mom, so I’m ready to be a role model!

PrevInterview: Muscle & Bone Talks About Their Hometown & New Album ‘Peace & Light’
Interview: Kayser Tells You How To ‘Read Your Enemy’Next