Given the nearly two years of pandemic strife we are all continuing to manage, what better time to check up with friends and cater to those bonds we built in the before-times?

In that spirit, we got Dog Heaven’s Jamie Morrison and Vacation’s Jerri Queen together for a band-to-band interview, to catch up with a good friend, chat more about their current projects, and in general, just to see what happened.

Check out the full conversation below:

Jamie Morrison: What’s the title all about?
Jerri Queen: Are you familiar with the term “fork in the road”?

JM: I dig the record; I’ve been listening to it a lot. You’re still my favorite living band, I think. The other favorite bands of mine mainly now have deceased members, unfortunately. It fills me with joy that you four are all alive, and kicking!
JQ: I appreciate the sentiments. We are, in fact, all still alive as we speak.

JM: Some of the tunes really do kick; it seems like you’re more than capable to rip the guitar up these days. Do you miss being the drummer/singer guy?
JQ: There are three guitarists playing together on this album. Both John Hoffman and Dakota Carlyle righteously and harmoniously pluck away in the left and right channels as I erect a skeleton in the center. We did 90 percent of all instrumentation live, and I am really thankful for what they both brought to the session. Three guitarists in a live setting is sometimes an eye-roller for me, but they were very tasteful in crafting their parts.

I do look upon the early days of the band behind the drum kit fondly, yes, I must admit. Simple times, giving it all and still figuring it out. Honest. Someone told me in that era, “never progress as a drummer; stay exactly as you are right now,” and so, I wrote off the instrument.

JM: Do you ever feel like Dave Grohl? That would mean the first two VAKA albums could have been your Nirvana.
JQ: Around the same time, I met Dylan, and he played all the drum parts I had written better than I could. I experienced relief.

JM: Whats up with the weird art; does your bass player do that stuff? What’s his name again? It’s good to not JUST be the bass player, isn’t it?
JQ: Yes to all. Evan Wolff is our visual ambassador to the world. Over the years, he has made illustrations, painting, collages, sculptures, cartoons, and stop animations to translate our anxious style of rock ‘n’ roll to the world.

JM: How long ago did you make this? I think it was years ago that you showed me the record unmastered, etc.
JQ: This album was recorded a few years ago, yes. At the amazing Candyland Studio, with its owner and engineer Mike Montgomery, across the River from Cincinnati in Dayton, KY. It had been finished for quite some time when I went back to the studio to properly mix it, just as coronavirus was being born. I really liked the results and wanted to take my time with it, as I’d felt we rushed some of our prior releases.

JM: Whats up in Ohio? You’re getting to play live again? That’s cool. I can’t wait to see you rock.
JQ: Live shows have started back in Ohio as of July 2021. I’m still not sure how I feel about that. I’ve grown to love my home studio. Sometimes live shows feel stunting to the growing process.

JM: Is this enough of a conversation? What the hell are we doing?
JQ: How far shall we take it? I’ve got time.

JM: Now ask me about my stupid band….

JQ: First off, Dog Heaven. When I see the boys in that band, I ask myself, ‘dog, am I in heaven?’ How DID you find such man meat for us hungry dogs?
JM: It was organic; those other three pooches have been in my life for many years. Billy, Josh, and I are from Swansea. Rez and I have been playing music together since 2009. We formed the band just to play a string of shows supporting Kentucky’s own, John Hays. We thought some friends would come out to his show and fill the small pub, if we formed a group for the night. Playing was fun, so we thought we should carry on being a
band.

JQ: Your previous band was called Ssssnakes. Are you biological rockers, or just beastie boys?
JM: We have ploughed and sewn the same soils, fished the same ponds. Our parents all live in different houses, though.

JQ: Now that you mention it, what is up with Ohio? What is Rad Girlfriend Records, and why is an English band releasing an LP on an independent label from Dayton, OH? Can anyone in the band locate Ohio on a map?
JM: It’s a small world, isn’t it? Josh Goldman, of said label, is a wonderful human and does a good job of being open-minded to putting money into releasing a record for brand-new groups such as this one. I remember him telling me that his label would always put out music I was making, so I took him up on that when this record was made. His word was the truth.

JQ: As a blatant attention-grabber, I was curious; what was the inspiration to the song ‘Kiss Me (I’m A Toad)?’
JM: I was once in Ohio with someone who had a truly uncanny resemblance to yourself, Jerome. Uncanny! This particular character’s name was Whiskey Whispers. He proclaimed that when he drinks in excess, his hair and nails grow rapidly. Myself and Dylan McCrantney argued that it’s more likely that he was so drunk he was losing all track of time.

Whiskey started humming that line as a tune, and we joined in and sang in chorus; ‘Kiss Me—I’m A Toad.” The four of us (John Hoff was onboard too) quickly went and cut the song to wax. Dog Heaven have now completely stolen the tune. RIP Whiskey Whispers. Your legacy lives on through your music.

JQ: ‘Quarantine Song’ is a perfectly blunt title for a sentiment we can all relate to. How was your quarantine experience unique? Was it in any way the same as anyone else’s? The video for the song is very hopeful; is your band promoting positivity?
JM: COVID really screwed the pooch on all the plans I had for a new adventure with my wife, Victoria. We were supposed to have a wedding party with lots of cool bands and people in Swansea and then move to the States and finally live somewhere together after some years of back-and-forth across the pond. We both moved out of our places, and then the pandemic started.

The U.S. Embassy in the U.K. closed for six months, so all the visa applications have become backlogged to hell. I’ve been waiting two years now for something that was supposed to take seven months and haven’t lived anywhere properly since I moved out of my flat in February 2020.

Since then, we have traveled through Mexico, all through the States, and back through Mexico again. All at a time when you’re supposed to stay home. We’re still floating in a limbo of feeling unsettled and can’t wait to have somewhere that feels like some sort of home for a while. It’s been a journey … that is not over yet. No, I don’t think we are promoting positivity.

JQ: Who are the hunks behind Dog Heaven? Can they all speak Welsh? Individually, what do they do? Why did you pick them, and why did they pick you?
JM: They are three friends that have been in my life for many years. Josh and I grew up together in Swansea. We met when we were 12 or 13. His dad is in a successful psych-rock band called MAN. As kids, we’d rehearse in MAN’s space, and Josh and his dad, Martin, would record us to mini disc and be very encouraging.

Now Josh is in MAN, and they play gigs to lots and lots of old men who took too much acid in the ’60s. Billy is also from Swansea but eight years younger, so we didn’t do a lot of interaction as younger kids because of the age gap. We have become brethren since being in London together the last six years or so. He plays in multiple bands; everybody wants a piece of Bill Morris.

Then there is Reza, the Iranian strong man. Rez and I met when we were 19 or something; he was in Uni in Wales, and our bands played together. We have done lots and lots of music together since. He is my favorite drummer and has the best laugh. None of us can speak Welsh, further than some pleasantries. We are complete posers who all live in London but claim to be Welsh as fuck, but …

JQ: I believe you host a radio show, is that correct? What is that called? What is that all about? What are you trying to communicate over the airwaves?
JM: My best bud Rhys Lowis Stephans and I dabble. Some years ago, we had a show with over 100 episodes, called Cool Dudes Radio, where we play 10 songs and talk about things that mainly have nothing to do with the songs. Quite often on another wavelength entirely.

We resurrected the show during the lockdown on Swansea and made a few more episodes. It was very fun to hang out and listen to music together. His fiancé, Stu, and Victoria, joined in also. The theme song that made for it was excellent, Jerome. One listener wrote in to say, that is always the best tune we play. You can listen to it on Spotify if anyone wants to …

JQ: Tattoos are big these days. Do you have any?
JM: Yes, but I wish I didn’t. They are big, aren’t they? I think it would be better not to have any. Or just a few super cool ones, like Snake from The Simpsons. 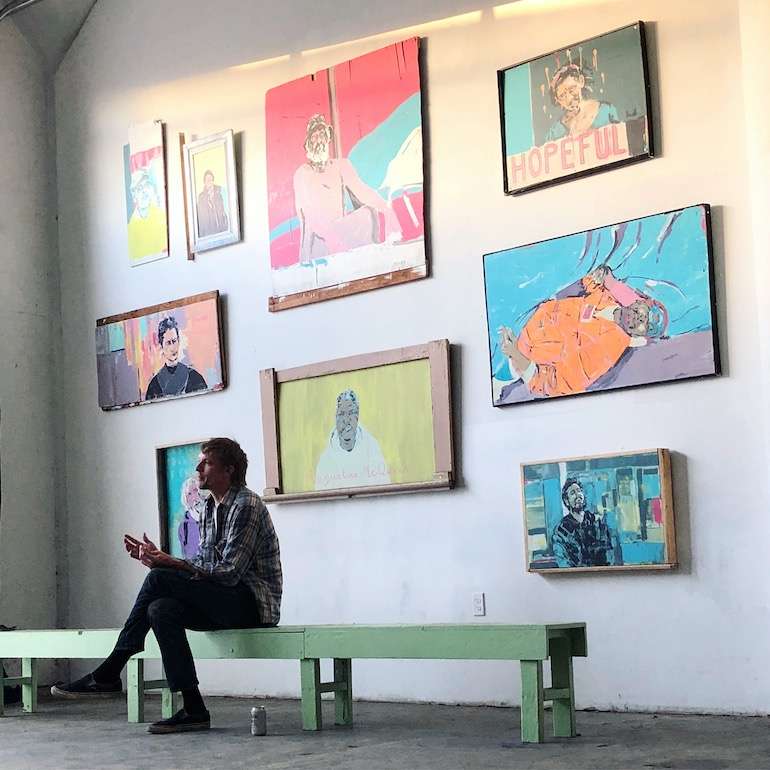 JQ: I must admit, I am aware of your visual artwork and am a
fan. I’ve noticed you paint the people of the streets, and donate earnings directly to the individuals that you paint. Is this something you’ve been doing a while? Do you meet these people? Do they like your renditions? Is there someone in particular that’s made a lasting impression on you from these interactions?
JM: Thank you Jerome. You and your partner, Ava, have done so much to help me when I’m in the States! The paintings you’re referring to are part of a project my friend Joshua Coombes and I do called Light & Noise. We have put on multiple, city-specific art shows to try and raise some awareness and funds for the people in those cities that get overlooked, people experiencing homelessness.

I paint portraits of people we meet, and we include other local artists in each place and try and sell the works and give the money directly to the people in the paintings or to a local homeless shelter or relevant charity that helps people directly. We have done about a dozen of these shows now, all over the world. I’ve met so many amazing people and learned so much from them. Some of the folks we met are now friends in my life that I stay in touch with regularly. 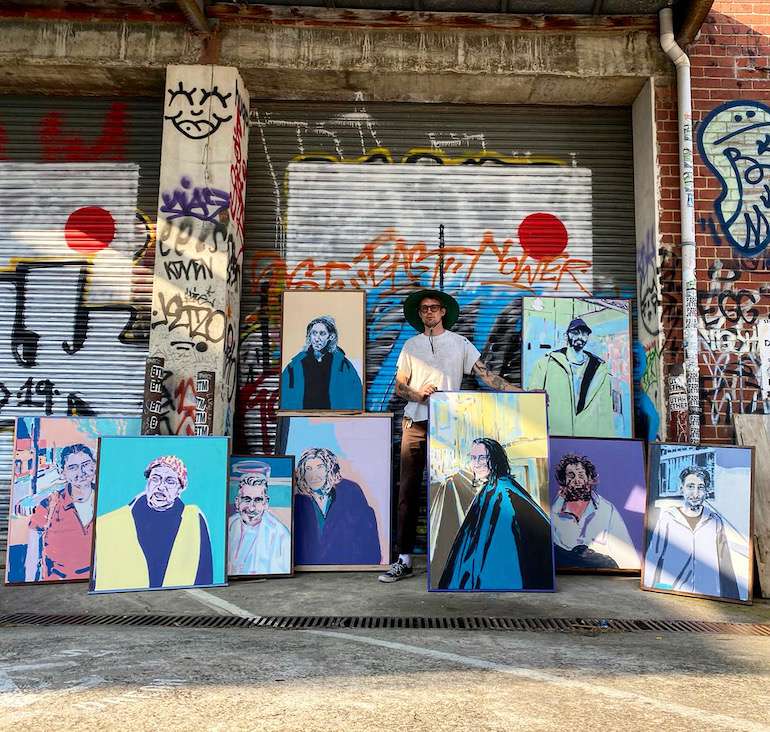 JQ: When is the Vacation and Dog Heaven North American/South
American/U.K./European/Australian/Asia livestream happening?
JM: Share the wifi password with me man; let’s do it! Love you
lots, Jerome. Can’t wait to rock together again soon.

For more from Jamie Morrison and Dog Heaven, find them on Bandcamp.

For more from Jerri Queen and Vacation, find them on Bandcamp.