On their new album, Glue, which dropped this week via Pure Noise Records, the fierce, U.K. punk group Boston Manor present a passionately sincere, emotionally accessible perspective of a world in chaos.

The band have developed their sound far beyond the most familiar basics, and Glue bursts with a range from the soulful, somber contemplation of tracks like “On A High Ledge” to the emotional, desperation-wracked blasts of lead single “Everything Is Ordinary,” which feels like an angry confrontation with humanity’s tendency towards destruction of the extraordinary. 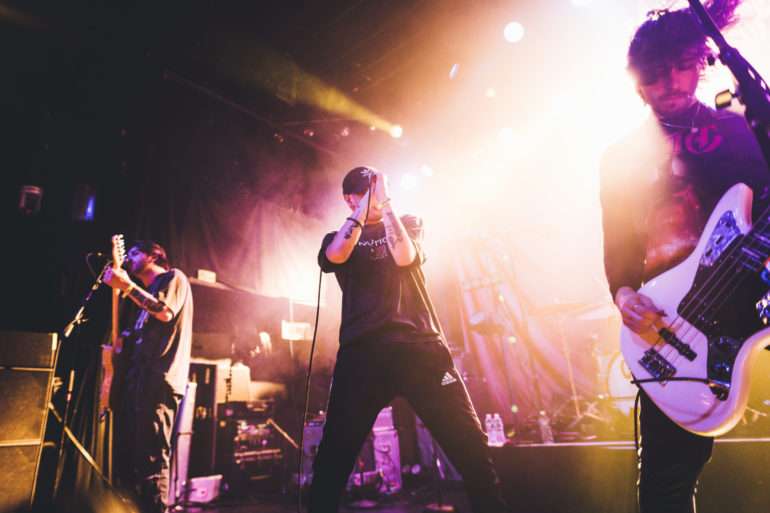 “I think volatility is a good word to describe it,” the band’s vocalist Henry Cox explains. “In terms of the climate that it was conceived in, and also musically itself, it’s a quite volatile record. It’s very sure of itself, which I didn’t think it would be going in, because there was so much uncertainty around producing it and making it.

“But I think once we kind of got rolling with making this album and the subject matter, and when we really kind of dove into this record and realized what it was, I think we became very confident, and the songs kind of became very confident in themselves. They started to take a new form. I don’t want to use the word ‘aggression,’ but there’s definitely an anger about the record, but it is quite volatile.”

When Boston Manor first got together in 2013, the group stuck to a more traditional, pop-punk-style sound with an extra dose of (also traditional-feeling) hardcore-esque ferocity. Over time, through points like the ominous, atmosphere-wracked, 2018 album Welcome to the Neighborhood, the band have expanded their sound tremendously. They gradually began to utilize dynamic swings throughout the music that delivered an extra personalization to the songs.

“It’s just me kind of literally finding my voice as an artist,” he explains. “As the songs kind of got more tuneful and melodic and had more dynamics themselves, that kind of gave me more room to explore my lower range.”

For inspiration, the band have drawn from a slew of styles outside of traditional, heavy music, ending up with their truly personalized, sincere take.

“I love singing more soulfully and softly,” Cox shares. “I listen to a lot of like R&B, and soul, and all sorts of stuff, and I like a lot of those kinds of singers, so I always kind of wanted to sing like that. So, I think it’s been about trial and error, really, and playing the songs live a lot. I think you develop those qualities on the road, personally.”

For the Glue development process, Cox praises the band’s shift to writing more of the songs in the studio.

“A lot more of this record was kind of written in the studio than the previous one, and I really like that because I think it gave us so much more room, because you’re really in that space and there’s no distractions,” he explains.

The process hasn’t always been easy, but Cox explains that the band have persevered anyway. In fact, he shares, they’ve leaned into elements that once seemed like drawbacks amidst the turmoil of developing their latest songs. Originally, he notes, the group was taken aback by how much range emerged during their most recent writing.

On their latest album, they’ve accompanied their increasingly personalized music with a selection of lyrical contemplations about issues like toxic masculinity’s effects on those who might not fit the mold, which Cox explores in the song “On A High Ledge.”

“The whole man-up culture—I mean, it’s very prevalent in all the world, but particularly in where I grew up in the U.K., and the kind of people that I knew—there was a lot of it,” he explains. “And I always felt that was an element of my personality that I had to keep quite muted, because it wasn’t encouraged. Just in terms of things like, I was into theater; I was quite a sensitive kid; a lot of my friends were girls; I liked to paint; I was a musician—all that kind of stuff.”

Although Cox shares that he himself escaped major bullying for not fitting in with the tough-guy stereotype, he explains that he’s been concerned about toxic masculinity for a while now.

“Why is it that this element of my personality, and a lot of people that I know’s personality, is very frowned upon and discouraged?” he asks. “Why do I have to suddenly pretend to be interested in soccer and all that sort of stuff?”

There may not be easy answers, but Cox does share that he’s thankful for the progress made within Boston Manor’s own music circles—although he does offer a caveat, noting that the need for more progress should not be taken for granted.

“Sometimes, I think we don’t realize how good we’ve got it,” he says. “I think we are at the forefront of progression and change—and so many people aren’t looking to be in those communities where we’re having these conversations and making these changes. And that’s what I want to see change, is our world is doing great, I think, it’s still got a way to go, but it’s doing great, but there are still so many communities and scenes even that are still very much stuck in the past, and that’s a problem.”

Glue can serve as a soundtrack to confronting these issues head-on. Boston Manor are one of the many groups who had to postpone tours amidst the global COVID-19 pandemic, but Cox explains that they both have been and remain a very live show-oriented band. He calls shows the “best sort of string to our bow,” and says they’re anxious to get back on the road.

“We’ve always been first and foremost a live band,” he explains. “And that’s kind of why we did this—to start playing live shows.”

Glue is out now; pick up a copy here.

PrevInterview: Sam Russo on New Album, ‘Back To The Party’
Interview: Anders Nyström Of KatatoniaNext