If you’re a fan of being repeatedly beaten over the head by massive grooves with an intensely heavy guitar tone, Conan is your new favorite band. The first time I heard this massively punishing power trio from Liverpool, I couldn’t get over just how heavy and pummeling guitarist Jon Davis’s guitar tone is. With the release of Blood Eagle via Napalm Records this year, their unique brand of groove-laden amp-worship is going to decimate a ton of new ears and necks. In this chat with Davis, he details how Blood Eagle came together, how he creates such a massive tone and what it’s like recording in his new home studio.

In 2012 when you released Monnos, the album immediately gained a lot of respect in the media as well as a lot of new fans. At what point did the writing and recording process for Blood Eagle start and how much did the buzz generated by Monnos affect the band’s mindset going into that process? 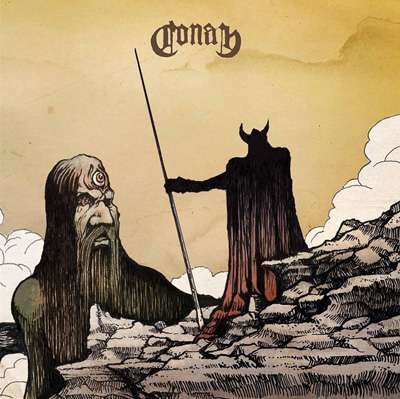 You’re right, Monnos did get some pretty good responses from not just reviewers online, but also crowds at shows and it marked a phase in our development where crowds were getting into us a little more. Not just standing there with their arms folded nodding their heads, but actually causing some movement, some jumping around etc – we knew we had captured the imagination a little bit. We have a pretty unusual sound, higher pitched vocals, low rumbling bass and guitar and mid paced charging riffs – I guess people were glad to get something new and went with it. The new album writing started pretty much after Monnos came out. We started writing some tracks that became “Foehammer” (originally called “Cavehammer”), “Gravity Chasm” and also a third track called “Domed Iron Boss”. We recorded demos of these tracks in December 2012 at Full Stack Studios (Matt Richardson from Bastard of The Skies) but “Domed Iron Boss” didn’t work so we dropped it. The other two were pretty cool so we decided to write an album around them and started work on the full length. We used Monnos as a reference point as well as Horseback Battle Hammer and kind of picked out the bits we liked about both albums and drew inspiration from them. We naturally fell into this pattern of mid paced riffs, slow grueling passages and the album grew from there.

How soon was it after the release of Monnos that you signed to Napalm Records and what is it you liked about the label that made you choose to sign with them?

We were happy to release this new album on Burning World Records, as they had been awesome all the way thus far. However, when Sebastian (Napalm Records) contacted us (after we played with label mates AHAB in Leipzig – Feb 2013) we were very impressed with the professionalism, friendliness and openness displayed by Sebastian). It made me think that Napalm would be a label I would enjoy dealing with on a daily basis. The sizeable distribution network and ‘pulling power’ of the label was not something we thought about at the time. Instead we went with our gut instinct and chose Napalm (over a couple of other amazing labels) and we did it just by trusting our instincts.

I read that Blood Eagle was recorded at Skyhammer Studio, which you built and own. How much easier did it make the recording process knowing that you guys had full control over everything in regards to studio time and equipment and whatnot?

In a lot of ways (equipment / studio time) it was exactly the same as what we had done at Foel. Chris Fielding (who produced everything we have ever done so far – www.facebook.com/chrisfieldingproducer) works with me at Skyhammer Studio now and we basically went into the studio as fully paying ‘clients’ and our mental approach was just the same – we were there to make the best album we could with the equipment at our disposal. There is quite a large selection of amazing amps at the studio and we were able to use the same amps that I used at Foel (old Matamp GT120 and an old Sunn Model T) into the same cabs we used last time too. One of the nice things was that I was able to help out at home around tracking sessions, which helped loosen that feeling of cabin fever you can sometimes get during the recording process. 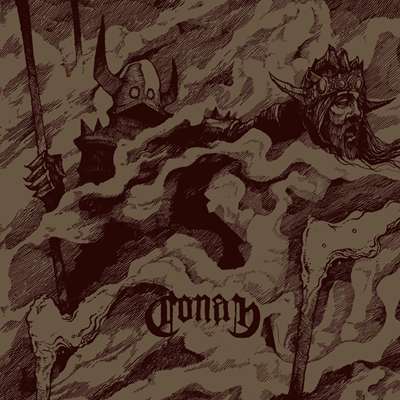 Also, what is it you like about Chris Fielding’s production style that made you choose him to produce the new record for you at Skyhammer?

Chris Fielding has recorded everything we have ever done, so he was the only producer we wanted to work with. He knows exactly what we want to sound like and is into the band also, so it was just the natural choice.

Obviously the thing that stands out most about Conan is your incredibly insane guitar tone. Could you tell me a little about how that tone was created and what equipment you use to create such a mighty sound?

Sure, on this album I had a Travis Bean (a modern day designed one by www.travisbean.de) that I traded a load of gear for in Hamburg last year, into a Dunwich Amps ‘Fuzz Throne’ pedal, into a 70s Matamp GT120 and a 70s Sunn Model T.

Typically, bands that have the kind of insane tone you guys have usually play much slower and include very little groove. When you decided to use that huge tone, how did the process of adding groove and playing upbeat with it come about?

I think it is just something that has worked its way into our sound over time. We want to sound heavy obviously, but we do not want to keep treading the same ground as everyone else. I guess we’ve found a sound that is pretty unique to us and we enjoy playing this way.

Did you find any difficulty initially creating faster riffs and rhythms with such a huge tone or did it come pretty naturally for you?

Nah, that bit came naturally enough. You will see that a lot of our slower songs have up tempo endings. The faster stuff on Blood Eagle is ‘faster’ than the fast parts of other tracks we have done and this just kind of evolved. We love playing the slower stuff as well as the fast stuff so it all works fine for us as long as we don’t repeat ourselves or rip people off.

When listening to your lyrics, it’s obvious your songs are inspired by a lot of fantasy and science fiction. Are there any particular books or movies that have had a major impact on the subject of your lyrics?

Yeah, we love all the old sic fi / fantasy / sword and sorcery stuff. I think a good start would be Conquest by Lucio Fulci, Clash of The Titans (original version), Fire and Ice, Jason and The Argonauts and of course the Conan novels. They are all good sources of inspiration for us and of course help to provide us with lyrics and ideas for songs.

I’ve been paying close attention to your tour schedule since discovering you guys after Monnos came out and the one thing I’ve noticed is that you seem to only tour in the UK and Europe. Is this done intentionally or is there a chance that you’ll be touring North America at some point soon.

Well yeah we have toured quite a lot, we think it’s important that we play as often as we can, that is the real purpose of a band after all I guess. Touring in the US is, unfortunately, very expensive to do legitimately and up to now we have not had any viable offers to play over there. However, we have played many shows in Europe and still have a lot of growing to do as a band…. It’s not like we are the biggest band in Europe and the US is the last barrier between us and AC/DC, so we will continue to play shows where we can and if a decent opportunity comes up in the US then we’ll see what we can do. We can’t do it without some help though, so I guess we’ll just have to hope that Blood Eagle does well over there.

Pick up a copy of Blood Eagle here.