“Sometimes you just want to cuddle, you know?” says vocalist and keyboardist Kevin Ratajczak of the German-electronicore band, Eskimo Callboy. Ratajczak is talking about Eskimo Callboy’s idea to add an acoustic track to their latest album, We Are The Mess, and it couldn’t be a more unexpected twist for the metal and dubstep influenced group. “We once played an acoustic version of our song ‘Prom Night’ in a music store in Germany,” Ratajczak continues. “It was spontaneous and not very good. But we liked it. For We Are The Mess we needed a bonus track for our special edition. And so we decided to do that version of ‘Never Let You Know.'” 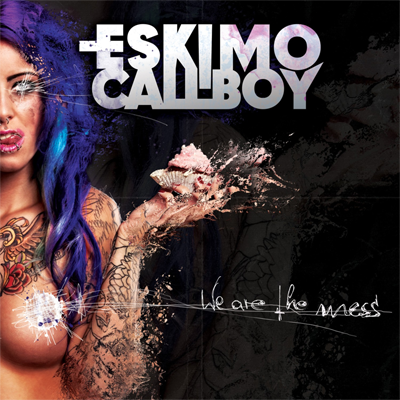 Eskimo Callboy has branched out in a variety of different styles, both musically and lyrically, since their 2012 breakout record, Bury Me In Vegas. “Today’s music is so diverse, it’s almost impossible to put five bands in a genre without neglecting their uniqueness,” notes Ratajczak. “But I think for We Are The Mess things have changed a little bit. We tried to tell stories with a little twist. I would say, the lyrics are slightly more ambitious than on our last record, and definitely worth reading.”

Tracks like “Ghosts of the Night” fit perfectly into this new story-telling realm. “‘Ghosts of the Night’ is one of the more subtle ones. We thought about a group of friends, running through the city, followed by all the lights, but also by the problems of their everyday life which are basically caused by the shifted moral values of today’s society,” notes Ratajczak. “In this song, we try to tell a little story of that group, that breaks with these values for this one night. They feel haunted, but they know what it all comes down to: love, equality, friendship, but also the will to fight what’s wrong. And all this unites them!”

While writing, the guys of Eskimo Callboy even took to some very unorthodox methods for their latest album. “Organization and order were not the attributes on which this band have been formed on,” Ratajczak explains. “Things like deadlines or schedules are a killer for any form of creative work…But we found a way to solve the problem: We simply don’t give a fuck! Being put on stress makes you slower than just letting it flow. And so we keep on lying to ourselves that there are no deadlines!”

And so far this attitude has paid off as not only the German and American scenes put forth their support for Eskimo Callboy, but the band received glowing recognition in the 2013 Metal Hammer Awards by dominating in the Best Up-and-Coming Artist category. “In some ways the German metal scene can be quite narrow minded, but only because it needs some time to accept new things,” says Ratajczak. “But a very positive aspect is, when it once has accepted you and the stuff you make, it supports you to the fullest…in any thinkable way!” So it is should come as no surprise that EDM and dubstep influences are prominent factors in We Are The Mess with songs like “Broadway’s Gonna Kill Us” and the album’s title track. “If you write an album that is full of hard metal riffs and breakdowns, there always comes a point where you try to soothe it a little bit…That it contains parts of dubstep-kinda music is more a fact of that we like dubstep a lot. The calming factor is much more important.”

“One of the biggest ideas of our band was to never set limits to our creative minds,” Ratajczak explains. “I would say, our biggest influences were our very different tastes in music.” These different musical outlets have helped to shape Eskimo Callboy just as much as their own personal experiences as the band has gone from a Katy Perry cover and a “party hard” debut release to an album featuring a sophisticated, yet fun combination of dubstep, metalcore, synth-pop, and even some toned-down acoustic. “As a band, you don’t always feel the same, and you don’t always like the same things. So that’s why a record is often just a snapshot of the feelings and impressions of the band during a certain time. When writing a record, we always try to forget everything and do what we love in that special time. It’s like a new beginning with every new record.”


Purchase We Are The Mess here: iTunes | Physical 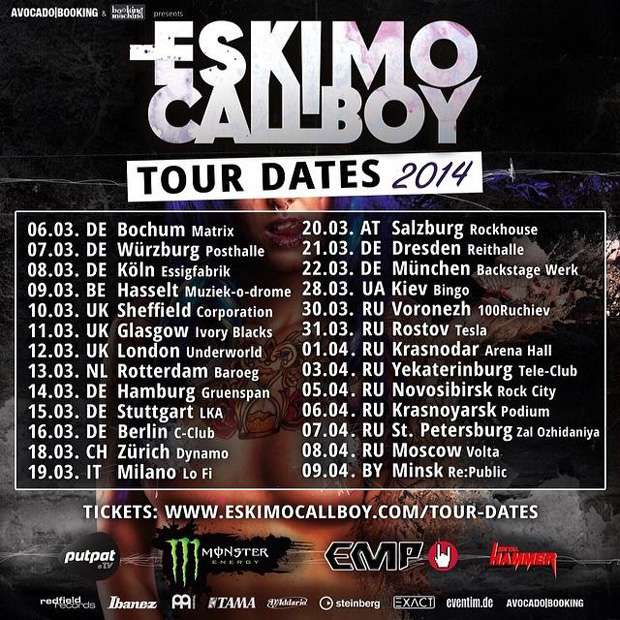 PrevInterview: The Dollyrots Talk About Motherhood and Pledge Music
Northcote Has Punk Rock In His DNANext